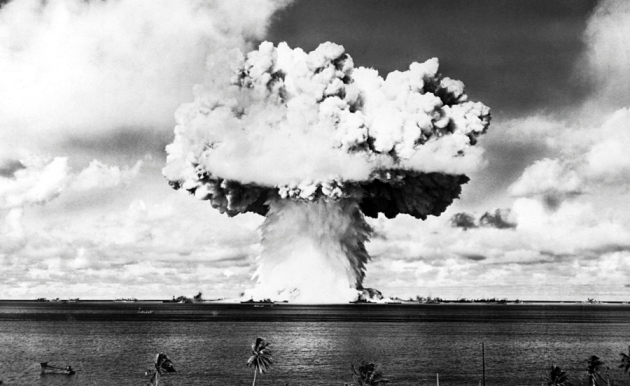 The detonation of nuclear weapons has left a radiological signature in the geological record.

For historians, the first atomic bomb blast in 1945 ushered in the nuclear age. But for a group of geologists, the 16 July test at Alamogordo, New Mexico, marks the start of a new unit of geological time, the Anthropocene epoch.

The term Anthropocene was coined 15 years ago to refer to the age of widespread human influence over the planet. Ever since, geologists have debated when people first left a clear mark in the rock record, and whether to enshrine that moment as the start of a formal geological unit. Some researchers have proposed setting the beginning of the Anthropocene — and the end of the current epoch, the Holocene — at the start of the Industrial Revolution, or even further back, at the dawn of agriculture. Others look to the vast expansion in human activity in the second half of the twentieth century.

Now an international group of scientists has thrown its weight behind the latter possibility, and suggested using the first nuclear blast as a starting point. “It’s a well defined spot in time — it’s a big historical event,” says Jan Zalasiewicz, a stratigrapher at the University of Leicester, UK, and lead author of the paper published this week1.

Zalasiewicz did the study with 25 other members of a working group that is exploring whether and how to formally define the Anthropocene. In their paper, the researchers propose that the boundary should be defined by the first A-bomb test in 1945 and the stratigraphic presence of radioactive elements from that blast and the much larger nuclear ones that took place over the next decade.

These radionuclides, such as long-lived plutonium-239, appeared at much the same time as many other large-scale changes wrought by humans in the years immediately following the Second World War. Fertilizer started to be mass produced, for instance, which doubled the amount of reactive nitrogen in the environment, and the amount of carbon dioxide in the atmosphere started to surge. New plastics spread around the globe, and a rise in global commerce carried invasive animal and plant species between continents. Furthermore, people were increasingly migrating from rural areas to urban centres, feeding the growth of megacities. This time has been called the Great Acceleration.

Other researchers argue for a different start of the Anthropocene. Last week, Matt Edgeworth, an archaeologist at the University of Leicester, and five other researchers proposed that the boundary should be defined as the first geological deposits to be altered by humans, such as layers in archaeological sites that are filled with pottery debris, or soils that had been ploughed for agriculture2.

This 'archaeosphere' appears at different times in different locations, much like the demarcations often used by archaeologists to define cultural change. In the Neolithic transition, for example, agriculture took root in the Middle East's Fertile Crescent thousands of years before it spread to Europe.

Colin Waters, a geologist with the British Geological Survey in Keyworth, and an author on both papers, says that the working group is still exploring a number of ideas. “We’re nowhere near coming to a definition at this stage,” he adds.

The working group’s goal is to put out some specific ideas that will provoke discussion, says Zalasiewicz. In 2016, the group plans to forward a formal recommendation to the Subcommission on Quaternary Stratigraphy on whether and how to define the Anthropocene. That body will consider the proposal and pass along its decision to the International Commission on Stratigraphy, which has the ultimate authority over setting new geological time units.

This process normally happens at a slow — even glacial — pace; it can take decades to define a new epoch or alter an existing one. The 2016 goal, says Zalasiewicz, "was a compromise between a number of people who said, ‘why didn’t we decide in a week or a month’, and the [much longer] kind of timescales taken often by working groups”.