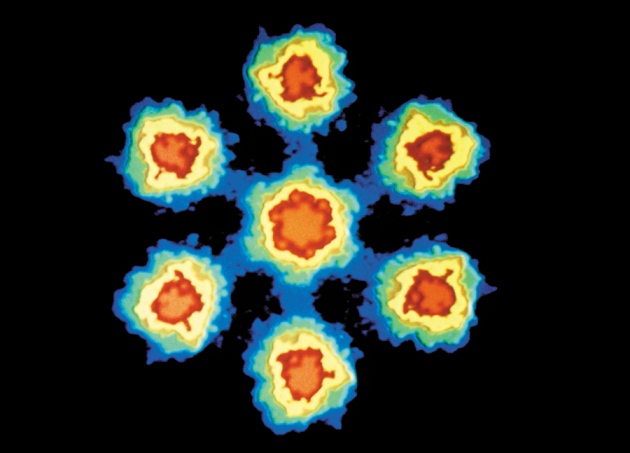 Scanning transmission electron microscopy has been used to reveal the hexagonal arrangement of the uranium atoms in a solution of uranyl acetate.

Electron microscopy is on the brink of a transition. Soon the imaging tool could be used to create structures atom by atom. This sort of control over atomic architecture could transform our basic scientific understanding of materials and pave the way to new classes of devices for quantum computing, spin sensing and more.

Currently, the only way to build at the atomic scale is with a scanning tunnelling microscope (STM). But this approach remains impractical and niche, 25 years after Don Eigler demonstrated it by spelling out the name of his company, IBM1. An STM can move only surface atoms and structures that are stable only at low temperatures. The technique is time-consuming and it requires bespoke machines. It can now make computing devices comprising several quantum bits (qubits), but not much more2.

Electron microscopy is reliable and widely used to view thin sections of materials. It uses a beam of electrons to reveal the material's crystal structure (see 'The atomic forge'). However, the beam can nudge atoms out of alignment and alter the material's form. This is a problem for imaging, but could be a boon for fabrication — as long as the modifications can be controlled.

For building at the atomic level, scanning transmission electron microscopy (STEM) seems to be the most promising form of the technique. An electron beam as fine as an atom is scanned through the specimen to probe its structure3. Several groups have used STEM to transform the compositions of layered materials in places4, 5, crystallize amorphous oxides6, move atoms between spaces in a lattice7 and knock out single atoms from one-layer materials.

Manipulating atoms with STEM will require three key developments, practical and theoretical, which we outline here. Practically, we need better real-time monitoring, feedback and beam control. These systems should use imaging methods8 based on diffraction signals. They will need detectors capable of being read out fast and 'big data' computation methods capable of handling high volumes and rates of data while performing analytics in real time. Materials scientists must also refine theories of how electrons and matter interact.

A scanning transmission electron microscope (STEM) fires a beam of electrons through a sample of material to pinpoint atoms and reveal the material’s crystal structure. For imaging, the downside is that the beam can move atoms slightly. But if these modifications can be controlled, it could be a boon. New materials could be built atom by atom by controlling the electron beam precisely. Such bespoke materials might enable new classes of devices for quantum computing, spin sensing and more.

Control the beam. In standard STEM imaging, an electron probe scans back and forth across the specimen. Commercial imaging systems typically trace only a zig-zag pattern over a rectangular area, because arbitrary beam paths can distort the image. To deliver a prescribed number of electrons to a specified location at a particular time demands full control over the position, velocity and power of the electron beam. Fine control is also useful where different parts of a sample react differently to the electrons or when only a portion of the field needs to be examined. Different scanning paths are useful, however. For example, spirals are faster to scan because they avoid abrupt changes in direction and deliver electrons more evenly9. The small, high-end manufacturer Nion in Kirland, Washington, has made its beam-control software open source so that researchers can develop models for different scanning strategies. Others should follow suit.

Monitor and feed back in real time. Irregularities and defects in lattices blur STEM images. To build atom by atom, irregularities need to be spotted and located quickly so that the fabricator can decide whether to correct, adjust or leave them in place. Currently, the best way to do this is to keep rescanning. This is too slow.

Researchers will need to be able to monitor and respond to detector signals in real time. Through a system of immediate feedback, the beam could be controlled to alter the rate and extent of modifications or reactions. Until that becomes available, regular rapid scans of small areas (such as 10-millisecond spiral scans of 1 nanometre square) could be used. Images would need to be analysed in real time and algorithms developed for adjusting the scanning trajectories. The speed and quantities of data involved would require powerful computers and software.

“Electron-microscopy centres should help the community share knowledge about observations.”

In the long term, diffraction patterns could be used to track lattice structures, as is currently done in scanning-diffraction imaging. Collecting transmitted electrons on a pixellated detector instead of a single ring preserves more information. For example, the electron beam may scatter off new or missing atomic columns or be affected by symmetries and asymmetries in the surrounding crystal. Libraries of standard diffraction images can be consulted to show that a structure has been fabricated successfully.

Improve theory and modelling. Knowing more about how the electron beam interacts with matter is crucial for predicting how the fabrication system will behave. For instance, researchers need to know how slight changes in the positions of atoms in a column affect scattering. A better grasp is needed of coupled nonlinear effects, such as how the beam changes a material and thus how the two interact subsequently.

Greater understanding is needed of how electrons lose energy as they pass through the lattice (such as through collisions with atoms or by exciting acoustic modes). Such information will help to predict which strong interactions will knock out single atoms or displace them in cascades. The formation of new, stable configurations should be explored.

All this knowledge would allow fabricators to exploit subtleties such as the way a material responds to scan direction, path shape or the pulsing of the beam. The prize will be worth the effort: the researcher who can devise a scan path to steer an atom to a predefined location will be able to make materials for quantum computing.

Realizing these opportunities will require interdisciplinary research. Those who work on electron microscopy, data analytics, image analysis, quantum computing, microfabrication, theory, molecular dynamics, computer visualization, artificial intelligence and instrument engineering must come together. Such diverse teams are rare, and each community has a different language and motivation.

To nucleate this effort, we propose that professional societies and think tanks host interdisciplinary workshops to discuss the feasibility and specific needs of atomic fabrication using STEM. Technical advances in the spatial resolution of STEM are equally important, laterally and along the beam.

Electron-microscopy centres should help the community share knowledge about observations, atomic configurations and beam-induced phenomena by setting up open and searchable databases with analysis tools. Common data formats and cloud computing facilities are needed to support data analytics. Our community should look to exemplars in other fields, such as X-ray, mass spectrometry and crowdsourcing platforms in high-energy physics, astronomy and genomics.

Let us make a start: the ability to build new forms of matter from the atom up will mark a new chapter of nanoscience.