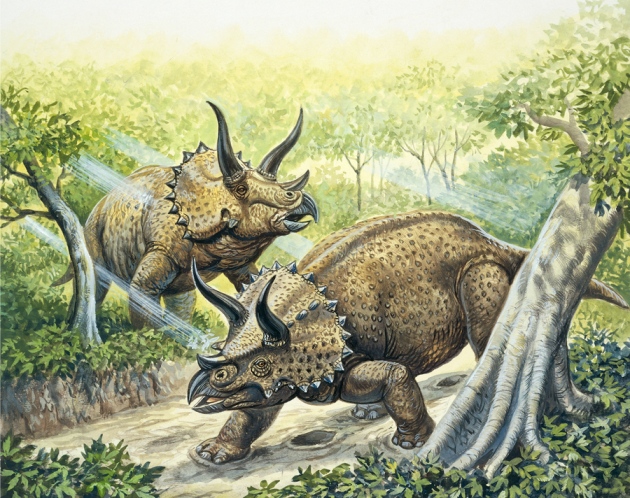 The late-Cretaceous Triceratops were among the majority of dinosaurs that had featheless, scaly skins.

Birds evolved from dinosaurs, and dinosaur fossils are often covered with impressions of feathers, which made some palaeontologists speculate whether feathers were a common trait that appeared early in their history. Now a team analysing feathers on the overall dinosaur family tree argues this is taking things too far.

Palaeontologists have known for about two decades that theropods, the dinosaur group that contained the likes of Tyrannosaurus and Velociraptor and from which modern birds evolved, were covered in feathery structures from early on in their history.

By contrast, the ornithischian lineage — which contained animals such as Triceratops, Stegosaurus and Ankylosaurus — and the huge, long-necked dinosaurs in the sauropod lineage were considered to be scaly, similar to modern reptiles. Indeed, all evidence pointed in this direction until the discovery, beginning in 20021, 2, of a few ornithischians with filament-like structures in their skin. This led to speculation that feather-like structures were an ancestral trait for all dinosaur groups.

Keen to know more, palaeontologists Paul Barrett of the Natural History Museum in London and David Evans of the Royal Ontario Museum in Toronto created a database of all known impressions of dinosaur skin tissues. They then identified those that had feathers or feather-like structures, and considered relationships in the dinosaurian family tree.

The results, which Barrett revealed at the Society of Vertebrate Palaeontology’s annual meeting in Los Angeles in late October, indicate that although some ornithischians, such as Psittacosaurus and Tianyulong, had quills or filaments in their skin, the overwhelming majority had scales or armour. Among sauropods, scales were also the norm.

“I’d go so far as to say that all dinosaurs had some sort of genetic trait that made it easy for their skin to sprout filaments, quills and even feathers,” says Barrett. ”But with scales so common throughout the family tree, they still look like they are the ancestral condition.”

The findings provide “a valuable reality check for all of us who have been enthusiastic about suggesting dinosaurs were primitively feathered”, says Richard Butler, a palaeontologist at the University of Birmingham, UK, who was not associated with the study.

Even so, Butler points out that the findings are not set in stone. “We don’t have primitive dinosaurs from the late Triassic and early Jurassic periods preserved in the right conditions for us to find skin or feather impressions,” he says. “This picture could quickly change if we start finding early dinosaurs with feathers on them.”