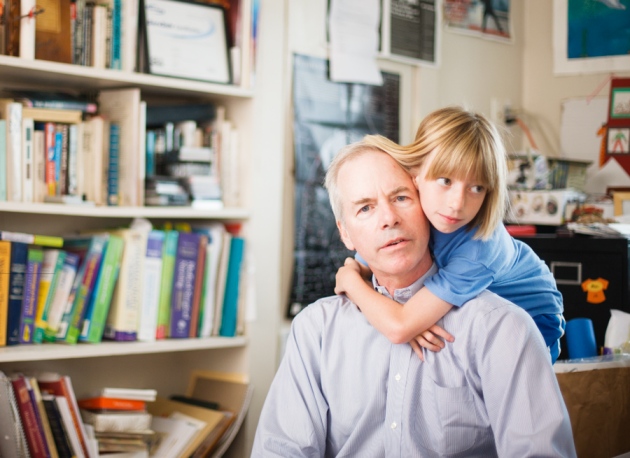 Hugh Rienhoff says that his nine-year-old daughter, Bea, is “a fire cracker”, “a tomboy” and “a very sassy, impudent girl”. But in a forthcoming research paper, he uses rather different terms, describing her hypertelorism (wide spacing between the eyes) and bifid uvula (a cleft in the tissue that hangs from the back of the palate). Both are probably features of a genetic syndrome that Rienhoff has obsessed over since soon after Bea’s birth in 2003. Unable to put on much muscle mass, Bea wears braces on her skinny legs to steady her on her curled feet. She is otherwise healthy, but Rienhoff has long worried that his daughter’s condition might come with serious heart problems.

Rienhoff, a biotech entrepreneur in San Carlos, California, who had trained as a clinical geneticist in the 1980s, went from doctor to doctor looking for a diagnosis. He bought lab equipment so that he could study his daughter’s DNA himself — and in the process, he became a symbol for the do-it-yourself biology movement, and a trailblazer in using DNA technologies to diagnose a rare disease (see Nature 449, 773–776; 2007).

“Talk about personal genomics,” says Gary Schroth, a research and development director at the genome-sequencing company Illumina in San Diego, California, who has helped Rienhoff in his search for clues. “It doesn’t get any more personal than trying to figure out what’s wrong with your own kid.”

Now nearly a decade into his quest, Rienhoff has arrived at an answer. Through the partial-genome sequencing of his entire family, he and a group of collaborators have found a mutation in the gene that encodes transforming growth factor-β3 (TGF-β3). Genes in the TGF-β pathway control embryogenesis, cell differentiation and cell death, and mutations in several related genes have been associated with Marfan syndrome and Loeys–Dietz syndrome, both of which have symptomatic overlap with Bea’s condition. The mutation, which has not been connected to any disease before, seems to be responsible for Bea’s clinical features, according to a paper to be published in the American Journal of Medical Genetics.

Hal Dietz, a clinician at Johns Hopkins University School of Medicine in Baltimore, Maryland, where Rienhoff trained as a geneticist, isn’t surprised that the genetic culprit is in this pathway. “The overwhelming early hypothesis was that this was related,” says Dietz, who co-discovered Loeys–Dietz syndrome in 2005.

Rienhoff had long been tapping experts such as Dietz for assistance. In 2005, an examination at Johns Hopkins revealed Bea’s bifid uvula. This feature, combined with others, suggested Loeys–Dietz syndrome, which is caused by mutations in TGF-β receptors. But physicians found none of the known mutations after sequencing these genes individually. This was a relief: Loeys–Dietz is associated with devastating cardiovascular complications and an average life span of 26 years.

In 2008, Jay Flatley, chief executive of Illumina, offered Rienhoff the chance to sequence Bea’s transcriptome — all of the RNA expressed by a sample of her cells — along with those of her parents and her two brothers. After drilling into the data, Rienhoff and his collaborators found that Bea had inherited from each parent a defective-looking copy of CPNE1, a poorly studied gene that seems to encode a membrane protein. It looked like the answer.

But questions remained. The gene did not have obvious connections to Bea’s features, and publicly available genome data suggests that the CPNE1 mutations are present in about 1 in 1,000 people — an indication that there should be many more people like Bea.

Unsatisfied, Rienhoff went back to Illumina in 2009 to ask for more help. He proposed exome sequencing, which captures the whole protein-encoding portion of the genome, and is in some ways more comprehensive than transcriptome sequencing. At the time, Illumina was developing its exome-sequencing technology, and the company again took on the Rienhoff family as a test group.

The analysis pulled up a mutation in one copy of the gene that encodes TGF-β3 — just in Bea. In cell culture and experiments in frog eggs, the faulty gene seems to produce a non-functional protein that reduces TGF-β signalling. This mechanism would differ from what many suspect is going on in Marfan and Loeys–Dietz syndromes, in which mutations paradoxically amp up TGF-β signalling. A collaborator of Rienhoff is now engineering a mouse that shares Bea’s gene variant, which could help to clarify whether the mutation revs up signalling or suppresses it.

The latest study does not define a new ‘Rienhoff syndrome’. For that, Rienhoff and his collaborators would need to find other patients who share Bea’s features and genetic markers. Rienhoff says that he would be relieved if he found an older person with similar symptoms who seems as vivacious as his daughter, who recently earned an orange belt in karate; it would tell him that cardiovascular complications are not pre-ordained. “If I saw a single case, I might say, ‘Hallelujah’,” he says.