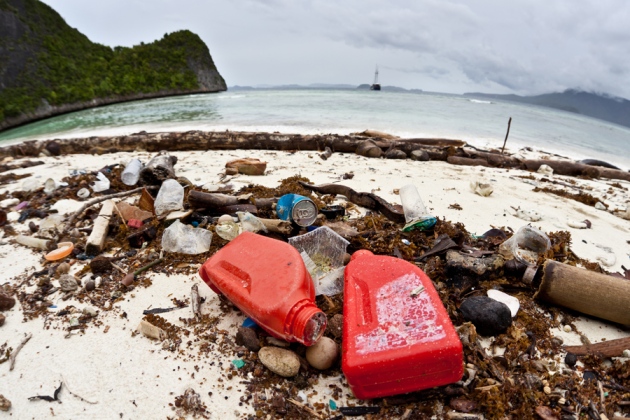 Large plastic items are thought to degrade into microplastic in the ocean, but evidence of this is scarce.

More than 5 trillion plastic pieces, with a combined mass of more than 250,000 tonnes, are floating in the ocean, researchers reported on 10 December in PLoS ONE1.

On its face, the estimate is shockingly high — but it is still much lower than expected, amounting to less than 1% of the annual global production of plastic, says study co-author Hank Carson, a marine biologist at the Washington Department of Fish and Wildlife in Olympia.

A team led by Marcus Eriksen, research director at the Five Gyres Institute in Los Angeles, California, took samples with fine-mesh nets and visually counted pieces of trash on 24 expeditions through all five subtropical gyres — areas of rotating ocean currents where plastic collects — as well as coastal Australia, the Bay of Bengal and the Mediterranean Sea. The team combined its observations with those from other ocean-sampling efforts, then fed the data into a model of ocean-plastic distribution to arrive at the estimate.

The findings are on par with other recent estimates of ocean plastic. A study published in Environmental Science and Technology in April used data from 2,500 samples taken with fine mesh nets to estimate that there are 21,290 tonnes of floating microplastic (particles smaller than 5 millimetres across) in the Pacific Ocean2.

A study published in Proceedings of the National Academy of Sciences in June concluded that the global ocean contains between 7,000 and 35,000 tonnes of floating plastic3. Andrés Cózar, a marine ecologist at the University of Cádiz in Spain, says that the latest estimate is larger because Eriksen and his team counted large items visually, whereas Cózar’s team based their estimate on what they caught in nets. Nevertheless, he says that Eriksen’s study is a valuable addition to the literature.

Eriksen’s team found that microplastic accounted for a small proportion of the estimated mass. Pieces larger than 200 millimetres across accounted for 75% of the total mass of plastic surveyed. But large items such as bottles, buoys and plastic bags would be expected to degrade into smaller and smaller pieces of floating trash. So where is all the microplastic?

The question has bedevilled the field for a decade, says Richard Thompson, a marine biologist at Plymouth University, UK, who coined the term ‘microplastic’ and suggested that plastic was breaking down into pieces so small that they slip through sampling nets. Others have proposed that the plastic is being washed ashore, that small particles are being fouled by bacteria and grime until they sink to the sea floor or that they are being eaten and incorporated into animal tissue and faeces — even that some bacteria are able to digest them.

Thompson finds that last hypothesis unlikely. “Polymer chemists say that all the plastic we have ever made is still with us,” he says.

Some researchers have looked for plastic in remote places such as Arctic ice4 and the deep sea floor. Other studies have analysed seal5 and sea lion faeces. But as of yet no substantial concentrations of microplastic have been found.

Although much of the plastic entering the world’s oceans comes from countries with badly managed or non-existent systems for waste disposal, rich countries produce much more of the sort of plastic waste that is likely to reach the ocean than poor countries do. This includes single-use items such as forks, takeaway containers and shopping bags.

“Going about my day, I really notice all the plastic, especially the stuff that is single use,” says Carson. An order of salad dressing ‘on the side’ often means another little plastic cup, he notes. “I just used that for 30 seconds and now it is going to be somewhere for hundreds or thousands of years. You know, I work hard on my research and I hope it has some impact, but sometimes I wonder: was it my choice to have my dressing on the side? Is that my legacy?”