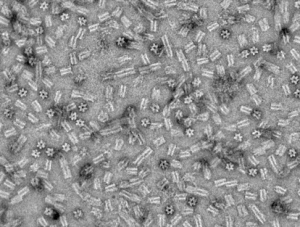 Tiny cog-like and brick-like molecules of DNA were created by the new speedy method.

DNA strands can be coaxed to fold up into shapes in a matter of minutes, reveals a study. The finding could radically speed up progress in the field of DNA origami.

Biotechnologists are itching to be able to use DNA to make nanoscale machines, but so far they have made only simple forms — tubes, boxes, triangles — and the process has been laborious and time-consuming (see 'What to make with DNA origami').

The technique involves using short DNA strands to hold a longer, folded strand in place at certain points, like sticky tape. Until now, assembling the shape has involved heating the DNA and allowing it to cool slowly for up to a week.

But that time has now been slashed to minutes. Hendrik Dietz, a biophysicist at the Technical University of Munich in Germany, and his colleagues stained the DNA with fluorescent dye and watched what happened as it cooled and folded. By stopping the reaction at different stages, they could check how far the folding and sticking had gone.

They discovered something striking: “It turns out that almost for the entire temperature range, nothing happens," says Dietz. But when a crucial temperature is reached, the whole structure forms suddenly. The results are published in Science1.

Dietz analysed the folding of 19 different DNA shapes, including cylindrical, brick-like and cog-like objects. Each shape folded in a specific narrow temperature range somewhere between 45 °C and 60 °C.

After working out which temperature corresponded to which shape, Dietz subjected the unfolded DNA reaction mixtures to these pre-determined temperatures for just a few minutes to see whether they would fold into the desired shape. They did — and with high yield.

DNA-origami experts are excited at the prospect of speeding up their work. “It makes our lives a lot easier,” says William Shih, who works in the field at Harvard University in Boston, Massachusetts, and whose group has already benefited from Dietz’s work. Easier, quicker and more efficient folding will help to take DNA origami beyond simple shapes, he adds.

Dietz hopes that he will be able to use his findings to build a computer model to predict how to make other DNA objects. He noticed that certain traits of the shapes that he made were correlated with the temperature at which they folded — for example, shapes that used longer binding strands folded at higher temperatures. Dietz aims to design nanostructures with optimal folding temperatures close to 37 °C, the temperature at which mammalian cell cultures are grown, so that DNA machines could one day be used in biological settings.