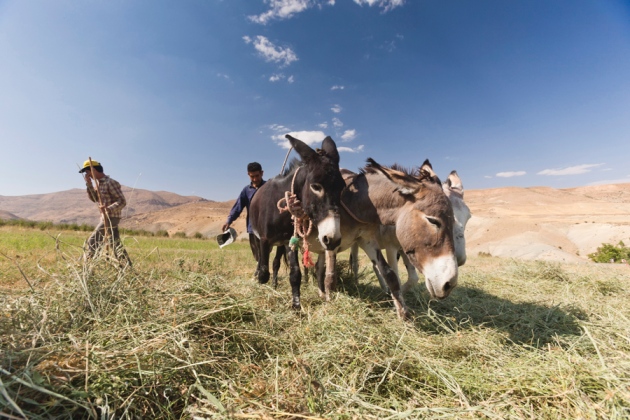 Present-day farmers with donkeys in the Zagros Mountains in Iran, one of the two places in the Fertile Crescent where farming was originally developed.

Two Middle Eastern populations independently developed farming and then spread the technology to Europe, Africa and Asia, according to the genomes of 44 people who lived thousands of years ago in present-day Armenia, Turkey, Israel, Jordan and Iran.

Posted on 17 June on the bioRxiv preprint server1, the research supports archaeological evidence about the multiple origins of farming, and represents the first detailed look at the ancestry of the individuals behind one of the most important periods in human history — the Neolithic revolution.

Some 11,000 years ago, humans living in the ancient Middle East region called the Fertile Crescent shifted from a nomadic existence, based on hunting game and gathering wild plants, to a more sedentary lifestyle that would later give rise to permanent settlements. Over thousands of years, these early farmers domesticated the first crops and transformed sheep, wild boars and other creatures into domestic animals.

Dozens of studies have examined the genetics of the first European farmers, who emigrated from the Middle East beginning some 8,000 years ago, but the hot climes of the Fertile Crescent had made it difficult to obtain ancient DNA from remains found there. Advances in extracting DNA from a tiny ear bone called the petrous allowed a team led by Iosif Lazaridis and David Reich, population geneticists at Harvard Medical School in Boston, Massachusetts, to analyse the genomes of the 44 Middle Eastern individuals, who lived between 14,000 and 3,500 years ago.

The team found stark differences between the genomes of Neolithic individuals from the southern Levant region, including Israel and Jordan, and those living across the Zagros Mountains in western Iran. The Zagros early farmers were instead more closely related to nearby hunter-gatherers who lived in the region before the Neolithic.

This pattern of ancestry adds to the evidence that the hunter-gatherers in the southern Levant and Iran independently developed farming, says Roger Matthews, an archaeologist at the University of Reading, UK, who co-directs the Central Zagros Archaeological Project in Iran.

“There has been a school of thought arguing that everything happens first in the southern Levant and everyone learns how to be farmers from this initial dispersal,” he says. “But the archaeological evidence shows very strong local traditions that are clearly not in communication with each other, persisting for centuries if not millennia.”

The Zagros farmers domesticated goats as well as cereals such as emmer, whereas their counterparts to the west had their own crops, including barley and wheat. Around 9,500 years ago, these traditions began spreading around the Middle East, Rogers says, noting that the two populations of farmers may have mixed in eastern Turkey while seeking out sources of obsidian, which was useful for making tools. By the time farmers in present-day Turkey began migrating to Europe, they carried a 'Neolithic toolkit' that included crops, animals and tools from both farming traditions. 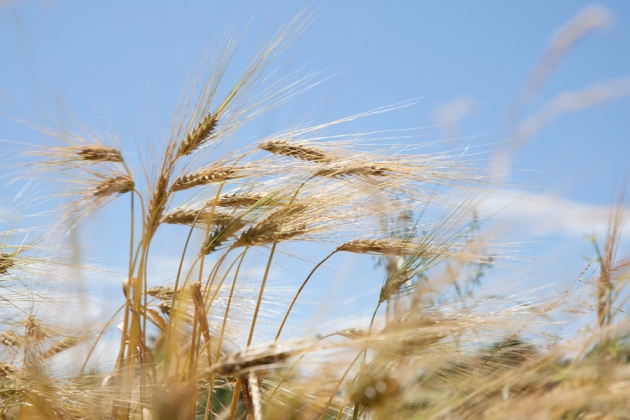 Ears of emmer wheat, a crop first farmed in the Fertile Crescent more than 10,000 years ago.

How farming fanned out

The latest study also finds traces of the diverse foundations of farming beyond Europe. Iranian farmers moved north into the Eurasian steppe and eastwards into present-day India and Pakistan. Southern Levant farmers made a trek to Africa, perhaps bringing new farming traditions to East Africa. The study notes that this is in line with previous work suggesting that humans from Eurasia launched a ‘back-to-Africa’ migration some 3,000 years ago.

Rogers says that the study offers a first glimpse of the spread of farming to Asia, “but we need an awful lot more work looking at how farming spread eastward,” he says.

“The study has the grandeur of providing a big picture of the advent of farming and how this shift from hunting and gathering to food production had a crucial impact on the evolutionary history of Europe, East Africa, India and Central Asia,” says Carles LaLueza-Fox, a palaeogeneticist at the Institute of Evolutionary Biology in Barcelona, Spain.

A second bioRxiv preprint, posted by some of the same team on 19 June2, reports the whole genome of one the Zagros farmers: a female who lived 10,000 years ago. (By contrast, the report from Reich and Lazaridis samples thousands of single-letter genetic variants peppered across the genomes of the 44 individuals). Differences between her genome and those of farmers in Turkey supports the broad conclusion that farming emerged independently in the region, the paper says.

LaLueza-Fox sees such research as an indication that scientists can reliably collect ancient DNA from hotter climates, where much of human prehistory played out. “Retrieving genomic data from the ancient Near East is a palaeogenomic dream come true,” he says.