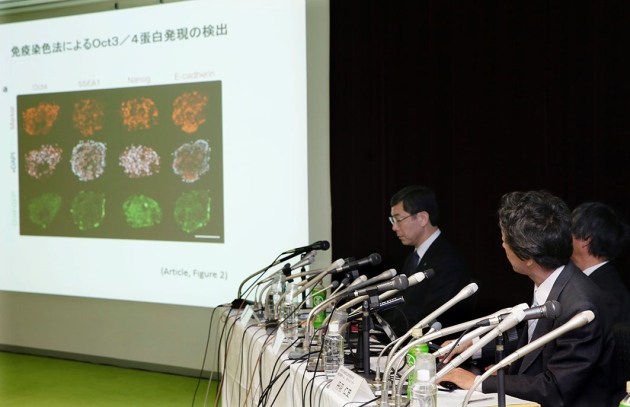 A RIKEN investigation team presented its results on the STEM controversy in Tokyo in December 2014.

A revolutionary way of making stem cells claimed last year by Japanese and US researchers never existed in the first place. That is the conclusion of two papers1, 2 published on 23 September in Nature — the same journal that published the original, ill-fated papers early last year.

In January 2014, a team led by researchers at the RIKEN Center for Developmental Biology (CDB) in Kobe, Japan, and Harvard Medical School in Boston, Massachusetts, published two papers3, 4 claiming that embryonic-like stem cells — which are pluripotent, or able to form any of the body’s more than 200 cell types — could be produced by exposing adult body cells to stress, such as acidic conditions or physical pressure. The authors named the technique stimulus-triggered acquisition of pluripotency, or STAP.

However, other scientists quickly found problems with data in the research — and, following an investigation, the papers were retracted.

But whether the procedure might have worked, and where the pluripotent stem cells labelled STAP in the RIKEN laboratory came from, were still unresolved matters.

A question of contamination

To help to resolve the first question, seven teams in four countries tried to replicate the procedure under various conditions1. The teams’ work amounted to 133 attempts to produce STAP cells, all of which failed.

One of the teams, led by researchers at Harvard Medical School, worked with one of the original STAP co-authors at the laboratory where the STAP research project began. In cells engineered to express a fluorescent protein when a gene related to pluripotency was expressed — supposed to be a sign of conversion to a 'STAP state' — they did find some fluorescence. But further testing showed this to be an artefact — a phenomenon in which cells can naturally emit light, known as autofluorescence1. The six other groups also observed autofluorescence and no evidence of STAP conversion.

Nature special: The rise and fall of STAP

A group of RIKEN researchers, which did not include any authors of the original STAP papers, analysed the genomes of purported STAP cell lines that remained at the CDB2. They found multiple instances of contradictory data, the result of what they call “contamination” of supposed STAP cells by other known cell types. The analyses show that all remaining purported STAP stem cell lines, for example, were genetically identical to embryonic stem cell lines that already existed in the laboratory.

Contamination also explains one of the most puzzling features of the original work: why the alleged STAP cells were found to be capable of forming placental tissue, when embryonic stem cells are not, according to a review paper also published on 23 September in Nature5. Even as people started to believe that the purported STAP cells were just embryonic cells, there was no explanation of why the researchers would see placenta forming. But the latest analyses show that a mixture of trophoblast stem cells — cells that form the placenta in a developing embryo — were mixed with embryonic stem cells and that the mixture had been used in the experiments producing the placenta.

It is an explanation that stem-cell scientist Rudolf Jaenisch of the Massachusetts of Technology in Cambridge, who was part of the replication efforts, suggested in April 2014 to Nature’s news team, although he did not have evidence at the time to support it.

One lingering question is how these embryonic stem cells and trophoblast stem cells came to replace purported STAP cells when the experiments were done. Cross-contamination — accidental contamination of one cell culture by another type of cell — is a well-known problem in biology. But multiple independent contamination events would be necessary to explain the mistakes in the STAP paper data.

“It is very difficult to reconcile the data with simple contamination or careless mislabelling,” says stem-cell scientist George Daley at Harvard Medical School. Requests for comments from corresponding authors of the original papers went unanswered.

The review paper5 hopes to find a positive lesson in the STAP saga. In the article, Daley, Jaenisch and others detail rigorous ‘forensic’ analysis that they say should be conducted on any purported new types of pluripotent stem cell. This should be done before publication, the article concludes. Daley says that the review is topical because, besides the failed STAP papers, “numerous groups are reporting ever more nuanced states of pluripotency”; the overview focuses on genomic analyses, enabled by advances in sequencing technology, that will help evaluate such cell types.

Daley says that this brings the STAP episode to a close — but with a note to scientists who are looking for ways to reprogram cells to an embryonic-like state: “We will all be a tad more cautious in evaluating such claims.”