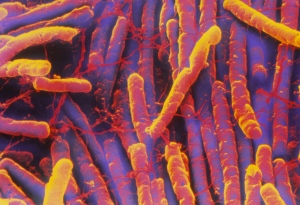 An infusion of faeces from a healthy person stops the recurrence of Clostridium difficile infections, which can cause severe diarrhoea.

Faecal transplants  —  in which faeces from one person is infused into another's intestines  —  have dramatically outperformed a conventional antibiotic at treating recurring infections of Clostridium difficile, a bacterium that causes severe diarrhoea.

This marks the first time that the unorthodox technique has proven its effectiveness in a randomized clinical trial, in which patients are randomly assigned to groups that are treated with different therapies. The transplants were so successful that the trial was stopped early. The results are published today in the New England Journal of Medicine1.

Faecal transplants are meant to restore the healthy complement of gut bacteria that would normally keep C. difficile at bay. Despite their unappealing nature, the transplants have been used to treat hundreds of patients, more than 90% of whom have recovered.

“Those of us who’ve been doing this procedure for some time didn’t need any more convincing, but the large medical community needs to go through these steps,” says Alexander Khoruts, a gastroenterologist at the University of Minnesota in Minneapolis, who was not involved in the trial. “It’s an unusual situation where we have more than 50 years of worldwide experience and more than 500 published cases, and only this far along does a randomized trial appear.”

Els van Nood, an internal medicine researcher at the University of Amsterdam and a co-author of the study, says that doctors and patients are sometimes reluctant to try the technique. “But we had so many recurrences that couldn’t be cured, and when we started faecal therapy, it worked amazingly,” she says. “We didn’t have trouble in convincing our ethical commission to start the trial.”

The researchers, led by Josbert Keller, a gastroenterologist at the University of Amsterdam, recruited 43 people whose C. difficile infections had relapsed after a failed round of antibiotic treatment. The volunteers were randomized to receive either an infusion of faeces — delivered to the small intestine via a tube threaded through the nose — or a standard two-week regimen of the antibiotic vancomycin. The faeces came from a pool of 15 healthy donors who were thoroughly screened for transmissible diseases.

The team had initially planned to recruit 120 patients in total, but the trial was stopped early because the difference between the groups was so dramatic. They found that faecal transplants were three to four times more likely to cure the infections than the antibiotic. The infusions cured 15 out of 16 patients (94%), whereas vancomycin did the same for just 7 out of 26 patients (27%). The rest relapsed, but were subsequently treated with faecal transplants and cured after one or two infusions.

The patients’ gut bacteria became more diverse after the faecal infusions, and they did not show any adverse side effects, except for some temporary diarrhoea and occasional constipation.

Christine Lee, a microbiologist at McMaster University in Hamilton, Ontario, praises the study but is concerned that delivering the infusions through the nose, rather than through usual enemas, “may not be readily accepted by patients and might be more difficult to implement.”

But van Nood says that the nasal route is easier and quicker if a patient’s colon is inflamed and that her volunteers did not mind. Although faecal transplants are inherently repulsive, the treatment is so successful that many of the patients in the trial complained if they were randomized to receive vancomycin.

“I think this is an excellent study and the first in what will be many controlled trials,” says Lawrence Brandt, a gastroenterologist at the Albert Einstein School of Medicine in New York. Brandt is leading a blinded trial in which patients are infused with either their own faeces or those from healthy donors.

Van Nood hopes that the success of the trial will improve acceptance of the technique among hospitals. “A lot of patients who have been dealing with C. difficile infections have the opportunity to be cured,” she says. “We get e-mails from everywhere, from desperate patients asking to come to the hospital to get this treatment. They can still find a lot of reluctance, and we hope that this will change.”