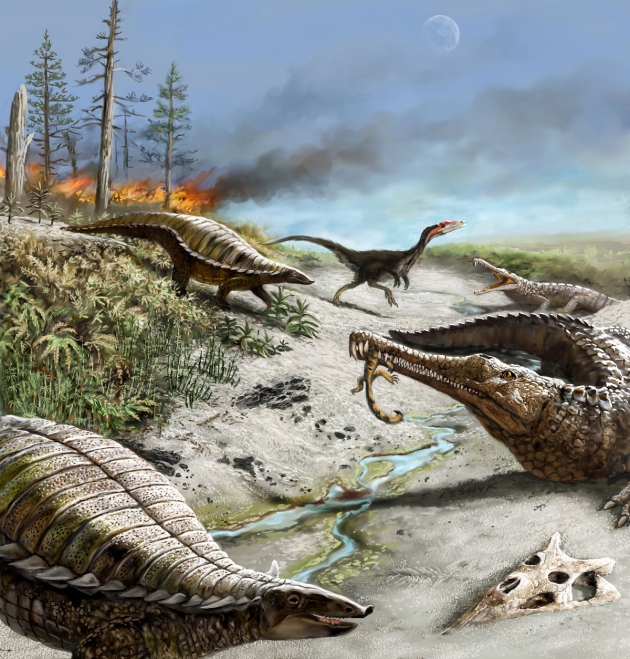 Reptiles dominated the southwest United States 212 million years ago, while dinosaurs were scarce.

Dinosaurs once dominated the world — but they spent their first 30 million years stranded on its geographic fringes. Large dinosaurs flourished near the poles, but only a few small ones, no larger than ostriches, managed to gain a foothold in the hotter low latitudes1.

The latest research2 suggests that an unstable climate in these regions kept big dinosaurs at bay for millions of years, as conditions at lower latitudes swung violently between wet and dry periods.

The finding is based on a detailed climate history reconstructed from sedimentary rock in New Mexico that dates from about 215–205 million years ago, during the late Triassic period. Back then, the area sat just north of the equator, roughly where Costa Rica is today. The region was dominated by archaic reptiles (some related to crocodiles), with only a few small dinosaur species present3.

Jessica Whiteside, an organic geochemist at the University of Southampton, UK, who led the study, tracked ancient plant growth by analysing carbon isotopes in nodules of petrified soil in the rock layers. She found repeated spikes and dips in the amount of ‘heavy’ carbon-13, a sign of major ecological disruption. These spikes lined up with sudden changes in fossil pollen trapped in the rocks, indicating periodic shifts between plant species adapted to wet conditions and those that preferred an arid environment.

The rock layers that mark the ancient dry periods also held chunks of fossilized charcoal — remnants of wildfires that swept through ancient conifer woodlands. Ian Glasspool, an organic petrologist at Colby College in Waterville, Maine, measured the reflectiveness of that charcoal to estimate the temperatures of the wildfires that produced it. One fire reached 680°C, warm enough to melt an aluminium can.

“That’s a pretty hot fire,” Glasspool says. “There was probably a lot of fuel there.” A drought that browned large swathes of vegetation could have provided the excess fuel that is necessary to generate that kind of heat, he adds.

There is other evidence to suggest that fires ravaged the area. Close to the site where Whiteside and colleagues collected rock samples, a fossil bed contains hundreds of reptile bones mixed with rocks and charcoal. Scientists think that the animals died in a fire, and their rotting carcasses were washed away by rainfall that stripped soil, rocks and wood off the landscape and buried them in a depression4.

This unstable environment could have prevented large dinosaurs from surviving in this region. “Big herbivorous dinosaurs required a lot more steady resources,” says Randall Irmis, a palaeontologist at the Natural History Museum of Utah in Salt Lake City and a co-author of the study. Such animals needed a constant supply of food as they grew from hatchlings to as large as 4,000 kilograms over 10–20 years.

By comparison, the much smaller reptiles that inhabited what is now the southwestern United States rarely topped 1,500 kilograms. They grew more slowly and needed less food. “In these hot, dry, fluctuating climates, things that are small have a better chance of surviving,” Irmis says.

Hans-Dieter Sues, a palaeontologist at the Smithsonian National Museum of Natural History in Washington DC, says that large dinosaurs still might have inhabited the lower latitudes elsewhere. “We have almost no lower-latitude record” for late-Triassic animals outside of the United States, he notes.

William Parker, a palaeontologist with the Petrified Forest National Park in Arizona, counters that Triassic bones have been collected for more than 100 years in an area stretching from Wyoming to the Texas panhandle. “That’s a huge area, spanning 25 million years, and no [large dinosaurs],” he says. “But you go to South America and Europe and South Africa, and you’re tripping over the things.”