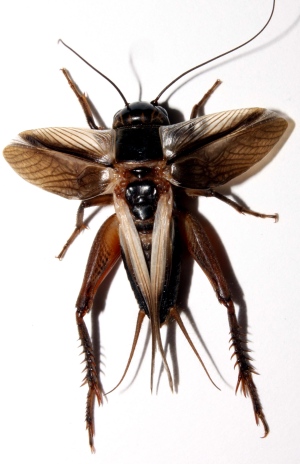 Populations of a male cricket on different Hawaiian islands have lost their ability to chirp as a result of separate, but simultaneous, evolutionary adaptations to their wings. The changes, which allow the insects to avoid attracting a parasitic fly, occurred independently over just 20 generations and are visible to the human eye, a study reveals.

The findings could help to shed light on the earliest stages of convergent evolution — when separate groups or populations independently evolve similar adaptations in response to natural selection.

Male field crickets (Teleogryllus oceanicus) are known for their chirping sound, which is produced by scraping their wings across one another. The wings’ veins form special structures that make the vibrations that we hear as the crickets’ song. “The mechanism is like rubbing your fingernail on the file of a comb,” says study leader and evolutionary biologist Nathan Bailey of the University of St Andrews, UK.

The nightly serenades lure in females and facilitate reproduction — but unfortunately for the males in Hawaii, the chirping also attracts a deadly parasitic fly, Ormia ochracea. The fly larvae burrow into the cricket and grow inside, killing the host when they emerge a week or so later.

Both species are likely to have arrived in Hawaii at the end of the last century — the cricket from Oceania, and the fly from North America. To protect themselves from their new enemy, large numbers of male crickets on the Hawaiian island of Kauai quickly stopped chirping.

The change seems to have been caused by a mutation that altered the shape of their wings, making them incapable of producing the chirping noise. The feat was achieved over less than 20 generations, a mere evolutionary blink of an eye, and, with the crickets living just a few weeks, a very rapid process. By 2003, a study by Marlene Zuk at the University of California Riverside found that up to 95% of male crickets on Kauai were no longer able to chirp1. The mutation had erased almost all the wing structures that help to make the sound, leaving the wings flattened but still airworthy.

Just two years later, in 2005, male crickets on the island of Oahu, 101 kilometres from Kauai also began to fall silent. Today, about half of the males on Oahu are chirpless, Bailey has found.

His team was intrigued by the existence of silent mutants in more than one population. The researchers suspected that the flatwings had simply migrated to Oahu from Kauai, probably by hitching a ride on boats or planes.

However, it turned out that while the Oahu crickets, too, had flat wings, they were very distinct from those of their Kauai neighbours. The difference is noticeable even to the naked eye, with the Oahu crickets losing many fewer chirping structures than those on Kauai.

In their study, published today in Current Biology2, Bailey and his team analysed the genomes of crickets from both islands using a technique that slices DNA into small fragments and then detects hundreds of thousands of genetic markers, or small distinct regions of the genome. The genetic markers associated with the flat wing are very different in the Kauai and Oahu populations. “It means that different mutated portions of the genome cause males to be flatwing in either population,” says Bailey.

Although evidence for convergent evolution can be seen throughout the natural world, it is difficult to catch it as it happens. The study shows that superficially similar convergent solutions to attacks by parasites attracted by sound “can evolve in radically different ways”, says Tom Tregenza, an evolutionary ecologist at University of Exeter, UK. “The genome can create similar results using very different sets of genes.”

Bailey's team is now working to pinpoint the genes involved and understand how they interact with the rest of the cricket genome.

Tregenza says that besides identifying the genes, another “exciting avenue for future research” will be to investigate how the loss of chirping affects the ability of females to choose their mates, and the consequences this has for the evolution of the population.