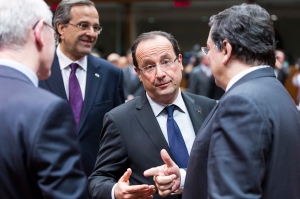 Herman Van Rompuy (centre), president of the European Council, led negotiations that are likely to mean the first ever cut to the European Union's budget.

The ambitious vision for Europe’s next research programme dimmed last week when heads of the 27 member states of the European Union (EU) agreed to slash the overall budget for 2014–20, at the end of a long and acrimonious meeting. The deal scales back the budget proposed by the European Commission in November 2011 for its Horizon 2020 research programme by about 13%, to €69.24 billion (US$108 billion), and means that the first year of the new programme will have a smaller budget than the last year of the previous one.

“The way it looks now, with all the arguments that were on the table in favour of promoting research in Europe, that decision is disappointing,” says Helga Nowotny, president of the European Research Council (ERC).

Europe’s leaders also reduced funding for specific scientific projects, including Galileo, Europe’s satellite-navigation system, but they urged poor regions and countries to use more of their EU subsidies to pay for science.

A spokesman for the commission points out that even the reduced budget for Horizon 2020 marks a significant rise in research funding compared with the €55 billion for research during 2007–13.

The highly regarded ERC had been counting on a larger increase. Founded in 2007, it awards large grants on the basis of research excellence, and had hoped for a €13-billion slice of Horizon 2020 to help boost the current 12% success rate of proposals. The council did not detail how the cuts should be distributed among Horizon 2020’s research programmes.

The European Parliament has yet to endorse the council’s decision; politicians there will cast their votes some time in the next three months. Parliament had called for a mighty €100-billion budget for Horizon 2020 (see Nature 489, 188–189; 2012).

Some prominent parliamentarians, including Christian Ehler, rapporteur for Horizon 2020, have vowed to fight for more. But observers say that behind-the-scenes negotiations between the commission, council and parliament over the past months suggest that the parliament is unlikely to get its own way.

The council’s proposal that more EU cohesion funds — historically used to promote the competitiveness of poor regions by improving infrastructure such as transport links — be used for research has precedent. Last year, Greece awarded €3.7 million in cohesion funds to molecular biologist George Kollias from the Biomedical Sciences Research Centre ‘Alexander Fleming’ near Athens. He will use them to equip and operate a Greek node of the Infrafrontier project, which aims to systematically phenotype, or characterize, mutant mice. “It’ll give all Greek scientists easier access to high-tech genetic tools,” he says.

The council specified exact budgets for three large scientific infrastructure programmes outside Horizon 2020. Its recommendations cut the commission’s budget for Galileo by 10% and for GMES, a system of Earth-observation satellites, by roughly one-third. The council did, however, allocate €2.7 billion to the experimental nuclear fusion reactor ITER, which the commission had proposed not funding.

“But discussions are not yet over,” cautions Nowotny. “We all have to wait to see the final figures and agreement.”