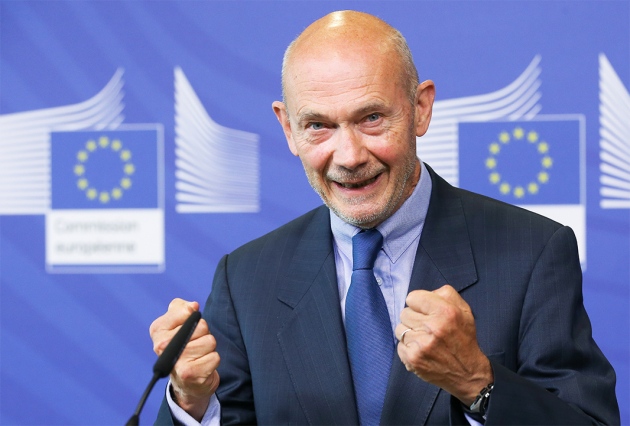 So researchers are delighted with an influential 3 July report that urges the EU to double the budget of its next funding scheme, called Framework Programme Nine (FP9), which is due to launch in 2021. The report says that FP9’s structure should be largely similar to that of H2020, but with less bureaucracy, and suggests that it includes a few major ‘moonshot’ missions in areas such as energy and information technology.

“Scientists are generally happy with the report because it mostly confirms our thinking,” says Stephan Kuster, the acting director of Science Europe, a Brussels-based organization that represents member-state research agencies. But it lacks details on some of its aims, he says: in particular, how to persuade politicians to approve such a large budget hike.

The report comes from a group of academic and industry experts invited by the European Commission to formulate a vision for future research plans, headed by a former director-general of the World Trade Organization, Pascal Lamy. Commission insiders say its ideas will strongly influence the shape of FP9 — set to be the first major EU funding programme to take place after the United Kingdom leaves the union in 2019.

Uncertainty over Brexit negotiations means that the commission isn’t close to determining its total post-2020 budget, and it will not propose what FP9 might look like until the end of this year. That has not stopped advocates asking for more cash: in June, a research committee for the European Parliament proposed a €120-billion budget for FP9, assuming that, like H2020, it will run for 7 years.

In an interview with the European Commission alongside his report, Lamy calls that “a bare minimum”. His team’s report says that whatever the result of Brexit negotiations, “full and continued engagement” with the United Kingdom in FP9 would be “an obvious win-win for the UK and the EU”. The programme should also be opened up more widely to non-EU countries, the report says.

European scientists have a love–hate relationship with the EU’s massive research programmes. Researchers appreciate the funding and the support of collaborative projects, but deplore the bureaucracy and the way each new programme changes the rules. An interim evaluation of H2020, published in May, suggests it has been more popular than its predecessors, in part because of cuts to red tape.

Still, the evaluation noted that H2020 is heavily oversubscribed, with barely 1 in 9 applications  funded — well down on its predecessor programme, which funded nearly 1 in 5. FP9 should return to earlier levels, the Lamy report says.

Success rates are even lower, below 1 in 10, at the prestigious European Research Council (ERC), which as part of H2020 was given a €13.1-billion budget to fund basic research for 2014–20. The ERC is supposed to reward excellence, but in some of its grant programmes, half of the projects deemed “excellent” by reviewers have gone unfunded. “We would need to double our budget to make sense of our mission,” says ERC president Jean-Pierre Bourguignon.

The Lamy report recommends keeping H2020’s broad divisions into grants for excellent science, for industrial-innovation projects, and for multinational collaborations that meet societal grand challenges. It suggests that rules of participation be made simpler — with documentation and reporting obligations kept to a minimum, and audits restricted to cases where fraud is suspected. And it proposes that FP9 adopt broader measures of the ‘impact’ of work — going beyond scientific impact to capture effects on policymaking and industrial competitiveness, for instance.

The EU has an ‘innovation gap’ compared with its trading partners, the report says, noting that the region trails South Korea on business-research spending, and has one-fifth of the number of fast-growing start-up firms that the United States does.

The report also argues that FP9 should do more to involve Europe’s citizens, including involving them in choosing ‘moonshot’ missions in areas of societal importance, such as climate change, that set targets to be achieved within precise time frames. (As an example, it suggests producing carbon-free steel by 2030.)

In general, scientists should get better at communicating their work using stories that citizens can understand, the report says: “Communicating on science should become part of researchers’ career and their reward system.”