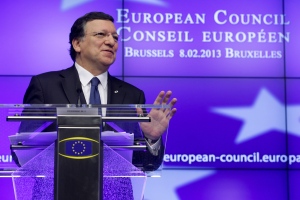 It is bad news for the massive research programme of the European Union (EU). In an acrimonious meeting of the European Council to decide the EU’s general budget for 2014–20, leaders of the union’s 27 member states slashed the €80 billion (US$108 billion) that the European Commission proposed for research in  in November 2011 back to €69.24 billion.

This is unlikely to be the last word on the fate of the seven-year research programme, known as Horizon 2020. The EU operates a complex decision-making system, and budgets must be agreed on by the council, the commission and the European Parliament. The parliament tends to be friendlier to research policies than the council — which gathers heads of government and tends to promote national interests. The parliament had earlier called for a mighty €100-billion budget for Horizon 2020.

But observers say that behind-the-scenes negotiations between the three bodies over the past months leave little room to hope that the parliament will be able to rescue the budget.

Horizon 2020 comprises a variety of research programmes, including the highly regarded — and highly competitive — European Research Council, which awards large grants to individual researchers exclusively on the basis of excellence. The commission is not commenting on how it might apportion the cuts among the programmes when the final budget is decided.

The council did, however, set aside exact budgets for three large scientific infrastructure programmes outside Horizon 2020. It approved €6.3 billion for Galileo, Europe’s navigation satellite system, down just 10% from the commission’s proposal. And it allocated €2.7 billion to the experimental nuclear-fusion reactor ITER, which the commission had originally proposed not funding. But it approved only €3.8 billion for the Global Monitoring for Environment and Security system of Earth-observation satellites, for which the commission had requested €5.84 billion.