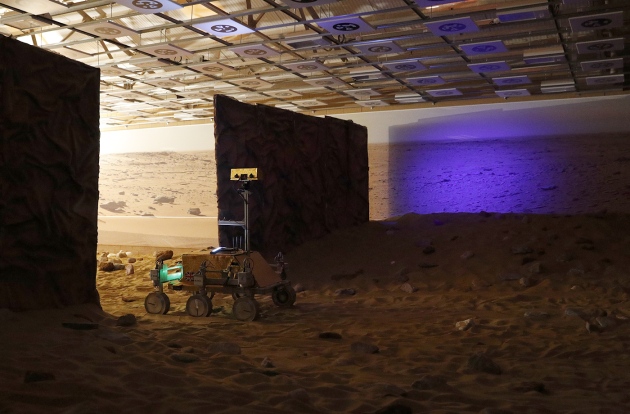 A prototype of the ExoMars rover explores a simulated Mars environment.

The European Space Agency (ESA) has secured the €436 million ($464 million) that it needs to land its first rover on Mars — despite rising costs and the failure of its Mars lander, Schiaparelli, in October.

“After the many challenging, difficult and rewarding moments of 2016, this is a great relief and a fine result for European space exploration,” says Don McCoy, ESA’s project manager for the overall mission that includes the rover, called ExoMars.

ExoMars 2020, a joint Mars rover mission with the Russian space agency Roscosmos that will launch in 2020, had already been delayed from a planned launch in 2018 — a major cause of the cost increase — and its future looked on shakier ground following the failure of Schiaparelli, which was designed to test Europe’s ability to land a craft on the red planet, as part of the ExoMars project.

At a meeting of European government ministers in Lucerne, Switzerland, on 1–2 December, ESA member states agreed to provide an extra €339 million for ExoMars 2020, on top of the more than €1 billion already committed to the ExoMars programme. ESA also announced that it will find a further €97 million by moving funds internally. Speaking at a press briefing after the meeting, ESA director-general Jan Wörner said that this would be done “without detriment” to ESA’s wider science budget.

But not all projects were so fortunate. Member states did not commit the €250 million needed to fund a plan for ESA to participate in a mission to deflect the moon of an asteroid, although they left the door open to future, similar projects.

The meeting was a crunch point for the ExoMars mission. ESA officials had hinted that if member states did not commit to coughing up the extra funding, there was little point in proceeding at all.

ESA hopes to learn lessons from the Schiaparelli crash. Last week, the agency confirmed that the crash was caused by errors in the sensor systems, which made the craft behave as if it was closer to the Martian surface than in actuality. This prompted Schiaparelli to jettison its parachute too early, before falling from a height of about 3.7 kilometres.

“We will have learned much from Schiaparelli that will directly contribute to the second ExoMars mission,” said David Parker, ESA’s director of human spaceflight and robotic exploration who is based at the European Space Research and Technology Centre in Noordwijk, the Netherlands, in a statement.

If successful, the rover will be the first one that either Europe or Russia has operated on Mars’s surface. Its major selling point is a 2-metre drill which would allow the robot to dig to a depth where signs of ancient life could have been preserved, protected from the red planet’s harsh radiation.

But it’s lights out for the Asteroid Impact Mission (AIM), which was designed to test a strategy for protecting Earth from incoming asteroids by subtly changing their course using projectiles. Insiders say that the mission missed its target sum by perhaps a few tens of millions of euros.

“A cool project has been killed because of a lack of vision — even short term — and courage, and this is really sad,” says Patrick Michel, a planetary scientist at the French National Centre for Scientific Research in Nice, who leads the AIM project.

Wörner suggested that a similar, smaller asteroid mission could still go ahead. And ministers supported making a smaller amount of funding available to explore ways of taking planetary-protection projects forward, he said. But the original project will not continue.

AIM would have sent a probe, two miniature satellites known as cubesats and a lander to the asteroid Didymos. There the scientists planned to watch a NASA craft, known as the Double Asteroid Redirection Test (DART), smash into a 165-metre wide rock that orbits the asteroid, known as Didymoon.

Scientists had hoped to study how the impact would alter the moon’s orbit. In 2022 Didymos will be close enough to Earth to monitor the deflection from the ground, meaning that DART — which is awaiting its own approval decision in March 2017 — can go ahead without AIM.

But the ESA craft would have provided more-detailed knowledge, says Michel. “This knowledge is crucial to be able to use our impact models with higher confidence for a real deflection mission."

AIM also included a plan to study the asteroid system and land a probe on its moon. Its cancellation means that ESA now has no small-body missions planned for at least the next 15 years, a particularly bitter disappointment following the success of ESA’s Rosetta mission, which orbited and landed on a comet.

“We have now a lot of expertise, thanks to Rosetta, that we need to teach to new generations, and this expertise will be lost,” adds Michel. The mission would also have been ESA’s first test of laser communication in deep space, and of its interplanetary cubesats.

Overall, ESA was able to obtain €10.3 billion of the roughly €11-billion sum it had requested from its 22 member states, plus Slovenia and Canada, for a variety of programmes, ranging from satellite communications to Earth observations. The sum includes commitments to continue to fund the International Space Station up to 2024, and to fund a future space-weather mission in cooperation with NASA and the Japanese space agency, JAXA.

Ministers also agreed to further finance plans for ESA to work with Roscosmos on a moon craft, the Russian lander Luna 27, a collaboration first pitched in 2014. ESA will spend around €30 million on preparatory work for the mission, which is scheduled for 2020. European scientists and industry hope to contribute landing, communications and drilling and analysis instruments to the craft, which is designed to study soil and the atmosphere at the Moon’s south pole.

The collaboration also lays the foundation for ESA to work with Russia on its planned follow-up mission to bring back the first samples from the Moon’s south pole, says Ian Crawford, a planetary scientist at Birkbeck, University of London. Roscosmos is planning that sample-return mission for the early 2020s.