Nearly all organisms share a single genetic language: DNA. But scientists have now demonstrated that several lab-made variants of DNA can store and transmit information much like the genuine article.

Researchers led by Philipp Holliger, a synthetic biologist at the Medical Research Council Laboratory of Molecular Biology in Cambridge, UK, say that the alternative molecules could help others to develop new drugs and nanotechnologies. They publish their results today in Science1. 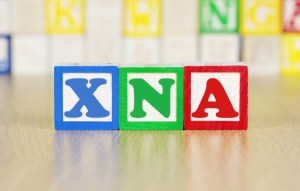 Synthetic XNA, with a different sugar backbone to natural DNA, can mimic many of the properties of the real thing.

DNA is made up of nucleic acid bases — labelled A, C, G and T — on a backbone made of phosphates and the sugar deoxyribose. The artificial polymers, dubbed XNAs, carry the normal genetic 'alphabet' on a backbone made using different sugars. Scientists have previously developed XNAs that recognize and bind genetic sequences for experimental and biomedical applications, but it is difficult to make them in large quantities.

“Any time you want another XNA molecule, you’ve got to make more, but you can’t copy what you already made — until now,” says Gerald Joyce, a biochemist at the Scripps Research Institute in La Jolla, California.

Holliger and his team engineered enzymes that helped six types of XNA to assemble and replicate genetic messages. The enzymes transcribed DNA into the various XNAs, then back into new DNA strands — with 95% accuracy or more.

“This is a huge step,” says Eric Kool, a chemist at Stanford University in California. “I would have predicted this method would work to some extent. I just didn’t know how well.”

Faithful genetic transmission over successive DNA-to-XNA cycles allowed researchers to select for only those XNAs that attached to certain target proteins from a pool of random samples — a process akin to evolution over multiple generations.

“For the first time, this confirms that replication, heredity and evolution are possible in these alternative backbones,” says Holliger.

Other researchers, including Steven Benner, a biochemist at the Foundation for Applied Molecular Evolution in Gainesville, Florida, and his colleagues, have replicated polymers with extra artificial genetic ‘letters’ on a normal DNA backbone2. Such synthetic alphabets could combine powerfully with modified sugar backbones that are hardier than DNA or RNA and can resist chemical degradation, says Holliger.

Biotechnologists might find tools in replicable, evolvable XNAs — certain artificial genetic polymers, for example, can bind and inhibit proteins, including ones involved in macular degeneration. But other scientists view such polymers as candidates for Earth’s earliest genetic molecules. DNA and its natural partner, RNA, are built on sugars that are relatively complex to produce, and many researchers believe that a simpler molecule came first.

In 2000, Albert Eschenmoser, a retired chemist at the Swiss Federal Institute of Technology in Zurich, and his colleagues reported that they had developed TNA3 — an XNA with a backbone based on α-l-threofuranosyl nucleic acid, and one of the six polymers used in the latest study. They showed that TNA can match up with DNA and even twist into DNA’s characteristic double-helix spiral. Some researchers consider TNA an attractive candidate for the earliest genetic molecule.

Ramanarayanan Krishnamurthy, a synthetic organic chemist at the Scripps Institute and a co-author of the TNA study, notes that the enzymes developed by Holliger’s group advance the field “by leaps and bounds”. The new enzymes show that DNA is capable of trading information very efficiently with TNA and many polymers apart from its usual partner, RNA.

“This study just breaks down the mental barrier,” says Krishnamurthy.

Both Krishnamurthy and Joyce note that although researchers can now efficiently replicate artificial genes resistant to biodegradation, the XNAs still depend on DNA-derived enzymes to replicate. “It’s miles and miles from being a synthetic life form,” says Joyce.