A pair of diamond crystals has been linked by quantum entanglement. This means that a vibration in the crystals could not be meaningfully assigned to one or other of them: both crystals were simultaneously vibrating and not vibrating.

Quantum entanglement — interdependence of quantum states between particles not in physical contact — has been well established between quantum particles such as atoms at ultra-cold temperatures. But like most quantum effects, it doesn't tend to survive either at room temperature or in objects large enough to see with the naked eye. 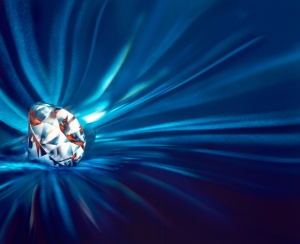 Diamonds have been linked with quantum entaglement — 'spooky action at a distance'.

A team led by Ian Walmsley, a physicist at the University of Oxford, UK, found a way to overcome both those limitations, demonstrating that the weird consequences of quantum theory apply at large scales as well as at very small ones. The work is published today in Science1.

The result is "clever and convincing", says Andrew Cleland, a specialist in the quantum behaviour of nanometre-scale objects at the University of California, Santa Barbara.

Entanglement occurs when two quantum particles interact with each other so that their quantum states become interdependent. If the first particle is in state A, say, then the other must be in state B, and vice versa.

Until a measurement is made of one of the particles, its state is undetermined: it can be regarded as being in both states A and B simultaneously, known as a superposition. The act of measuring 'collapses' this superposition into just one of the possible states.

But if the particles are entangled, then this measurement also determines the state of the other particle — even if they have become separated by a vast distance. The effect of the measurement is transmitted instantaneously to the other particle, through what Albert Einstein sceptically called 'spooky action at a distance'.

Weird as it is, quantum entanglement is real — and could be useful. In a technique called quantum cryptography, entangled photons of light have been used to transmit information in such a way that any interception is detectable.

And entangled quantum states of atoms or photons can be used in quantum computing. The superposed states encode much more information than is possible with conventional two-state bits.

But superpositions and entanglement are usually seen as delicate states, easily disrupted by random atomic jostling in a warm environment. This scrambling also tends to happen very quickly if the quantum states contain many interacting particles – in other words, for larger objects.

Walmsley and colleagues got round this by entangling synchronized atomic vibrations called phonons in diamond. Phonons are wavelike motions of many atoms in a lattice, rather like sound waves in air, and they occur in all solids. But in diamond, the stiffness of the lattice means that the phonons have very high frequencies and energy, and are therefore not usually active even at room temperature.

There are three crucial conditions that must be met to get entangled phonons in the two diamond crystals. First, a phonon must be excited with just one photon from the laser's stream of photons. Second, this photon must be sent through a 'beam splitter' that directs it into one crystal or the other. If the path isn't detected, then the photon can be considered to go both ways at once: to be in a superposition of trajectories. The resulting phonon is then in an entangled superposition too.

The third condition is that the photon must also convert part of its energy into a lower-energy photon, called a Stokes photon, which signals the presence of the phonon.

"When we detect the Stokes photon we know we have created a phonon, but we can't know even in principle in which diamond it now resides," says Walmsley. "This is the entangled state, for which neither the statement 'this diamond is vibrating' nor 'this diamond is not vibrating' is true."

To verify that the state has been made, the researchers fire a second laser pulse into the two crystals to 'read out' the phonon, from which the laser photon draws extra energy. All the necessary conditions are satisfied only very rarely during the experiment. "They have to perform an astronomical number of attempts to get a very finite number of desired outcomes," says Cleland.

He doubts that there will be any immediate applications for the technique, partly because the entanglement is very short-lived. "I am not sure where this particular work will go from here," says Cleland. "I can't think of a particular use for entanglement that lasts for only a few picoseconds" (10-12 seconds).

But Walmsley is more optimistic. "Diamond could form the basis of a powerful technology for practical quantum information processing," he says. "The optical properties of diamond make it ideal for producing tiny optical circuits on chips."