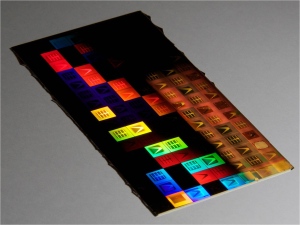 Advances in light trapping mean that thin-film solar cells could be adapted to absorb more light.

Thin-film solar cells are plagued by diminishing returns: thinner panels are cheaper to make, but as the semiconductor layer gets thinner it loses its light-trapping ability. Researchers at the California Institute of Technology in Pasadena now report the secret to making thin layers more absorbent — making it possible to use layers up to 100 times thinner than those in the commercial devices available today.

A theoretical light-trapping limit, called the ray-optic limit, sets out the maximum amount of light that a material can trap, but reaching that pinnacle requires the material to be thick1. Researchers have made thin-film solar cells with absorbing layers just tens of nanometers thick, but such a fine film can allow much of the light to pass through before it has a chance to be absorbed.

However, Harry Atwater and his colleagues argue in Nano Letters that cleverly made thin layers could help solar cells to overcome the ray-optic limit2. When the layers have thicknesses below the wavelength of visible light — 400–700 nanometres — they interact with its wave properties rather than treating it as a straight ray. “In this regime, where the structures we make are at or below the scale of the wavelength of light, suddenly all the rules change,” says Atwater. In this case, rather than depending on thickness, a material’s ability to absorb light depends on the wave interactions between the light and the absorber.

Through calculations and computer simulations, Atwater’s team demonstrated that the trick to upping a material’s thirst for light is to create more ‘optical states’ for the light to occupy — which are like slots that can accept light with a certain wavelength, similar to the energy levels of electrons in atoms. The number of optical states in a material depends, in part, on its refractive index, which determines how much the material shortens the wavelength of light passing through it. The higher the refractive index, the more compressed the light, and the more optical states the material can support.

In 2010, Shanhui Fan of Stanford University in California and his colleagues identified the number of optical states as a major factor in how much light a material could absorb3. They studied a material with a low refractive index bordered by a layer with a high refractive index. Near the interface, they found that the presence of the higher-index material effectively raised the refractive index of the low-index material, allowing it to absorb more light.

Atwater’s team has generalized this idea to show that cramming in more optical states can make many thin-film light absorbers take up more light than usual. The study also demonstrates that this can be accomplished in many ways — by coating the absorbing layer with metal or with a crystal structure that contains patterns on the scale of the wavelength of light, by embedding the absorber in a more complex three-dimensional array. Through different mechanisms, each of these strategies raises the effective refractive index of the absorber.

“Their work provides a comprehensive study of a variety of different designs that can potentially go beyond the ray-optic limit,” says Fan.

Robert Collins of the University of Toledo, Ohio, who works with the thin-film photovoltaic start-up company Xunlight, says the team’s concept is a “fundamental first step”. But he anticipates technological challenges ahead, such as a requirement for extra processing steps to create and control films on a sub-micrometre scale in an industrial setting, the added cost of which must be balanced by the savings in materials.