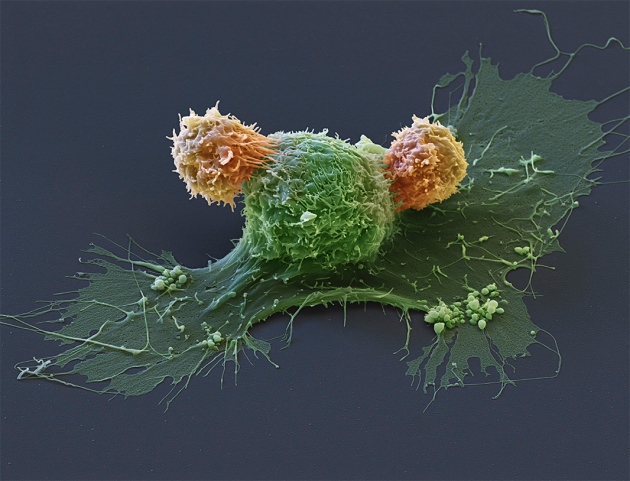 The benefits of cells used as CAR-T therapies (orange) make them attractive options for certain people with cancer.

External advisers to the US Food and Drug Administration (FDA) have thrown their support behind a therapy that genetically engineers a patient’s own immune cells to target and destroy cancers.

In a unanimous vote on 12 July, the panel determined that the benefits of CAR-T therapy outweigh its risks. The vote comes as the agency considers whether to issue its first approval of a CAR-T therapy, for a drug called tisagenlecleucel, manufactured by Novartis of Basel, Switzerland.

The FDA is not obligated to follow the recommendations of its advisers, but it often does.

Novartis is seeking approval to use tisagenlecleucel to treat children and young adults who have a form of leukaemia called acute B-cell lymphoblastic leukaemia, and who have not responded sufficiently to previous treatment or have relapsed since that treatment. In the United States, about 15% of children and young adults with acute lymphoblastic leukaemia relapse.

Studies have shown that CAR-T therapies can produce lasting remissions in such cases. In one key trial of tisagenlecleucel, which started in 2015, 52 out of 63 participants — 82.5% — experienced overall remissions. The unpublished trial had no control group, so investigators cannot yet say with certainty how much effect the treatment had. But many participants of such trials have remained cancer-free for months or years.

Many of the FDA’s advisers were effusive in their praise. “This is a major advance, and is ushering in a new era,” said panel member Malcolm Smith, a paediatric oncologist at the US National Institutes of Health in Bethesda, Maryland. Timothy Cripe, an oncologist at Nationwide Children’s Hospital in Columbus, Ohio, called it one of the most exciting things he has seen in his lifetime.

But the therapy poses serious risks. During the 2015 tisagenlecleucel trial, 47% of participants experienced an extreme inflammatory reaction known as cytokine release syndrome, severe cases of which are called cytokine storms. The syndrome — characterized by symptoms such as high fevers and organ failure — can be life-threatening. But Novartis says trial clinicians were able to manage the reaction successfully in all cases.

Neurological problems such as seizures and hallucinations were also relatively common but temporary, the Novartis team reported. This is in stark contrast to some other CAR-T trials that have, over the past year, reported the deaths of several participants from severe brain swelling. Novartis’s therapy is not identical to the CAR-T cells used in those trials, which were administered in adults, but the deaths cast a pall over the entire field.

CAR-T therapies also present a gnarly regulatory challenge for the FDA: how do you assure the potency and purity of a complex, living drug that must be made fresh for each patient?

FDA advisers spent half of the 12 July meeting learning about how Novartis has attempted to standardize, as much as possible, a treatment based on cells taken from individual people. To generate a batch of tisagenlecleucel, white blood cells are purified from a sample of a patient’s blood and shipped to a central processing centre. There, staff use a virus to insert into the T cells genes that encode a cellular receptor — called a chimaeric antigen receptor — that will recognize leukaemia cells.

The cells are grown in culture before they are reintroduced into the patient. It takes Novartis about 22 days to manufacture each person’s treatment.

Several committee members expressed concern about the uncertainties that still swirl around the therapy. These include the risk that the virus used to engineer the cells could acquire the ability to replicate, or that improper insertion of the foreign gene could turn the T cells cancerous. The panel also noted the uncertain effects of engineering and reintroducing a mix of different kinds of T cells and other immune cells.

CAR-T therapy is high-risk, and little is known about any long-term toxicity effects. But the young patients who would receive it have few alternatives, and those alternatives carry risks of their own, said Bruce Roth, an oncologist at Washington University School of Medicine in St. Louis, Missouri, and chair of the FDA advisory panel. “Although I have some concerns about late toxicity, you have to be a long-term survivor to be concerned about late toxicity”, he said. “And I think that’s what this drug gets us.”