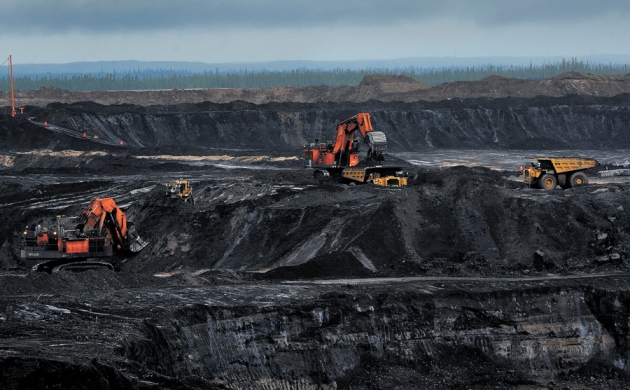 Oil extracted from fields in Alberta, Canada, would travel through the proposed Keystone XL pipeline.

The debate over the development of oil sands in Alberta, Canada, is inflaming tensions in and between Canada and the United States.

In April, US President Barack Obama deferred a decision on the fate of the proposed Keystone XL oil pipeline, despite escalating pressure to approve it from Canadian Prime Minister Stephen Harper. The contentious pipeline would transport 830,000 barrels per day of partially refined bitumen from Alberta’s oil sands, through the US Midwest, to Gulf Coast refineries. Harper is also facing a controversial domestic battle over his approval on 17 June of the Enbridge Northern Gateway pipeline, to connect Alberta with a port on British Columbia’s remote Pacific coast.

But drama over the pipelines obscures a larger problem — a broken policy process. Both Canada and the United States treat oil-sands production, transportation, climate and environmental policies as separate issues, assessing each new proposal in isolation. A more coherent approach, one that evaluates all oil-sands projects in the context of broader, integrated energy and climate strategies, is sorely needed.

Although Keystone XL and Northern Gateway are among the first major North American projects to highlight flaws in oil-sands policies, more than a dozen other projects are on the drawing board. Meanwhile, the US government is considering its first oil-sands leases on federal lands, as bitumen mining expands on state land in Utah’s Uinta Basin.

As scientists spanning diverse disciplines, we urge North American leaders to take a step back: no new oil-sands projects should move forward unless developments are consistent with national and international commitments to reducing carbon pollution. Anything less demonstrates flawed policies and failed leadership. With such high stakes, our nations and the world cannot afford a series of ad hoc, fragmented decisions.

Current public debate about oil-sands development focuses on individual pipeline decisions. Each is presented as an ultimatum — a binary choice between project approval and lost economic opportunity. This approach artificially restricts discussions to only a fraction of the consequences of oil development, such as short-term economic gains and job creation, and local impacts on human health and the environment. Lost is a broader conversation about national and international energy and economic strategies, and their trade-offs with environmental justice and conservation. 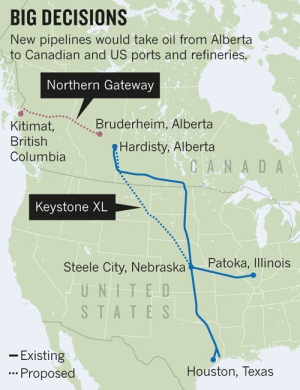 This pattern of incremental decisions creates the misguided idea that oil-sands expansion is inevitable. By restricting the range of choices, governments have allowed corporations to profit from one-off policy decisions, leading to a doubling of oil-sands production in Alberta in the past decade, with production forecast to double again to 3.9 million barrels per day in the coming decade1. The collective result of these decisions is unnecessarily high social, economic and environmental costs.

When judged in isolation, the costs, benefits and consequences of a particular oil-sands proposal may be deemed acceptable. But impacts mount with multiple projects. The cumulative effects of new mines, refineries, ports, pipelines, railways and a fleet of transoceanic supertankers are often at odds with provincial, state, federal or international laws protecting clean water, indigenous rights, biodiversity and commitments to control carbon emissions.

Oil-sands development in Alberta, for example, has irreversibly transformed more than 280 square kilometres of the boreal landscape by burning or degrading peatlands covering oil-sands deposits2. Such ecosystems represent long-term carbon sinks that require thousands of years to develop. The development has also elevated waterway concentrations of chemical contaminants such as polycyclic aromatic compounds that are toxic to fish and other aquatic organisms3, 4, and has been associated with a tenuous but troubling rise in rare cancers in downstream indigenous communities5.

Oil-sands production has already caused dramatic increases in carbon pollution. The United States and Canada have committed to the same 2020 greenhouse-gas emissions target: a 17% decrease relative to 2005 levels. But Canada’s agencies predict that it will miss its target by 122 million tonnes annually6, 7. Although emissions in many sectors are falling, those from oil-sands production are predicted to triple from 2005 by 2020, from 34 million to 101 million tonnes.

Despite these predictions, public discussions around emissions from expanding oil-sands production are being muted. Since 2010, public hearings on proposed pipelines, including Northern Gateway, the Trans Mountain pipeline in British Columbia, and the Line 9B pipeline reversal in southern Ontario, have formally excluded testimony by experts or the public about carbon emissions and climate (see go.nature.com/mpx2sc).

We propose two steps to improve decisions about the development of oil sands. First, North American citizens and policy-makers must enact policies at national, state and provincial levels that acknowledge the global consequences of expanding oil-sands develop­ment. Legislated constraints on carbon pollution (such as a carbon tax or cap-and-trade) based on current climate science will help to ensure that the full social costs of carbon combustion are incorporated into investment decisions about energy and infrastructure. This will help companies and policy-makers to better judge trade-offs between investment in oil-sands projects, renewables and energy-conservation programmes, while catalysing innovation in low-carbon technologies.

Second, policy-makers need to adopt more transparent and comprehensive decision-making processes that incorporate trade-offs among conflicting objectives such as energy and economic development, environmental protection, human health and social justice. The decision sciences offer pathways, from problem identification to policy implementation, which can encompass a wide range of public values and address multiple drivers, linked effects and nested scales of cause and effect.

Decision-support tools are being developed for exploring how outcomes, priorities and trade-offs shift under different future energy scenarios. Possibilities might include the approval or rejection of pipeline proposals, more stringent low-carbon fuel standards, carbon taxes, or a spike or drop in global demand for Canadian oil8. Such tools can be used to identify thresholds where development should shift from one energy option to another, and evaluate which investments are most robust given environmental, social and economic policies and their effects on energy supply and demand8. The territorial government in the Canadian north is using these tools to identify energy options that protect the Arctic environment and developing economy, while meeting the needs of local communities9.

In the absence of a global accord to reduce carbon emissions, the United States and Canada should agree to a suite of shared policies to guide development of both carbon-based and low-emission sources of energy over the coming decades. Such coordination might seem unlikely given the ideological gulf between the current US and Canadian administrations, but that divide will not persist indefinitely.

A binational carbon and energy strategy should align with existing continental trade accords, provide a clear road map for decisions about energy development — particularly for unconventional oil — and enhance North American competitiveness and leadership. It should specify priorities, expectations and principles whereby decisions on infrastructure projects, such as Keystone XL or Northern Gateway, are made in the context of an overarching commitment to limit carbon emissions. North America’s energy challenges would then become a vehicle for beneficial economic coordination and integration rather than remaining a source of rancour and friction.

A key step is a moratorium on new oil-sands development and transportation projects until better policies and processes are in place. Reform is needed now: decisions made in North America will reverberate internationally, as plans for the development of similar unconventional reserves are considered worldwide.

With clearer policy, smarter decisions and stronger leadership, Canada and the United States can avoid the tyranny of incremental decisions — and the lasting economic and environmental damage that poorly conceived choices will cause.