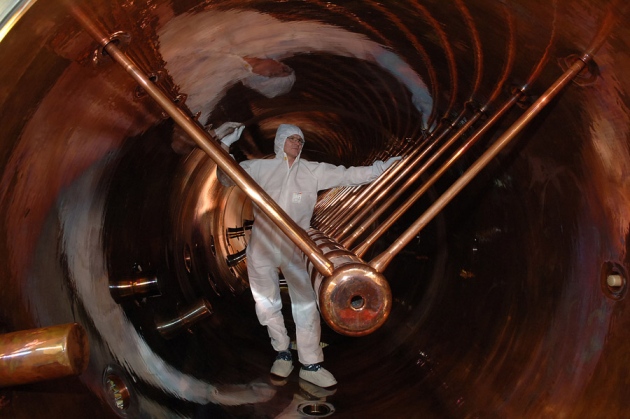 The linear accelerator at the GSI laboratory in Germany pushed calcium ions to 10% of the speed of light to create element 117.

Physicists have created one of the heaviest elements yet, an atom with 117 protons in its nucleus. This jumbo-sized atom sits on the outer reaches of the periodic table where bloated nuclei tend to become less and less stable. Element 117’s existence gives scientists hope, however, that they are getting closer to discovering a rumored 'island of stability' where nuclei with so-called magic numbers of protons and neutrons become long-lived.

Elements heavier than uranium (with 92 protons) are not usually found in nature, but they can be forced into existence in laboratories. The trouble is: the larger an atomic nucleus gets, the more its protons repel one another with their positive charges, making it, in general, less stable, or more radioactive. Element 117, for example, has a half-life of about 50 thousandths of a second, meaning that within that time about half of it will decay into a lighter element.

A US–Russian team first created element 117 in 20101 at the Joint Institute for Nuclear Research in Dubna, Russia. The element is still considered unofficial, and has not yet been formally accepted and added to the periodic table by the International Union of Pure and Applied Chemistry (IUPAC). The new appearance of 117, in experiments by the GSI Helmholtz Center for Heavy Ion Research in Darmstadt, Germany, should help the element gain official recognition. “In contrast to the first discovery, we are a different team at a different place using a different device,” says Christoph Düllmann, who led the GSI collaboration. “I think within the scientific community that will change the view on element 117 from an element that has been claimed to be observed to an element that is confirmed.”

To create 117, with the temporary periodic table placeholder name ununseptium, the researchers smashed calcium nuclei (with 20 protons apiece) into a target of berkelium (97 protons per atom). The experiment was so difficult in part because berkelium itself is tough to come by. “We had to team up with the only place on the planet where berkelium can be produced and isolated in significant quantities,” Düllmann says. That place is the Oak Ridge National Laboratory in Tennessee, which has a nuclear reactor that can create the rare element with a half-life of 330 days. It took the facility about two years to build up a large enough stock of berkelium for the experiment; when about 13 milligrams had accumulated, Oak Ridge scientists shipped it off to Germany for the next stage of the project. At GSI, researchers accelerated calcium ions to 10% of light-speed and sent them colliding into the berkelium. If a calcium and berkelium nucleus collided head-on, occasionally the two nuclei would stick together, fusing to form a new element with a combined total of 117 protons. “We get about one atom per week,” Düllmann says.

The scientists did not observe element 117 directly. Instead, they searched for its daughter products after it radioactively decayed by emitting alpha particles—helium nuclei with two protons and two neutrons. “The heavy nuclei makes an alpha decay to produce element 115, and this also decays by alpha decay,” says Jadambaa Khuyagbaatar of GSI, lead author of a paper reporting the results published on 1 May in Physical Review Letters2.

After a few more steps in this decay chain, one of the nuclei produced is the isotope lawrencium 266—a nucleus with 103 protons and 163 neutrons that had never been seen before. Previously known isotopes of lawrencium have fewer neutrons, and are less stable. This novel species, however, has an astonishingly long half-life of 11 hours, making it one of the longest-lived superheavy isotopes known to date. “Perhaps we are at the shore of the island of stability,” Düllmann says.

No one knows for sure where this island lies, or even if it exists at all. Theory suggests that the next magic numbers beyond those known are around 108, 110 or 114 protons, and 184 neutrons. These configurations, according to calculations, could lead to special properties that allow atoms to survive much longer than similar species. “All existing data for elements 116, 117 and 118 do confirm that lifetimes increase as one goes closer to the neutron number 184, says theorist Witold Nazarewicz of Oak Ridge, who was not involved in the study. “This is encouraging.”

Superheavy magic nuclei may turn out to have interesting shapes that confer stability, such as a so-called bubble configuration with a hole in the middle. “These have never been discovered yet, but the region that is being explored now is really on the edge of bubble territory,” Nazarewicz says.

If an island of stability does exist, there is no limit to how long its nuclei may last. They could turn out to be stable enough to be found in nature, albeit in such small quantities that we have not seen them yet. Numerous searches are on for evidence of these superheavy species already in existence, perhaps having formed through powerful cosmic events such as the merging of two neutron stars. Although none have been found so far, scientists are holding out hope that evidence for the island of stability is just around the corner, one way or another.