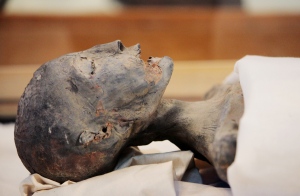 Advanced DNA sequencing finds that genetic reconstruction is possible not just for mummies that have been preserved in freezing conditions but also for those from hot climates such as this one, of King Tutankhamun's mother.

The ancient Egyptians could soon be getting their genomes sequenced as a matter of routine. That’s the view, at least, of the first researchers to use next-generation techniques to analyse DNA from Egyptian mummies.

In a preliminary study that the authors describe as “a first step”, they detected hints of one of the mummies’ ancestral origins, as well as pathogens and a range of plant materials presumably used in the embalming process. The researchers, led by Carsten Pusch, a geneticist at the University of Tübingen in Germany, published their findings last week in the Journal of Applied Genetics1.

Previous studies of DNA from Egyptian mummies have used a technique called polymerase chain reaction (PCR) to amplify specific segments of DNA. But these studies have been controversial. The PCR method is susceptible to contamination with modern DNA, especially when amplifying genes from humans or bacteria that are likely to be present in the environment.

DNA degrades relatively quickly in warm conditions, leading to doubts that it would survive for long in the Egyptian desert. For example, a high-profile DNA analysis of 3,300-year-old royal mummies2 published by Pusch and his colleagues in 2010 attracted scepticism. But the authors stood by their results, arguing that the embalming process must have preserved the DNA despite the heat.

Further support for their argument came in 2011, when researchers amplified DNA from 2,000-year-old mummified crocodile hatchlings3. So researchers on both sides of the debate have been looking forward to the application of next-generation sequencing techniques. Instead of amplifying specific sequences, these methods read millions of small fragments and give a broad picture of all the DNA present in a sample, making it easier to spot contamination.

Since 2010, next-generation sequencing has been used to decipher the genomes of a variety of ancient humans preserved in cold conditions, including a 4,000-year-old Palaeo-Eskimo dubbed Saqqaq Man4; ‘Denisova Man’, a novel hominin unearthed in Siberia5; and ‘Ötzi the Iceman’, a 5,300-year-old mummy found frozen in the Central Eastern Alps6.

Now, Pusch and his colleagues, including Rabab Khairat, have carried out next-generation sequencing on five Egyptian mummified heads held at the University of Tübingen. The heads date from relatively late in ancient Egyptian history — between 806 bc and 124 ad.

The data sets retrieved so far are small — a tiny fraction of what would be required for a whole genome sequence. But they show that human DNA survives in the mummies and that it is amenable to sequencing.

The researchers determined that one of the mummified individuals may belong to an ancestral group, or haplogroup, called I2, believed to have originated in Western Asia. They also retrieved genetic material from the pathogens that cause malaria and toxoplasmosis, and from a range of plants that includes fir and pine — both thought to be components of embalming resins — as well as castor, linseed, olive, almond and lotus.

According to Pusch, the proportion of human DNA in the identified sequences is comparable to that from frozen specimens, such as Saqqaq Man. In mummies, “DNA preservation appears to be independent of temperature,” he says.

But Tom Gilbert, who leads two research groups at the Center for GeoGenetics in Copenhagen and was part of the team that sequenced the Saqqaq genome, warns against making such a comparison, because many of the sequences obtained in the latest study were unidentifiable.

Now that Pusch and his colleagues have demonstrated next-generation sequencing in Egyptian mummies, however, moving on to entire genomes “isn’t rocket science”, Gilbert says. “What limits you is the size of a sample. For Denisova Man they had just a finger bone. Here they have the whole mummy.”

Indeed, Pusch and his colleagues say that they are now working on a more comprehensive analysis, and that “entire-genome sequencing of ancient Egyptian individuals is likely to become standard in the not-too-distant future”.

“It would be nice to know more about the origins of the ancient Egyptians,” says Pusch. “Where did they come from? Where did they go? Are there still traces of ancestral DNA in today’s Egypt?”