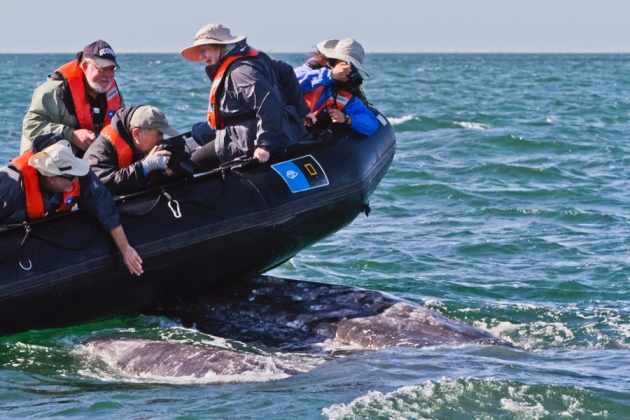 Boat trips to watch whales and dolphins may increasingly be putting the survival of marine mammals at risk, conservationists have warned.

Research published this year shows that the jaunts can affect cetacean behaviour and stress levels in addition to causing deaths from collisions. But some animals are affected more than others and the long-term effects remain unclear, scientists at the International Marine Conservation Congress (IMCC) in Glasgow, UK, heard last week.

“Whale-watching is traditionally seen as green tourism,” says wildlife biologist Leslie New of the US Geological Survey in Laurel, Maryland. “The negative is the potential for disturbance. That disturbance is a worry because we don’t want to do ‘death by 1,000 cuts’.”

The number of people joining trips has expanded hugely since the 1990s, from 4 million in 31 countries in 1991 to 13 million in 119 countries in 2008, the most recent year for which full data are available. In 2008, the International Fund for Animal Welfare, an animal-protection charity in London, estimated the value of the industry at US$2.1 billion.

Although collisions with boats can hurt the animals, researchers are more concerned about effects such as animals failing to feed or using up energy swimming away from the vessels. These seemingly small events can add up, studies suggest.

Earlier this year, for example, marine biologist David Lusseau of the University of Aberdeen, UK, and his team showed that minke whales (Balaenoptera acutorostrata) in Faxaflói Bay in Iceland responded to whale-watching boats as they do to natural predators, upping their speed and respiring more heavily1. But whether this was a direct result of the boats is difficult to pin down: Lusseau, who was not at the meeting, says that soon-to-be-published research by his team shows that behavioural changes are probably not affecting actual numbers of the minke in Faxaflói Bay.

But Lusseau’s group has also shown that the bottlenose dolphins (Tursiops sp.) in Doubtful Sound, New Zealand, could be driven to extinction in decades2. The large number of dolphin-watching trips in the sound is driving the animals away from their preferred areas and forcing them to avoid boats instead of feeding. Dolphin numbers declined from 67 in 1997 to 56 in 2005, the team found.

Several delegates at the IMCC also described the effects on the roughly 70 endangered Irrawaddy dolphins (Orcaella brevirostris) living in the Mekong River between Cambodia and Laos, which are hounded by scores of tourist boats.

Determining which populations are most at risk could help to fix the problem, says Lusseau. He suggests plugging short-term observational data into longer-term population models to tease out whether behavioural changes are temporary or serious long-term threats. There are enough data on species types and locations to assess, at least roughly, where whale-watching should and should not be allowed, he says. But funding and political support are hampering the creation of detailed, localized plans. “There is a lot of lip service being paid to understanding the challenges tourism poses on wildlife, but in practice there is very little financial interest in finding this out,” he says.

Guidelines such as specifying minimum distances between animals and boats, speed limits or no-go areas, can help. But codes vary widely: a 2004 study3 found that just 38% were binding; the rest were voluntary. They are also often inadequate. Even with guidelines in place, boats in the dolphin-watching haven of the Bocas del Toro region of Panama hit and killed at least 10 animals in a population of about 250 in 2012 and 2013, according to research presented to the International Whaling Commission in Cambridge, UK, this year.

Greg Kaufman, executive director of the Pacific Whale Foundation — an organization in Hawaii that runs whale-watching and research trips — holds up the Irrawaddy dolphin as a population desperately in need of protection. “They’re basically killing these animals one at a time,” he says.

But Brian Smith, a zoologist at the Wildlife Conservation Society in New York who has long studied the Irrawaddy group, says that although cetacean tourism is probably stressful for these animals, the main problem is entanglement in fishing nets. And the alternative to fishing for many people in the region is dolphin-watching.

Most of the speakers at the IMCC meeting agreed that more should be done to protect dolphins and whales from tourists. “Although whale-watching is not as bad as whaling,” says New, “it might be that last piece that pushes a species over.”