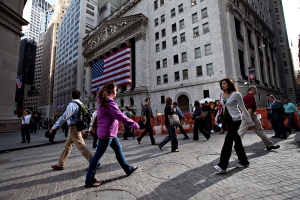 The United States has the right amount of genetic diversity to buoy its economy, claim economists.

“The invalid assumption that correlation implies cause is probably among the two or three most serious and common errors of human reasoning.” Evolutionary biologist Stephen Jay Gould was referring to purported links between genetics and an individual’s intelligence when he made this familiar complaint in his 1981 book The Mismeasure of Man.

Fast-forward three decades, and leading geneticists and anthropologists are levelling a similar charge at economics researchers who claim that a country’s genetic diversity can predict the success of its economy. To critics, the economists’ paper seems to suggest that a country’s poverty could be the result of its citizens’ genetic make-up, and the paper is attracting charges of genetic determinism, and even racism. But the economists say that they have been misunderstood, and are merely using genetics as a proxy for other factors that can drive an economy, such as history and culture. The debate holds cautionary lessons for a nascent field that blends genetics with economics, sometimes called genoeconomics. The work could have real-world pay-offs, such as helping policy-makers to “reduce barriers to the flows of ideas and innovations across populations", says Enrico Spolaore, an economist at Tufts University near Boston, Massachusetts, who has also used global genetic-diversity data in his research.

But the economists at the forefront of this field clearly need to be prepared for harsh scrutiny of their techniques and conclusions. At the centre of the storm is a 107-page paper by Oded Galor of Brown University in Providence, Rhode Island, and Quamrul Ashraf of Williams College in Williamstown, Massachusetts1. It has been peer-reviewed by economists and biologists, and will soon appear in American Economic Review, one of the most prestigious economics journals.

The paper argues that there are strong links between estimates of genetic diversity for 145 countries and per-capita incomes, even after accounting for myriad factors such as economic-based migration. High genetic diversity in a country’s population is linked with greater innovation, the paper says, because diverse populations have a greater range of cognitive abilities and styles. By contrast, low genetic diversity tends to produce societies with greater interpersonal trust, because there are fewer differences between populations. Countries with intermediate levels of diversity, such as the United States, balance these factors and have the most productive economies as a result, the economists conclude.

The manuscript had been circulating on the Internet for more than two years, garnering little attention outside economics — until last month, when Science published a summary of the paper in its section on new research in other journals. This sparked a sharp response from a long list of prominent scientists, including geneticist David Reich of Harvard Medical School in Boston, Massachusetts, and Harvard University palaeoanthropologist Daniel Lieberman in Cambridge.

In an open letter, the group said that it is worried about the political implications of the economists’ work: “the suggestion that an ideal level of genetic variation could foster economic growth and could even be engineered has the potential to be misused with frightening consequences to justify indefensible practices such as ethnic cleansing or genocide,” it said.

“Our study is not about a nature or nurture debate.”

The critics add that the economists made blunders such as treating the genetic diversity of different countries as independent data, when they are intrinsically linked by human migration and shared history. “It’s a misuse of data,” says Reich, which undermines the paper’s main conclusions. The populations of East Asian countries share a common genetic history, and cultural practices — but the former is not necessarily responsible for the latter. “Such haphazard methods and erroneous assumptions of statistical independence could equally find a genetic cause for the use of chopsticks,” the critics wrote.

They have missed the point, responds Galor, a prominent economist whose work examines the ancient origins of contemporary economic factors. “The entire criticism is based on a gross misinterpretation of our work and, in some respects, a superficial understanding of the empirical techniques employed,” he says. Galor and Ashraf told Nature that, far from claiming that genetic diversity directly influences economic development, they are using it as a proxy for immeasurable cultural, historical and biological factors that influence economies. “Our study is not about a nature or nurture debate,” says Ashraf.

“It seems like the devil is in the interpretation more than the actual application of the statistics,” says Sohini Ramachandran, a population geneticist at Brown University who provided the genetic data for the study. She adds that Galor and Ashraf used estimates of genetic diversity that she and her colleagues specifically developed to overcome many of the confounding factors caused by the overlapping genetic and cultural histories of neighbouring countries.

Galor and Ashraf are not the first economists to use genetic-diversity data. Spolaore has also found that the differences in genetic diversity between countries can predict discrepancies in their level of economic development2. But he is clear that this is not necessarily a causal relationship:  “In my view it’s not genetic diversity itself that is responsible for this correlation,” he says. “A lot of this could be culture.”

Some say that the field needs a dose of rigour. Many studies linking genetic variation to economic traits make basic methodological errors, says Daniel Benjamin, a behavioural economist at Cornell University in Ithaca, New York. He is part of the Social Science Genetics Association Consortium, a group that brings together social scientists, epidemiologists and geneticists to improve such studies. Problems that medical geneticists have known about for years — such as those stemming from small sample sizes — crop up all too often when economists start to work with the data, he says.

For instance, while searching for genetic associations with factors such as happiness and income in a study of 2,349 Icelanders, Benjamin and his colleagues found a statistically significant association between educational attainment and a variant in a gene involved in breaking down a neurotransmitter molecule3. But the researchers could not replicate this association in three other population samples — a test for false positives that is standard practice in medical genetics — and the team now has reservations about the association. If the field is to develop fruitfully, “I think it’s essential for us to have geneticists involved”, says Benjamin. “We couldn’t do it without their help and insight.”

In the original text, we wrongly attributed to Enrico Spolaore the opinion that using genetic data in economics could help policy-makers to set immigration levels. He actually suggested that the work could reduce barriers to the flows of ideas and innovations across populations. The text has been amended to reflect that.