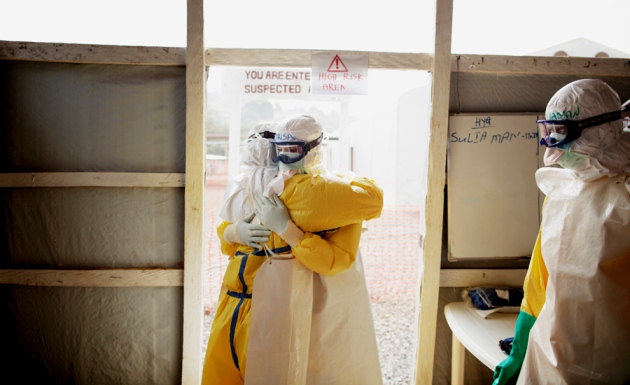 The number of cases in West Africa’s Ebola epidemic has fallen too low for large-scale medical trials to be completed.

After failing to deliver new treatments in time to fight the now-waning Ebola epidemic in West Africa, public-health experts are planning for speedier clinical trials during future outbreaks.

“Everyone is delighted that we are going to no cases,” says the World Health Organization’s (WHO) assistant director-general Marie-Paule Kieny, “but research and development is too late by a factor of months. We need to see what can be done in order to have the products more rapidly available for another outbreak.”

In an interview last week at the annual WHO meeting of member states in Geneva, Switzerland, Kieny said that the agency is working on a framework to identify pathogens that merit advanced research. The framework would catalogue the work needed to prepare potential treatments, vaccines and diagnostics for large-scale efficacy testing in the event of an outbreak.

The plan, a draft of which could be ready by the end of the year, will also spell out how researchers, companies and health agencies should agree to share data collected in publicly funded studies.

It was only in March — a full year after the Ebola outbreak was first reported — that large-scale tests of candidate vaccines got under way. Some of those trials have little chance of being completed because cases are now too rare: the US National Institute of Allergy and Infectious Diseases, which is testing a preventive vaccine, estimates that it would need to enrol more than 150,000 people in Guinea to show that its vaccine works.

Although trials of Ebola drugs and vaccines were set up at a breakneck pace compared with the years it normally takes to organize large clinical trials, the researchers behind them have been frustrated by delays. “We have said that we need to conduct trials in this outbreak, and we’ve largely failed, and that’s desperately disappointing,” says Trudie Lang, a global-health researcher at the University of Oxford, UK, who has been involved with clinical trials of Ebola treatments.

Similar concerns arose during the severe acute respiratory syndrome outbreak of 2003–04 and the 2009 H1N1 flu pandemic; after both events, researchers drafted study designs that could speed up future trials in outbreaks caused by respiratory pathogens. But there has not been a similar effort to coordinate trials for haemorrhagic diseases such as Ebola, which are less likely to spread to wealthy nations.

The WHO framework aims to boost readiness to conduct trials for diseases that could cause global health emergencies. Although it has not been decided which diseases will qualify, Lassa fever, Rift Valley fever and Middle East respiratory syndrome are candidates.

The delays in developing trials of Ebola treatments, researchers say, were due to a disconnect between organizations caring for patients and those leading the trials; refusals to share data; and failures to perform the efficacy and safety tests that could have been done before the outbreak (see Nature 511, 520; 2014).

“We need to do the phase I studies in humans and have a small stockpile rather than stop at the animal stage,” says England’s chief medical officer Sally Davies.

Trials also lagged because of disagreements over logistics and ethics. For example, after the medical aid group Médecins Sans Frontières (Doctors without Borders) and researchers at the University of Oxford organized trials of the drug brincidofovir that did not include placebo groups, the US Food and Drug Administration pushed for randomized trials that would include untreated controls. The brincidofovir trial eventually went forward without a control group.

Data-sharing roadblocks have also occurred at all levels. The experimental drug ZMapp was given to a handful of patients before supplies ran out in August 2014. But detailed information on the patients’ reactions to the drug has not been released, owing to fears that this would prevent researchers from publishing on the cases. Similarly, pharmaceuticals firm Chimerix of Durham, North Carolina, would not publicly reveal why it withdrew support for a trial of brincidofovir in late January after four patients had been treated, but Kieny says that the decision was due to the drug’s lack of efficacy.

At a broader scale, the WHO cannot publicly release comprehensive epidemiological information because the data are owned by countries where cases occur.

Kieny is trying to persuade publishers to agree that researchers can release analyses of patient and laboratory data during health emergencies without compromising their ability to publish on it. She is also trying to broker an agreement with funding agencies that data from publicly funded safety and efficacy trials in outbreaks must be made widely available.

The original version of this story did not explicitly state that the US Food and Drug Administration was not consulted about or involved in the design of the Oxford University brincidofovir study; it has advocated generally for the conduct of randomized clinical trials to study drugs against Ebola virus disease. The text has been updated to reflect this.