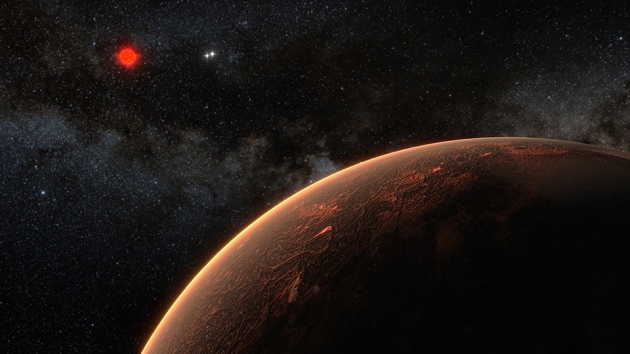 Proxima Centauri, the star closest to the Sun, has an Earth-sized planet orbiting it at the right distance for liquid water to exist. The discovery, reported today in Nature1, fulfils a longstanding dream of science-fiction writers — a potentially habitable world that is close enough for humans to send their first interstellar spacecraft.

“The search for life starts now,” says Guillem Anglada-Escudé, an astronomer at Queen Mary University of London and leader of the team that made the discovery.

Humanity’s first chance to explore this nearby world may come from the recently announced Breakthrough Starshot initiative, which plans to build fleets of tiny laser-propelled interstellar probes in the coming decades. Travelling at 20% of the speed of light, they would take about 20 years to cover the 1.3 parsecs from Earth to Proxima Centauri.

Proxima’s planet is at least 1.3 times the mass of Earth. The planet orbits its red-dwarf star — much smaller and dimmer than the Sun — every 11.2 days. “If you tried to pick the type of planet you’d most want around the type of star you’d most want, it would be this,” says David Kipping, an astronomer at Columbia University in New York City. “It’s thrilling.”

Earlier studies had hinted at the existence of a planet around Proxima. Starting in 2000, a spectrograph at the European Southern Observatory (ESO) in Chile looked for shifts in starlight caused by the gravitational tug of an orbiting planet. The resulting measurements suggested that something was happening to the star every 11.2 days. But astronomers could not rule out whether the signal was caused by an orbiting planet or another type of activity, such as stellar flares.

In January 2016, Anglada-Escudé and his colleagues launched a campaign to nail down the suspected Proxima planet. ESO granted their request to observe using a second planet-hunting instrument, on a different telescope, for 20 minutes almost every night between 19 January and 31 March. “As soon as we had 10 nights it was obvious,” Anglada-Escudé says.

The team dubbed the work the ‘pale red dot’ campaign, after the famous 'pale blue dot' photograph taken of Earth by the Voyager 1 spacecraft in 1990. Because Proxima is a red-dwarf star, the planet would appear reddish or orangeish, perhaps bathed in light similar to the warm evening tints of Earth.

The exoplanet next door

NOTE This video contains an error. At 0:54 an animation representing the radial velocity method for finding exoplanets is incorrect. Here is a link to a correct representation https://www.eso.org/public/unitedkingdom/videos/eso1035g/

Although the planet orbits at a distance that would permit liquid water, other factors might render it unlivable. It might be tidally locked — meaning that the same hemisphere always faces the star, which scorches one side of the planet while the other remains cool. The active star might occasionally zap the planet with destructive X-ray flares. And it's unclear whether the planet has a protective, life-friendly atmosphere.

Proxima itself belongs to the triple-star system Alpha Centauri. In 2012, a Nature paper reported that an Earth-mass planet orbited another member of that stellar trio, Alpha Centauri B2. That result has now mostly been dismissed3, 4, but exoplanet specialists say the Proxima claim is more likely to hold up.

“People call me Mr Sceptical, and I think this result is more robust,” says Artie Hatzes, an astronomer at the Thuringian State Observatory in Tautenburg, Germany.

This time, the combination of new observations and older measurements dating back to 2000 increases confidence in the finding, Anglada-Escudé’s team argues. “It’s stayed there robustly in phase and amplitude over a very long time,” says team member Michael Endl, an astronomer at the University of Texas at Austin. “That’s a telltale sign of a planet.” The data even contain hints that a second planet may exist, orbiting Proxima somewhere between every 100 and 400 days.

The researchers now hope to learn whether the Proxima planet's pass across the face of its star can be seen from Earth. The chances are low, but such a ‘transit’ could reveal details of the planet, such as whether it has an atmosphere. A team led by Kipping has been independently looking for transits around Proxima, and is frantically crunching its data in search of any signal.

The discovery of the Proxima planet comes at a time of growing scientific interest in small planets around dwarf stars, says Steinn Sigurdsson, an astrophysicist at Pennsylvania State University in University Park. NASA’s Kepler space telescope has shown that rocky planets are common around such stars, which themselves are the most common type of star in the Galaxy. “This is a total vindication of that strategy,” he says.

One day, the Proxima planet might be seen as the birth of a new stage in planetary research. “It gives us the target and focus to build the next generation of telescopes and one day maybe even get to visit,” says Kipping. “It's exactly what we need to take exoplanetary science to the next level.”

The video accompanying this story contains an error. At 0:54 an animation representing the radial velocity method for finding exoplanets is incorrect. Here is a link to a correct representation https://www.eso.org/public/unitedkingdom/videos/eso1035g/