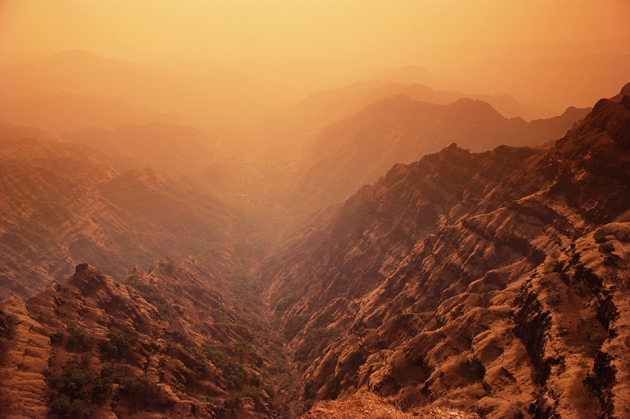 Enormous volcanoes vomited lava over the ancient Earth much more often than geologists had suspected. Eruptions as big as the biggest previously known ones happened at least 10 times in the past 3 billion years, an analysis of the geological record shows.

Such eruptions are linked with some of the most profound changes in Earth’s history. These include the biggest mass extinction, which happened 252 million years ago when volcanoes blanketed Siberia with molten rock and poisonous gases.

“As we go back in time, we’re discovering events that are every bit as big,” says Richard Ernst, a geologist at Carleton University in Ottawa, Canada, and Tomsk State University in Russia, who led the work. “These are magnificent huge things.”

Knowing when and where such eruptions occurred can help geologists to pinpoint ore deposits, reconstruct past supercontinents and understand the birth of planetary crust. Studying this type of volcanic activity on other planets can even reveal clues to the geological history of the early Earth.

Ernst presented the findings this month to an industry consortium that funded the work (see ‘Earth’s biggest eruptions’). He expects to make the data public by the end of the year, through a map from the Commission for the Geological Map of the World in Paris. 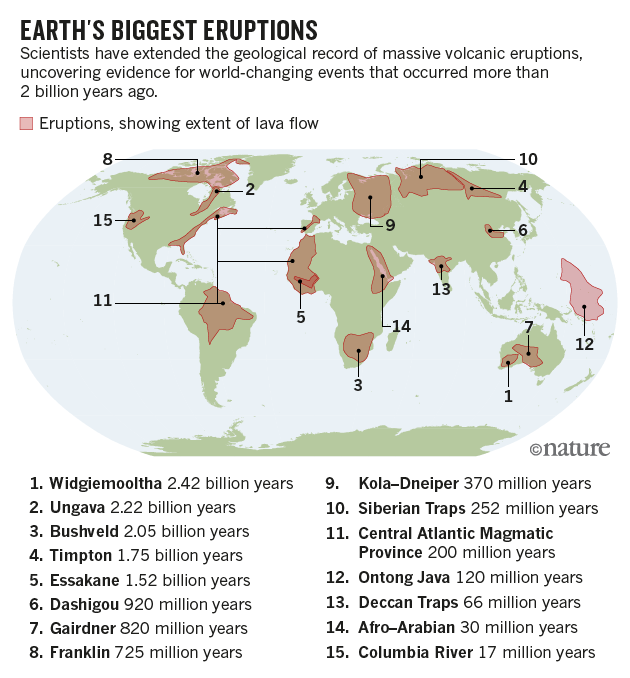 “This will probably be the defining database for the next decade,” says Mike Coffin, a marine geophysicist at the University of Tasmania in Hobart, Australia.

Surprisingly, the ancient eruptions lurk almost in plain sight. The lava they spewed has long since eroded away, but the underlying plumbing that funnelled molten rock from deep in the Earth up through the volcanoes is still there.

Ernst and his colleagues scoured the globe for traces of this plumbing. It usually appears as radial spokes of ancient squirts of lava, fanned out around the throat of a long-gone volcano. The geologists mapped these features, known as dyke swarms, and used uranium–lead dating to pinpoint the age of the rock in each dyke. By matching the ages of the dykes, the researchers could connect those that came from a single huge eruption. During their survey, they found evidence of many of these major volcanic events.

Each of those newly identified eruptions goes into Ernst’s database. “We’ve got about 10 or 15 so far that are probably comparable to the Siberian event,” Ernst says, “that we either didn’t know about or had a little taste, but no idea of their true extent.”

They include a 1.32-billion-year-old eruption in Australia that connects to one in northern China. By linking dyke swarms across continents, scientists can better understand how Earth’s crust has shuffled around over time, says Nasrrddine Youbi, a geologist at Cadi Ayyad University in Marrakesh.

Technically, the eruptions are known as ‘large igneous provinces’ (LIPs). They can spew more than one million cubic kilometres of rock in a few million years. By comparison, the 1980 eruption of Mount St Helens in Washington state put out just 10 cubic kilometres.

These large events also emit gases that can change atmospheric temperature and ocean chemistry in a geological blink of an eye. A modelling study published last month suggests that global temperatures could have soared by as much as 7 °C at the height of the Siberian eruptions (F. Stordal et al. Palaeogeogr. Palaeoclimatol. Palaeoecol. 471, 96–107; 2017). Sulfur particles from the eruptions would have soon led to global cooling and acid rain; more than 96% of marine species went extinct.

But the picture of how LIPs affected the global environment gets murkier the further back in time you get, says Morgan Jones, a volcanologist at the University of Oslo. Uncertainties in dating grow, and it becomes hard to correlate individual eruptions with specific environmental impacts. “It’s at the limit of our understanding,” he says.

On average, LIPs occur every 20 million years or so. The most recent one was the Columbia River eruption 17 million years ago, in what is now the northwestern United States.

Discovering more LIPs on Earth helps to put the geological history of neighbouring planets in perspective, says Tracy Gregg, a volcanologist at the University at Buffalo in New York. She and Ernst will lead a meeting on LIPs across the Solar System at a planetary-science meeting in Texas next week.

Venus, Mars, Mercury and the Moon all show signs of enormous eruptions, Gregg notes. On the Moon, LIP-style volcanism started as early as 3.8 billion years ago; on Mars, possibly 3.5 billion years ago. But without plate tectonics to keep the surface active, those eruptions eventually ceased.

“Other planetary bodies retain information about the earliest parts of planetary evolution, information that we’ve lost on Earth,” Gregg says. “They can give us a window into the early history of our own planet.”

This story wrongly said that ancient Siberian volcanic eruptions could have raised global temperatures by 7 °C per year, rather than over 100 years. The text has been corrected.