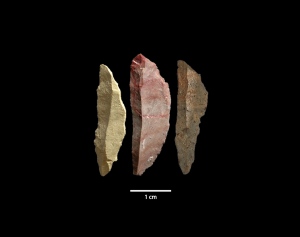 Tiny microlith blades were being used by humans more than 70,000 years ago.

A haul of stone blades from a cave in South Africa suggests that early humans were already masters of complex technology more than 70,000 years ago1.

The tiny blades — no more than about 3 centimetres long on average — were probably used as tips for throwable spears, or as spiky additions to club-like weapons, says Curtis Marean, an archaeologist at Arizona State University in Tempe who led the team that found the bladelets.

Twenty-seven such blades, called microliths by archaeologists, were found in layers of sand and soil dating as far back as 71,000 years ago and representing a timespan of about 11,000 years, showing how long humans were manufacturing the blades.

The find lends credence to the idea that early humans were capable of passing on their clever ideas to the next generation of artisans, creating complex technologies that endured over time. John Shea, a palaeoanthropologist at Stony Brook University in New York, says that it also suggests that “previous hypotheses that 'early' Homo sapiens differed from 'modern' ones in these respects are probably wrong”.

But because the evidence for early human technology is patchy, the idea of its continuous cultural transmission has been disputed. Some archaeologists argue that human populations could have repeatedly devised such complex tools and lost the ability to make them, as the size of the population fluctuated over time2. “It is still tricky to know whether this behaviour is continually there,” says Chris Stringer, who studies human evolution at the Natural History Museum in London. At this time, human groups were likely to be small, and those with the expertise could easily have been wiped out. “If you haven’t got the population size, knowledge can get lost”, he says.

Making these tools is a multistep process. First, people would have collected a rock called silcrete, and then heat-treated it to make it easier to flake into bits. Then, they would have used a larger rock to flake off sharp slivers of rock, blunted them on one side and used them as blades on composite weapons.

Marean thinks these people probably had to be able to talk to each other for such a process to be transmissible. “You have to have high-fidelity transmission of a process like that,” he says. “In order for it to be communicated across generations, we think they almost certainly had complex language.”

But even this might not count as evidence for ‘complex thought’. Some scholars want to see evidence of symbolism – such as art or ornaments3 – in order to grant this.

Nonetheless, the weapons made these early humans a force to be reckoned with. The flakes are “very small and light, and that suggests that they were components on a dart or spear that could be thrown a long distance”, says Marean. There is even the possibility that modern humans used such spear-throwing technology to outsmart Neanderthals when they spread out of Africa and into Europe some 100,000 years ago. The spear points that Neanderthals used were too unwieldy and heavy to be thrown, says Marean. “If you come up against a competitor that has a spear thrower, you’re at a distinct disadvantage," he says.

But Shea isn’t so sure that microliths were the clincher for humans’ success against other hominin populations. It’s not clear that they brought this technology into Europe. “Microliths seem to show up much later than first appearance dates for Homo sapiens fossils in most parts of Eurasia,” he says. And Stringer is keen that archaeologists don’t underestimate the Neanderthals. Their archaeological record is also incomplete, and more data is needed to understand whether their cognitive skills were also getting more complex. “I’m trying to be fair to the Neanderthals,” he says.