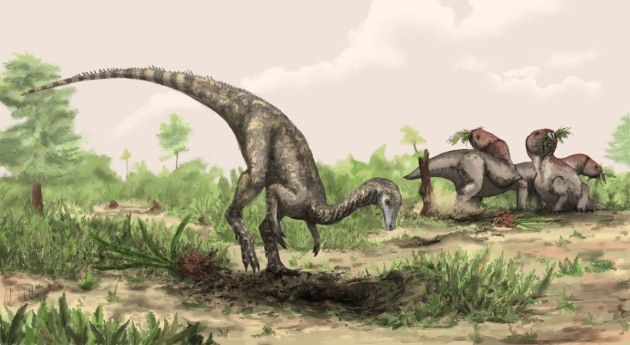 Nyasasaurus may have roamed the southern region of Pangaea during the Triassic period.

The dawn of the dinosaur era was thought to start around 230 million years ago, but a new discovery moves their origin 15 million years further back in time.

Palaeontologists have long sought the earliest dinosaurs. Now, skeletal fragments from a pair of specimens indicate that dinosaurs emerged in the wake of the largest mass extinction of all time — the crash that occurred around the transition from the Permian to the Triassic period about 252 million years ago.

At 243 million years old, Nyasasaurus parringtoni may be the oldest known dinosaur. Sterling Nesbitt, a palaeontologist at the University of Washington in Seattle, and his colleagues describe the animal in a study published today in Biology Letters1.

The fragmentary nature of the find obscures the animal's form, but based on its relationship to early dinosaurs and dinosauriform ancestors, Nesbitt expects that Nyasasaurus was a leggy, long-necked bipedal creature about “the size of a Labrador retriever".

Even if Nyasasaurus doesn’t turn out to be a true dinosaur, Nesbitt points out, the finding demonstrates that close ancestors of dinosaurs must have existed 15 million years earlier than the oldest known dinosaur, Eoraptor, found in South America.

The age of Nyasasaurus hints that dinosaurs were just one lineage of archosaurs —‘ruling reptiles’ that include pterosaurs, crocodiles and their relatives — which proliferated in the aftermath of the Permian mass extinction. The age of dinosaurs has not yet ended. Modern birds are direct descendants of the lineage, carrying on the dinosaurian reign much like their small, svelte ancestors that scurried through Pangaea's Triassic forests.

The fossils were discovered in the 1930s in southern Tanzania by Rex Parrington, a palaeontologist at the University of Cambridge, UK. Alan Charig, a student of Parrington's who studied Nyasasaurus for 50 years, thought the bones represented either the earliest dinosaur or its closest relative yet found. Charig passed away before he published a formal description, but Nesbitt’s study, which completes the work Charig started, names him as a co-author.

Subtle, but distinctive, characters on the humerus and vertebrae indicate that Charig’s interpretation was correct. The humerus also shows signs that Nyasasaurus grew rapidly, which is characteristic of the early dinosaurs.

Michael Benton, a palaeontologist at the University of Bristol, UK, agrees that Nyasasaurus sits near the base of the dinosaur family tree. “The authors have taken a properly conservative stance in not being 100% certain it's a dinosaur,” Benton says, but the discovery nonetheless confirms an earlier origin for dinosaurs.

The extra 15 million years that Nyasasaurus adds to the provenance of dinosaurs suggests that the initial expansion of dinosaurs happened over a longer time frame than previously thought, say the authors. And its origin in Tanzania supports the case for dinosaurs first evolving on what would have been the southern region of the supercontinent Pangaea.