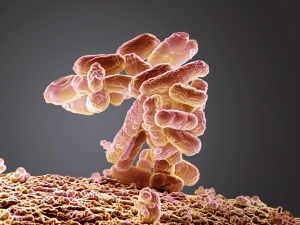 A clump of E. coli bacteria in the human gut, as revealed by a scanning electron microscope.

The trillions of microbes in the human gut contribute to obesity and to the risk of diseases such as diabetes. This microbial menagerie — the microbiome — also has a role in cancer, researchers report today in Science1.

Mice with inflammatory bowel disease contain higher proportions of toxin-producing bacteria that may lead to colorectal cancer, the researchers say. Moreover, people with colorectal cancer were found to be more likely than healthy people to harbour these bacteria.

The findings suggest a broader avenue of cancer research. The microbiome found elsewhere in the body could also initiate tumours, so tinkering with it might help to prevent cancers, says Jeffrey Pollard, a microbiologist at the Albert Einstein College of Medicine in New York, who was not involved in the latest study.

Researchers have known for decades that microbes can cause cancer. Many viruses turn infected cells cancerous as means of spreading their genetic material.The pathogenic bacterium Helicobacter pylori lies at the root of most of peptic ulcers, which can seed stomach cancers. The latest work, however, indicates that an ordinarily harmless strain of Escherichia coli, a common gut bacterium, can cause cancer when the gut is inflamed.

“They're not exactly your flagship disease-causing bacteria,” says Christian Jobin, a microbiologist at the University of North Carolina at Chapel Hill, who led the study. “They wear a different mask. They wear the bad-guy mask now.”

Patients with inflammatory bowel disease develop colorectal cancer at rates as much as several fold higher than people without troubled stomachs. Researchers have attributed this to DNA-damaging molecules produced by immune cells in the gut, which are overactive in these diseases. But the latest work suggests that bacteria are key.

Jobin and his team reared mice with a mutation that makes them susceptible to inflammatory bowel disease in germ-free cages. They then moved these mice to cages where mice teeming with bacteria had previously lived. After five months, all of the mutant mice had developed bowel disease, and 60–80% of them had colon cancer.

The mutant mice also developed a different gut microbiome than normal mice, with a much higher proportion of E. coli. One strain, called E. coli NC101, stood out. It has been linked to aggressive forms of bowel disease in mice and makes colibactin, a protein that damages DNA.

E. coli strains that did not make colibactin also flourished in the guts of the mutant mice, causing bowel disease but not colorectal tumours, the researchers report.

Many humans also harbour bacteria that produce colibactin. The researchers found them in the stools of 20% of 24 healthy people, 40% of 35 people with inflammatory bowel disease and 66% of 21 people with colorectal cancer. But how the colibactin-producing bacteria lead to cancer isn’t clear, Jobin says.

He hypothesizes that gut inflammation causes colibactin-producing strains to bloom while simultaneously weakening epithelial cells that line the gut, making them more susceptible to DNA damage. If this happens for long enough, a cell will turn cancerous, Jobin suggests.

Working out these steps in the human gut could help to prevent cancer, he adds. Doctors could use DNA sequencing to survey their patients’ guts for microbes producing genes that cause cancer, and then eliminate them with antibiotics. Similarly, probiotics could displace cancer promoting bacteria.

Pollard says that people already do this. Some fruits and vegetables seem to stave off cancer, whereas red meat2 and other foods are associated with higher cancer risks. Perhaps, Pollard says, foods prevent and promote cancer by shaping the microbiome.