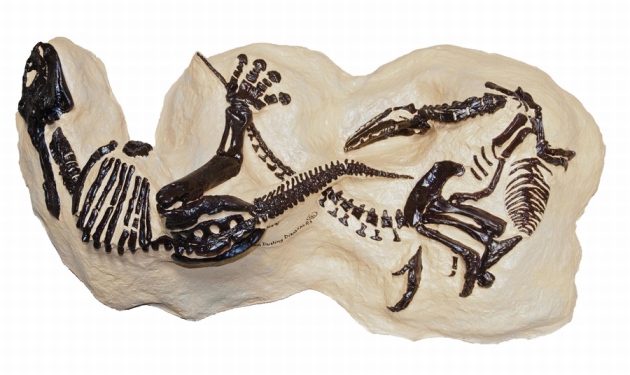 Many palaeontologists dispute that the ceratopsian and tyrannosaurid dinosaurs shown here died while sparring.

The fossils of a ceratopsian and a tyrannosaurid dinosaur, which the auction house Bonhams says were fighting when they died, failed to sell today in New York City.

The auction house abruptly pulled the items from sale after bidding stalled at US$5.5 million, below the fossils' unspecified reserve price. Before the auction began, Bonhams had estimated the fossils would garner between $7 million and $9 million.

The toothy tyrannosaurids, relatives of Tyrannosaurus rex, and the horned ceratopsians, which include Triceratops, lived alongside each other for millions of years, mostly in what is now North America. Their dramatic battles are widely suspected from toothmarks found in fossils. So far, however, nobody has found a fossil specimen in which the two were caught duelling.

Fossils of animals fighting are rare because fossilization most readily happens when sediment, transported by water, is dumped over corpses. Capturing a battle requires an exceptional event such as a freak sandstorm or an avalanche to bury animals quickly. Yet this is what Bonhams suggests happened to the animals, which have not been identified to the species level.

“We think a sand bar suddenly liquefied during an earthquake and the dinosaurs got swallowed up,” says Tom Lindgren, a director of natural history at Bonhams in Los Angeles, California. But palaeontologists with extensive experience in collecting fossils in the region where the specimens were found disagree.

“They were found in river-channel sandstone, suggesting that the bodies were deposited on a sand bar,” says palaeontologist Jack Horner at the Museum of the Rockies in Bozeman, Montana. Sand bars, he says, “catch trees, carcasses and other junk that falls into rivers. The chances that fighting dinosaurs would both end up on the same sandbar is remote at best.”

As to the evidence that the animals were locked in combat, Lindgren points to the tyrannosaurid teeth embedded in the bones of the ceratopsian. “We have one tooth in the pelvis, one in the neck and 24 unembedded broken teeth,” says Lindgren.

Whether the teeth actually came from the tyrannosaurid in question is, however, conjecture, because the mouth of the predator is closed and it is not possible to match broken teeth to open sockets in the jaw. But Lindgren is confident that everything will fall into place once the fossils sell. “I am certain that if someone CT-scans the skull, they will be able to match things up,” he says.

Denver Fowler, a palaeontologist at the Museum of the Rockies who has studied tyrannosaurid bite marks on ceratopsian skeletons, strongly disagrees with Lindgren’s assessment that the animals were engaged in combat. “It’s all speculation, there’s no claim of duelling that is defensible here,” says Fowler.

Horner suspects that Lindgren will say whatever he feels is necessary to get the best price for the fossils, regardless of evidence.“ It's about sales, not science,” Horner says.

For Thomas Carr, a tyrannosaurid palaeontologist at Carthage College in Kenosha, Wisconsin, the move to auction the fossils is a tragedy. “We have so few specimens to begin with, it is extraordinarily damaging when fossils like these vanish into private collections,” he says. “Frankly, when you put a fossil on sale for $9 million, it's ransom.”

Where the fossils will end up is now in limbo. “We’ll look for a good home,” says Bonhams spokesperson Anne Wilson.