Scorching temperatures and scarce rainfall has left large swathes of the United States in drought, with the 'breadbasket states', such as Iowa and Indiana, among the worst affected. The extreme weather conditions have wreaked havoc with the nation’s crop production, particularly maize (corn) and soya beans. Given that the country is the world’s top exporter of maize and one of the largest growers of soya beans, Nature explains how the drought could have ramifications for global food supplies, and what science is doing to help. 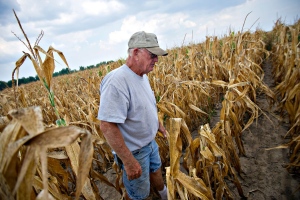 A farmer inspects his drought-damaged maize crop in Illinois — just one of several states affected by scarce June rainfall.

How extreme are the weather conditions?

Average temperatures on the US mainland in June peaked at 21.8 °C, which is 1.1 °C above the twentieth-century average, according to the National Climatic Data Center at the National Oceanic and Atmospheric Administration (NOAA) in Silver Spring, Maryland. The June temperatures meant that the first half of 2012 was one of the warmest on record, and contributed to the warmest 12-month period in the United States since records began in 1895. On average, just 5.8 centimetres of rain fell in June — 1.6 cm less than normal, making June 2012 the tenth driest on record, says NOAA. As of 3 July, more than half of the 48 contiguous US states had seen drought conditions, the largest percentage for the past 12 years, according to the US Drought Monitor service, run by the National Drought Mitigation Center in Lincoln, Nebraska.

And there is not much relief in sight. Dry weather is expected to continue into August in the southern to central Plains, across the Gulf coast and along the west coast, according to NOAA.

How much damage has been done?

On 18 July, nearly 1,300 counties across 29 states were declared “natural disaster areas” by the US Department of Agriculture (USDA) as a result of crop damage and loss caused by the drought and heat.

“Persistent and extreme June dryness across the central and Eastern corn belt and extreme late June and early July heat from the central Plains to the Ohio River Valley have substantially lowered yield prospects across most of the major growing regions,” says the July issue of the USDA's monthly report, World Agricultural Supply and Demand Estimates.

How have the crop losses affected prices?

The United States exports 53% of the world's maize and almost 43% of soya beans globally, so any change in the US supply of these crops will affect prices worldwide. The price of maize last week hit a record US$8.16 per bushel ($321 per tonne), and traders think that prices could rise above $9 per bushel by early August unless there is a significant change in the weather. That seems unlikely at the moment, says Maximo Torero, a food-market and trade analyst at the International Food Policy Research Institute in Washington DC. Prices of soya beans are also up by almost 30% since the beginning of June, and by almost 60% since the end of last year, he says.

How does this compare to the food crisis in 2008?

The prices of soya beans and maize have passed the 2008 peak. But wheat, rice and oil prices have not matched their 2008 highs, so that will help to stave off a similar crisis, says Torero. There is also no sign of the export restrictions that were put in place in 2008 that further exacerbated prices.

Who will feel the effects most?

The direct impact of the increase in maize and soya bean prices will be felt in net importing countries such as Mexico and China. The price hikes are unlikely to affect sub-Saharan Africa directly, because people there tend to consume locally produced maize and are not major consumers of soya beans, says Torero.

How can science help?

Researchers are investigating how certain crop varieties — including sorghum and pearl millet, which originated in Africa — are able to withstand heat and drought conditions, says Mitchell Tuinstra, an agronomist at Purdue University in West Lafayette, Indiana. Many scientists are trying to unravel the complex crop genetics that allows these crops to tolerate environmental extremes, and they hope to use conventional breeding methods to create varieties that perform even better. There has already been some success with sorghum, which has shown improved productivity in drought conditions that occur late in the growing season in temperate and tropical environments, says Tuinstra.

In the meantime, some are turning to alternative solutions. “If I had a rain prayer or a rain dance I could do, I would do it,” US agriculture secretary Tom Vilsack told reporters last week.