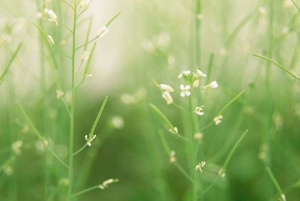 Thale cress (Arabidopsis thaliana) might be able inherit genes from grandparents outside its DNA, bypassing faulty genes passed on by its parents.

Two publications are seeking to resurrect claims that plants can reject the inheritance of a mutated gene from their parents, in favour of a healthier ‘ancestral’ copy from their grandparents.

Susan Lolle, a plant geneticist now at the University of Waterloo in Canada, and her colleagues first published evidence in 2005 that plants had passed on genes correctly two generations down, even though the genome of the generation in between had only a mutated version1. This type of inheritance would require some hidden reservoir of genetic information outside of DNA, some suggested — perhaps in RNA transcribed from the healthy gene, which the plant would then use to correct the mutated one. If true, those findings would upend the modern concept of genetic inheritance, and predictably they have met with considerable scepticism.

Two groups of researchers later reported that attempts to reproduce those findings had failed2, 3. The original results did not signal a new form of inheritance, these researchers argued: rather, the original experiments were simply contaminated by pollen from other plants bearing the ancestral gene. “Everyone backed away after that,” says Raphaël Mercier, a plant biologist at the French National Institute for Agricultural Research in Versailles.

But Lolle has now collected more data that she says strengthens her position. In a paper published last month by F1000Research4, Lolle reports that cells in parts of a single adult thale cress (Arabidopsis thaliana) plant can bear an ancestral gene, rather than the parental version found in the rest of the plant. That, she says, supports her theory that plants somehow maintain a cache of ancestral genetic information beyond their DNA sequence, and abolishes concerns about polluting pollen.

“If we believe in the veracity of the experiments, these are very intriguing observations,” says Animesh Ray, a systems biologist at the Keck Graduate Institute of Applied Life Sciences in Claremont, California.

The next concern, however, is contamination of a different sort. The assays used to characterize the cells rely on the polymerase chain reaction (PCR), a method for producing lots of copies of one DNA sample. But PCR is notoriously prone to contamination. Lolle says that she has taken steps to limit contamination and has repeated her experiments often enough to make the odds of a spurious result vanishingly small. But Ray says that he would be more comfortable with the data if Lolle and her team performed additional control experiments to make sure contamination is not the issue.

Luca Comai, a plant biologist at the University of California, Davis, doesn't discount the new results, but remains dubious. “Is there a magical genetic cache that allows the ancient memories of DNA past to come through?” he says. “I don’t see compelling evidence for it.”

To further back her claims, Lolle points to the publication of a second paper, also in F1000Research5, by an independent group asserting to have found evidence of the same phenomenon, this time while studying vitamin-C synthesis in A. thaliana. But Comai and others say that this paper does less to convince them, because it has not ruled out possible contamination by errant seeds.

Despite the rampant scepticism, Lolle and her colleagues deserve credit for pursuing a difficult problem, says Ray. “It takes courage to actually try to figure out these complex events,” he says. “And they may be on to something.”