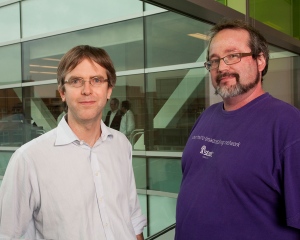 The DNA sequences — which allow precise control of gene activity in the bacterium Escherichia coli — are the first output of BIOFAB, based in Emery­ville, California, which calls itself “the world’s first biological design-build facility”. Launched in 2009 with a US$1.4-million grant from the US National Science Foundation, BIOFAB aims to advance synthetic biology by creating standard biological ‘parts’ in the form of DNA sequences that control gene expression. These standard sequences should allow biologists to engineer cells that can make medicines and perform other useful tasks simply by plugging in various sets of genes.

The sequences are meant to overcome a key barrier to synthetic biology: genes inserted into an organism do not behave predictably, even in such a well-understood workhorse as E. coli. “You would think after a generation of genetic engineering, expressing genes with precision in an organism as well utilized as E. coliwould be pretty straightforward. It turns out it’s not,” says BIOFAB co-director Drew Endy, a synthetic biologist at Stanford University in California.

For a cell to express a gene — that is, transcribe it into an RNA molecule and then translate that RNA into a protein — other sequences recognized by the cell’s machinery must precede it. A promoter sequence is needed to make an RNA transcript, and a ribosome binding site (RBS) is crucial for protein translation.

Over the past three decades, scientists have amassed collections of these sequences and used them to express genes in which they are interested. Some sequences tend to be ‘strong’ and others ‘weak’, resulting in varying levels of RNA and protein being produced.

But a team led by Endy and BIOFAB co-director Adam Arkin, of Lawrence Berkeley National Laboratory in Berkeley, California, has found that the activities of those sequences are far from predictable. In two papers published online this week in Nature Methods1, 2, the team reports inserting many different combinations of promoters and RBS sequences in front of genes encoding fluorescent proteins, and then measuring the level of protein that was made. “It was a bloody mess,” says Arkin, with each promoter–RBS combination having varying effects depending on the gene.

He and Endy also cite an earlier finding that a scientist hoping to express a protein at a particular level has just a 50% chance of producing the required amount within a factor of two. Such hit-or-miss expression poses a major challenge to synthetic biologists who would like to create genetic circuits involving dozens of genes.

As a solution, the BIOFAB team designed promoter and RBS sequences for E. colithat do not interfere with downstream DNA, so that their effects are independent of the specific gene they are paired with. The sequences should provide scientists with a much tighter grip on gene expression, offering around a 93% chance of hitting a desired level of expression within a factor of two2. Researchers can obtain the sequences for free online (see http://www.biofab.org/data), and Arkin says that some of his colleagues are already finding them useful.

Endy and Arkin’s team also devised a statistical method1 to measure the variability in the performance of their promoter and RBS sequences, and indeed any genetic part to be used in synthetic-biology applications. The method should allow researchers to create a kind of specification sheet for each biological part, making it easier for scientists to develop and share their work.

Randy Rettberg, a synthetic biologist at the non-profit organization the iGEM Foundation in Cambridge, Massachusetts, who has worked with Endy on similar projects, says that more labs should follow BIOFAB’s lead and industrialize the production of biological parts. And synthetic biologist Alistair Elfick of the University of Edinburgh, UK, says that the BIOFAB products should help synthetic biologists to design bigger and more complicated circuits.

“I think the community is very aware that we’ve got a long way to go before we can fulfil our dream of in silico design of genetic circuits we can just pop into a cell and run like an app,” Elfick says.

This article gave the wrong affiliation for Randy Rettberg – he is at the iGEM Foundation not the Massachusetts Institute of Technology. The text has been corrected to reflect this.