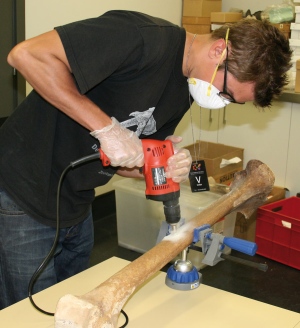 Palaeogeneticist Morten Allentoft used the bones of extinct moa birds to calculate the half-life of DNA.

Few researchers have given credence to claims that samples of dinosaur DNA have survived to the present day, but no one knew just how long it would take for genetic material to fall apart. Now, a study of fossils found in New Zealand is laying the matter to rest — and putting an end to hopes of cloning a Tyrannosaurus rex.

After cell death, enzymes start to break down the bonds between the nucleotides that form the backbone of DNA, and micro-organisms speed the decay. In the long run, however, reactions with water are thought to be responsible for most bond degradation. Groundwater is almost ubiquitous, so DNA in buried bone samples should, in theory, degrade at a set rate.

Determining that rate has been difficult because it is rare to find large sets of DNA-containing fossils with which to make meaningful comparisons. To make matters worse, variable environmental conditions such as temperature, degree of microbial attack and oxygenation alter the speed of the decay process.

But palaeogeneticists led by Morten Allentoft at the University of Copenhagen and Michael Bunce at Murdoch University in Perth, Australia, examined 158 DNA-containing leg bones belonging to three species of extinct giant birds called moa. The bones, which were between 600 and 8,000 years old, had been recovered from three sites within 5 kilometres of each other, with nearly identical preservation conditions including a temperature of 13.1 ºC. The findings are published today in Proceedings of the Royal Society B1.

By comparing the specimens' ages and degrees of DNA degradation, the researchers calculated that DNA has a half-life of 521 years. That means that after 521 years, half of the bonds between nucleotides in the backbone of a sample would have broken; after another 521 years half of the remaining bonds would have gone; and so on.

The team predicts that even in a bone at an ideal preservation temperature of −5 ºC, effectively every bond would be destroyed after a maximum of 6.8 million years. The DNA would cease to be readable much earlier — perhaps after roughly 1.5 million years, when the remaining strands would be too short to give meaningful information.

“This confirms the widely held suspicion that claims of DNA from dinosaurs and ancient insects trapped in amber are incorrect,” says Simon Ho, a computational evolutionary biologist at the University of Sydney in Australia. However, although 6.8 million years is nowhere near the age of a dinosaur bone — which would be at least 65 million years old — “We might be able to break the record for the oldest authentic DNA sequence, which currently stands at about half a million years,” says Ho.

The calculations in the latest study were quite straightforward, but many questions remain.

“I am very interested to see if these findings can be reproduced in very different environments such as permafrost and caves,” says Michael Knapp, a palaeogeneticist at the University of Otago in Dunedin, New Zealand.

Moreover, the researchers found that age differences accounted for only 38.6% of the variation in DNA degradation between moa-bone samples. “Other factors that impact on DNA preservation are clearly at work,” says Bunce. “Storage following excavation, soil chemistry and even the time of year when the animal died are all likely contributing factors that will need looking into.”