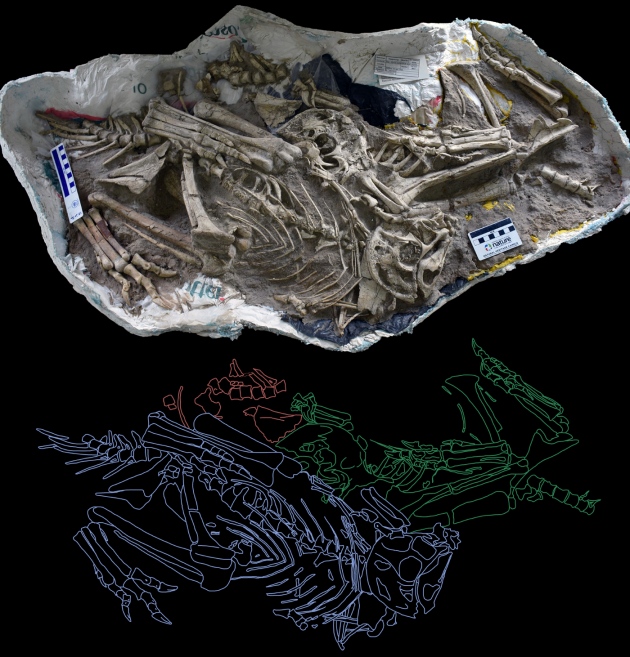 Three young dinosaurs are preserved in this block of stone; the coloured diagram illustrates the relative position of the animals.

The fossilized remains of three young dinosaurs who seem to have been snuggled together in sleep have been found in a stone block that poachers hacked out of the Mongolian desert.

Researchers say the 70-million-year-old specimens are the first known example of dinosaurs sleeping in a group, a behaviour called communal roosting. Many modern species, including crows and bats, engage in the practice, which helps animals to regulate their body temperature and avoid predators.

The three dozy dinosaurs were probably relatives and possibly siblings, says vertebrate palaeontologist Greg Funston of the University of Alberta in Canada, who led the team that analysed the fossils. The trio “clearly had a quite close bond”, Funston says. “They were living together at the time of death.” He is scheduled to describe the fossils on 25 August at the annual meeting of the Society of Vertebrate Paleontology in Calgary, Canada.

Mongolian customs agents seized the stone specimen at an airport in 2006, before it could be smuggled out of the country. A geochemical analysis by Federico Fanti, a vertebrate palaeontologist at the University of Bologna in Italy, and his colleagues suggests that the dinosaurs probably come from the Bugiin Tsav fossil site in the Gobi desert. Fanti presented the geochemical data on 24 August, at the same palaeontology meeting.

Funston’s team identified the fossils as a new species of oviraptorid — a group of dinosaurs with short faces, long necks and toothless beaks that lived during the Cretaceous period, 145 million to 65 million years ago. The species, which has not yet been formally named, has a domed crest on its head, like that of a modern-day cassowary, and walked on two legs.

Unlike most dinosaur fossils, two of the animals in the block are crouched belly down. These two, which are more complete than the third, have their necks curled back towards their bodies, while their arms cradle their heads. The pose “is quite similar to what ostriches and emus do when they get into deep sleep,” Funston says.

A handful of previously discovered fossils capture napping dinosaurs, but all show a lone animal. The new fossil suggests that communal roosting developed in animals with rich social lives, Funston says. Oviraptorids fit the bill: they browsed for food in groups and probably flashed their crests at rivals or potential mates. By contrast, another group of bird-like dinosaurs called troodontids lacked such sophisticated behaviours and did not roost communally.

From the width of the thighbones of the two more extensive skeletons in the block, the researchers estimate that each weighed roughly 45 kilograms, a little more than a German shepherd dog. The third skeleton is too fragmented for the researchers to estimate its weight. But it is roughly the same size as its companions, suggesting the three were close in age. 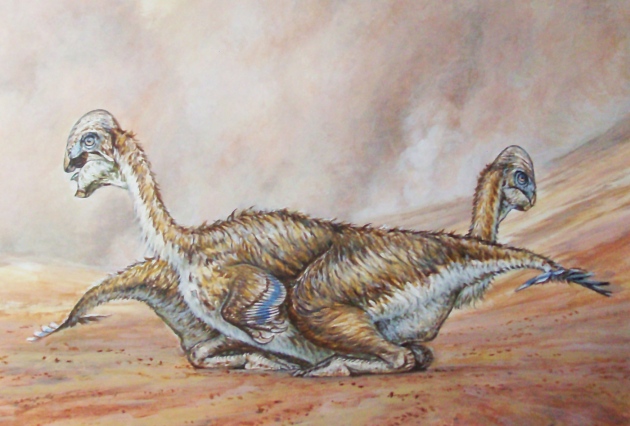 An artist’s impression of roosting oviraptorids.

A female oviraptorid could lay dozens of eggs, always in multiples of two. So the animals might well have been siblings, Funston says, or perhaps cousins.

Two additional Mongolian fossils of the same species help to bracket the age of the sleeping trio. A previously discovered adult from a different bone bed weighed 75 kilograms. Another specimen recovered from poachers in 2006 was 33 kilograms and, judging by its bone development, was probably less than one year old. That led the team to estimate the block animals’ age at 2 to 5 years — making them the equivalent of “teenagers hanging out in the parking lot”, jokes David Varricchio, a vertebrate palaeontologist at Montana State University in Bozeman.

Having specimens of varied ages will bring insights on how this class of animals grew and evolved, says Michael Pittman, a palaeontologist at the University of Hong Kong.

The configuration of the three animals implies they were touching each other, and the researchers think the youngsters were probably huddling for warmth. That suggests that the animals had tried to maintain a constant body temperature, Funston says, even though most animals that huddle for warmth are small. Funston speculates that frigid weather or a sand storm drove the three dinosaurs to nestle together.

Other researchers have reservations about that idea. The animals may have huddled together to hide or merely because the spot was “a great place to sleep”, says John Grady, a biologist at Bryn Mawr College in Pennsylvania who has studied the metabolic rates of dinosaurs. And Varricchio wonders whether the young reptiles were resting or taking shelter from harsh conditions rather than sleeping.

But Funston argues that modern animals that roost together don’t usually make direct contact except for warmth. Animals that died in events such as floods are preserved in very different stances from that of the oviraptorid trio, he says, making it unlikely that the young dinosaurs were awake.

Whatever the three fossilized dinosaurs were doing, researchers say that their remains suggest that young oviraptorids were social animals. There is fossil evidence of adult oviraptorids sitting on nests, and it makes sense that the young “should be palling around” rather than getting in the adults’ way, Varricchio says. The life-like pose of the fossils in the block, he adds, shows “they were alive together and they perished together”.