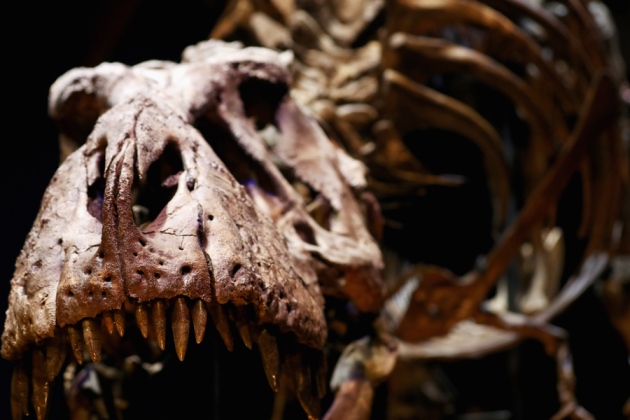 Tyrannosaurus rex may be closer kin with bird-hipped dinosaurs such as Stegosaurus than was previously thought.

The longstanding division of dinosaurs into 'bird-hipped' species including Stegosaurus and their 'lizard-hipped' counterparts such as Brachiosaurus and Tyrannosaurus rex may no longer be valid, a study published on 22 March in Nature contends1. Among the other proposed changes to the dinosaur family tree, the long-necked herbivorous and often gargantuan sauropods such as Brachiosaurus are no longer as closely related to bipedal, meat-eating theropods such as T. rex as they were under previous schemes.

“This is a textbook changer — if it continues to pan out,” says Thomas Holtz, a vertebrate palaeontologist at the University of Maryland in College Park. “It’s only one analysis, but it’s a thorough one.”

The new study assesses kinship among 74 dinosaur species that span the family tree, on the basis of similarities or differences in more than 450 anatomical features, says Matthew Baron, a vertebrate palaeontologist at the University of Cambridge, UK, who led the study.

Most of the species considered in the analysis lived within the first 100 million years of  dinosaurs' reign. The oldest known dinosaur fossil dates from about 243 million years ago, and the last dinosaurs — along with myriad other creatures — died en masse around 66 million years ago, leaving the birds as their only descendants, after an asteroid slammed into the sea just north of what is now Mexico’s Yucatán Peninsula.

Baron and his colleagues’ most notable revision grafts the theropod lizard-hipped lineage onto the branch containing all of the bird-hipped (ornithiscian) dinosaurs, such as Stegosaurus and Triceratops. The team’s analysis indicates that members of both major groups share 21 anatomical traits, ranging from a distinctive ridge on their upper jaw to the fusion of particular bones in their feet. For this newly amalgamated branch of the family tree, the team resurrected a group name that was first proposed in the 1870s but later fell out of favour — the Ornithoscelida, which loosely translated from Greek means 'bird-limbed'.

Besides upending decades of accepted wisdom about the relations among various dinosaur lineages, the new study hints that the first dinosaurs might have appeared around 247 million years ago, slightly earlier than previously suspected. They may also have originated in what is now North America, rather than in Gondwana — the southern portion of the supercontinent Pangaea — which was presumed to have been the dinosaur cradle. 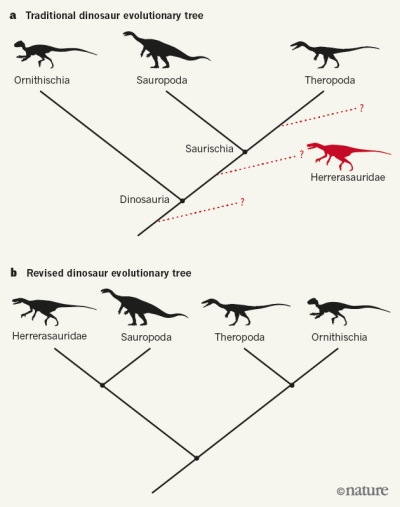 The dinosaur family tree is traditionally divided into ‘bird-hipped’ (Ornithischia) and ‘lizard-hipped’ (Saurischia) lineages, with an early group of carnivorous dinosaurs, Herrerasauridae, branching off at various places in the family tree. Under the newly proposed regime, theropods such as T. rex are now grouped with bird-hipped dinosaurs such as Stegosaurus.

In an accompanying News & Views article2, Kevin Padian, a vertebrate palaeontologist at the University of California, Berkeley, calls the team’s findings an “original and provocative reassessment of dinosaur origins and relationships”. And because Baron and his colleagues used well-accepted methods, he notes, the results can’t simply be dismissed as a different opinion or as mere speculation. “This will send people back to the drawing board,” he added in an interview.

Hans-Dieter Sues, a vertebrate palaeontologist at the Smithsonian Institution’s National Museum of Natural History in Washington DC, says the study should stoke discussion. “But I caution against totally reorganizing the dinosaur family tree just yet," he says. For one thing, palaeontologists’ analyses of relations among species are keenly sensitive to which species are considered, as well as which and how many anatomical features are included, he says.

The discovery of new dinosaur species or more complete specimens of those already known might also drive future analyses back toward more currently accepted arrangements of dinosaur lineages, Sues says. In recent years, South America has yielded a flurry of new dinosaur discoveries. And, he says, North American rocks laid down during the dinosaurs’ earliest days have yet to be explored as thoroughly as South American rocks of the same age.

“For many regions of the world, there’s so much we don’t know about the fossil record,” he notes.