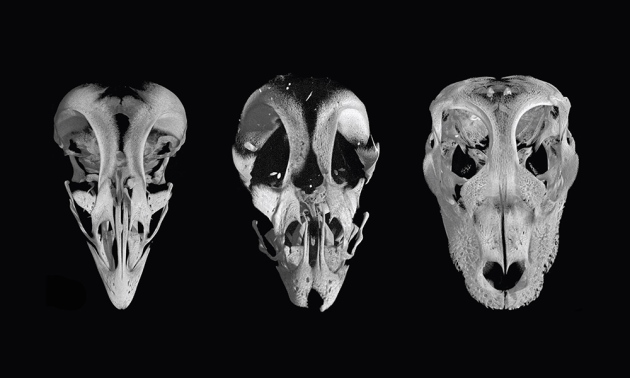 The skull of a chicken embryo ready to hatch usually has a beak (left), but when certain proteins are blocked (middle) develops a reptilian 'snout'  from two bones, rather like a modern-day alligator (right).

Biologists have created chicken embryos with dinosaur-like faces by tinkering with the molecules that build the birds' beaks.

The research, details of which are published today in Evolution1, does not aim to engineer flocks of hybrid ‘dino-chickens’ or to resurrect dinosaurs, says Bhart-Anjan Bhullar, a palaeontologist now at the University of Chicago in Illinois, who co-led the work. “We’re never going back to the actual dino-chicken or whatever it is.” Rather, he says, the team wants to determine how snouts might have turned into beaks as dinosaurs evolved into birds more than 150 million years ago.

The transition from dinosaur to bird was messy — no specific anatomical features distinguished the first birds from their meat-eating dinosaur ancestors. But in the early stages of bird evolution, the twin bones that formed the snout in dinosaurs and reptiles — called the premaxilla — grew longer and joined together to produce what is now the beak. “Instead of two little bones on the sides of snout, like all other vertebrates, it was fused into a single structure,” Bhullar says.

To better understand how these bones might have become fused, a team led by Bhullar and Arhat Abzhanov, an evolutionary biologist at Harvard University in Cambridge, Massachusetts, analysed the embryonic development of beaks in chickens and emus, and of snouts in alligators, lizards and turtles. They reasoned that reptile and dinosaur snouts develop from premaxilla in a similar way, and that the developmental pathways that form the snout were altered in the course of bird evolution.

The team found that two proteins known to orchestrate the development of the face, FGF and Wnt, were expressed differently in bird and reptile embryos. In reptiles, the proteins were active in two small areas in the part of the embryo that turns into the face. In birds, by contrast, both proteins were expressed in a large band across the same region in the embryo. Bhullar sees the result as tentative evidence that altered FGF and Wnt activity contributed to the evolution of the beak.

To test this idea, the team added biochemicals to block the activity of both proteins in dozens of developing chicken eggs. The researchers did not actually hatch the eggs, says Bhullar, because they did not write that step into their approved research protocol. Instead, they discerned differences in the faces of ready-to-hatch chicks, which looked subtly different from chicks without their proteins inhibited. The altered chicks still had a flap of skin over their would-be beaks, so the difference is not obvious, says Bhullar. “Looking at these animals externally, you would still think it’s a beak. But if you saw the skeleton, you’d just be very confused," he says. "I would not say we gave birds snouts.”

In some embryos, the premaxillae were partly fused, whereas in others the two bones were distinct and much shorter; some of the altered embryos did not look all that different from those of regular chickens. The team created digital models of their skulls with a computed tomography scanner and found that some of these more closely resembled the bones of early birds such as Archaeopteryx and dinosaurs such as Velociraptor, than unmodified chickens.

“Very cool,” says Clifford Tabin, a developmental biologist at Harvard Medical School in Boston, Massachusetts. He thinks that Bhullar’s team makes a strong case that altered expression of FGF and Wnt shaped the bird's beak. Identifying the genetic changes responsible, however, will prove much more difficult. They could lie in the genes coding for FGF and Wnt, or to genes in related biochemical pathways, or in ‘regulatory’ DNA that influences gene expression. If these changes could be identified, it might be possible to modify chicken genomes to include them (and, conversely, to make reptiles more bird-like through genome editing).

Jack Horner, a palaeontologist at Montana State University in Bozeman, hopes to take a genetic approach to imbuing chickens with dinosaur-like tails. In a paper published last year2, his team identified mutations potentially involved in the disappearance of the tail in modern birds. But applying these insights to engineering ‘dino-chickens’ has proved difficult, he says. “We’re having a little more trouble with the tail. There are so many components.” Other anatomical features could be altered by tinkering with development proteins, Horner adds. “It gives us a lot of opportunities to think about making new kinds of animals.”

Bhullar says that he admires Horner’s vision, but he is more interested in replaying evolution to reveal how it creates new forms. His lab plans to study the expansion of the mammalian skull and the unusual lower limbs of crocodiles by resurrecting ancient anatomy. “I think it will open as big a window as you could possibly get into the deep past without having a time machine,” he says.