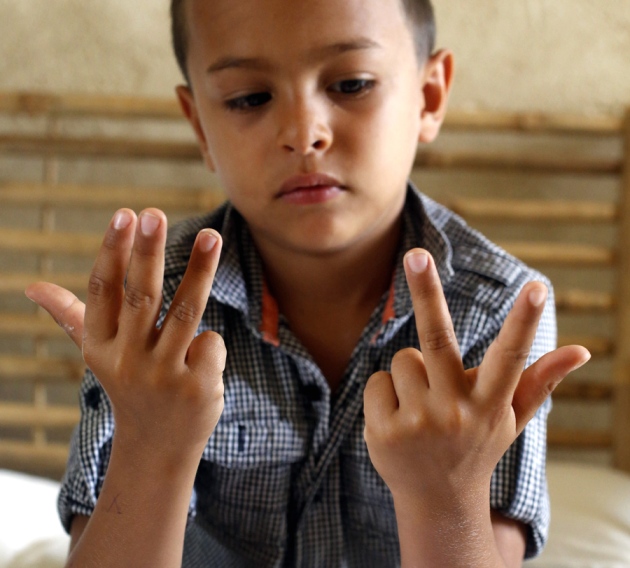 For most adults, adding small numbers requires little effort, but for some children, it can take all ten fingers and a lot of time.

Research published online on 17 August in Nature Neuroscience1 suggests that changes in the hippocampus — a brain area associated with memory formation — could help to explain how children eventually pick up efficient strategies for mathematics, and why some children learn more quickly than others.

Vinod Menon, a developmental cognitive neuroscientist at Stanford University in California, and his colleagues presented single-digit addition problems to 28 children aged 7–9, as well as to 20 adolescents aged 14–17 and 20 young adults. Consistent with previous psychology studies2, the children relied heavily on counting out the sums, whereas adolescents and adults tended to draw on memorized information to calculate the answers.

The researchers saw this developmental change begin to unfold when they tested the same children at two time points, about one year apart. As the children aged, they began to move away from counting on fingers towards memory-based strategies, as measured by their own accounts and by decreased lip and finger movements during the task.

Using functional magnetic resonance imaging (fMRI) to scan the children's brains, the team observed increased activation of the hippocampus between the first and second time point. Neural activation decreased in parts of the prefrontal and parietal cortices known to be involved in counting, suggesting that the same calculations had begun to engage different neural circuits.

"This paper is really a very novel contribution," says Daniel Ansari, a developmental cognitive neuroscientist at Western University in London, Ontario. "We've known for a long time that there's this developmental shift in strategy, but we've known very little about the fundamental underlying mechanism."

Few previous fMRI studies have followed children at multiple time points — in part because many youngsters have trouble staying still for the duration of a brain scan.

Despite measuring an initial increase in hippocampal activation in children, Menon's team found that the strength of neural signalling was not itself the key to mathematical aptitude. In fact, addition problems appeared to engage the hippocampus less in adolescents and adults than in children.

Instead, coordination of signals in the hippocampus with activity in the rest of the brain seemed most important, particularly with activity in the neocortex, which is involved in long-term memory storage. Children with stronger connections between the hippocampus and neocortex were more likely than others to answer problems with memorized maths facts.

The findings provide strong empirical support for existing theories of maths development, says Jessica Cantlon, a cognitive neuroscientist at the University of Rochester in New York. But, she adds, "We don't know what information is being passed between the hippocampus and the neocortex." One way to probe this question, she says, would be to extend the study to children with hippocampal damage or mathematical learning impairments.

Menon suggests that maturation of the hippocampus and its connections probably underlies not only the development of memory-based maths skills in children, but also some other types of learning. "We think this is a general principle, but obviously there is a lot more work to be done," he says.