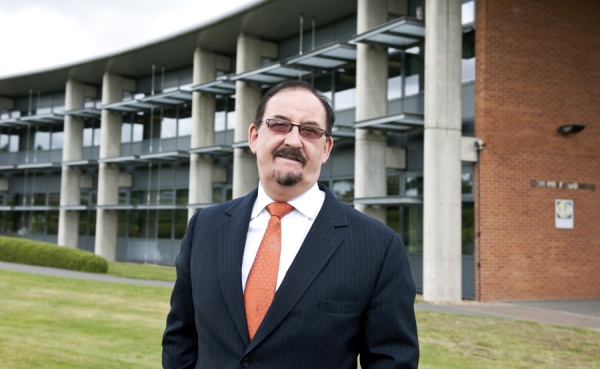 Maurice Moloney in front of the Centenary building at Rothamsted Research in Harpenden, UK.

Maurice Moloney has led Rothamsted Research in Harpenden, UK, probably the oldest agricultural-science centre in the world, since 2010. But at the end of November he is scheduled to move to Australia to take charge of food, health and life sciences at the Commonwealth Scientific and Industrial Research Organisation in Australia. Moloney spoke to Nature about his time in the United Kingdom.

How did you come to head Rothamsted Research?

I was over in Canada and I was running a biotechnology company. Then I got an e-mail from headhunters working on behalf of Rothamsted. Of the various things that one would do in life, if asked to, when you’re a plant biologist you’re not going to turn down Rothamsted.

How does Rothamsted differ from a university centre, for example?

The first thing to say is that as a scientist, I would defend very strongly the idea that we should invest in research that is motivated entirely by curiosity around nature. And we’ve got many, many examples of things that started out as curiosity-based research programmes and turned out to be highly applicable — and often multibillion-pound programmes.

At a research institute the one advantage we have over a university is the longevity of funding and the ability to invest in the longer term towards outcome-based objectives. I refer to that as vectoral science, rather than scalar science. Scalar science has a magnitude — it’s important. Vectoral science has magnitude and direction. And that’s really the job of research institutes — not just Rothamsted, but institutes the world over.

And what is the job of Rothamsted specifically?

We fill a unique niche in world agriculture. Our mission is to be a world-leading centre of crop science and soil science, devoted to sustainable agriculture. So those are the key pillars.

What are some of your favourite projects from your time at Rothamsted?

There’s lots of stuff. Our chemical ecology group — which is led by chemist John Pickett — is world leading. The idea of introducing aphid alarm pheromones into wheat to protect it against aphid attack — that comes out of that group.

The spatial ecologists have done remarkable work on monitoring the movement of a whole range of insects using horizontal and vertical radar to follow migration paths. That’s actually groundbreaking because although we know quite a lot about bird migration, we know almost nothing about insect migration. Jason Chapman’s group has demonstrated there’s a lot more to insect migration than simply following the wind.

The other area that is outstanding is the lipid-biochemistry work of Johnathan Napier. His group has done fantastic fundamental work in plant lipid biochemistry. One of the key outcomes has been to develop terrestrial oilseeds that produce fish oils. We’ve mobilized the genes from algae that make some of these oils and put them into oilseed crops. And sure enough, we’ve been able to make oils that are as good as — in some cases even better than — fish oils.

Rothamsted has been heavily associated with genetically modified (GM) crops in the public mind. Did you make a conscious decision to get involved in that debate?

We were as transparent as we could be, because we weren’t looking for conflict. We did all the risk assessments; we did all the things you have to do to get permission to go outside. And we did.

The field trial of wheat that produces the aphid alarm pheromone attracted protests. What was your reaction?

There was a bit of a backlash [See 'Rothamsted trial attacked']. It was a much more noisy backlash than you would have imagined with the relatively few people involved, but it was a well-orchestrated campaign, as these things often are. We had to respond to it, and we responded to it as logically as we could.

We invited these people to public debates, which they declined, because they know the arguments we were making were very compelling. This wasn’t a commercial field trial. It wasn’t done in concert with all their favourite, detested large companies. It was a field trial that, if it worked, would give enormous ecological benefit, because it would avoid using insecticides in widespread spraying.

Are you sad about leaving Rothamsted?

Definitely. I’m very emotional about it, to be honest. I’m extremely fond of Rothamsted and the people. Having said that, I think the good ship Rothamsted is on a very good course.