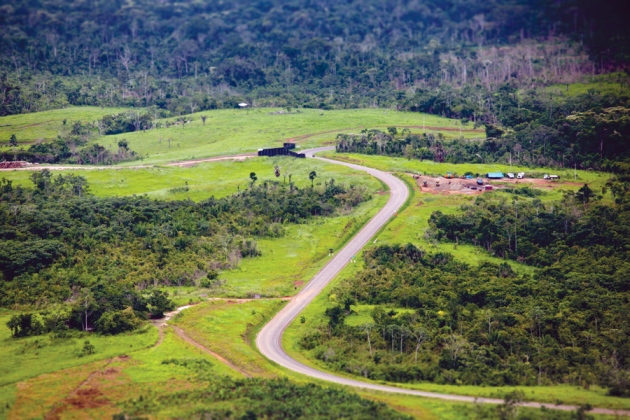 The Interoceanic Highway has spurred deforestation in the Peruvian Amazon.

Next to a newly paved highway in the Peruvian Amazon, a discreet white-on-green sign urges travellers to protect the surrounding ecosystem. “Let's care for the environment, let's conserve the forest,” it reads. But the appeal comes too late for this spot in the region known as Madre de Dios. Before the route was paved a few years ago, tall trees lined the roadside, but the forest edge here now lies about half a kilometre away, beyond a jumble of underbrush and freshly cut trees where a cattle pasture was recently carved out of the woods.

As drivers head east and enter Brazil, the view is much the same for hundreds of kilometres. Such is the impact of the Interoceanic Highway, a route some 5,500 kilometres long that cuts clear across South America.

The highway is just one strand in a web of roads that now criss-cross the Amazon. So far, most have encroached on forest around the edges of the basin, but they are increasingly slicing through the middle. In Brazil alone, the Amazon road system grew by an average of almost 17,000 kilometres a year between 2004 and 2007 (ref. 1). Across the basin, estimates for the total length of roads vary widely from about 100,000 to 190,000 kilometres of paved and dirt roads cutting through the Amazon.

Once construction begins, road crews are quickly followed by land speculators, loggers, farmers, ranchers, gold miners and others who carve away the forest along the route. That activity leaves obvious scars on the landscape in the form of treeless expanses, but research is now showing that the building of roads also triggers a cascade of environmental changes in the remaining forest that can dry out trees, set the stage for wildfires and weaken the ecosystem.

“Put a road into a frontier area and it opens a Pandora's box,” says biologist William Laurance of the Centre for Tropical Environmental & Sustainability Science at James Cook University in Cairns, Australia.

The drying brought about by roads influences local atmospheric circulation patterns and can have farther-reaching effects that not only compromise the health of the Amazon but can also contribute to global warming by releasing carbon stored in the forest. Understanding those details is crucial, researchers say, for determining whether these effects — combined with severe droughts such as those that struck parts of the Amazon basin in 2005, 2007 and 2010 — could tip the world's largest expanse of tropical forest from being a net absorber of carbon dioxide to a net emitter2.

It was a road that kicked off the pattern of destruction in the Amazon forest. In the 1970s, Brazil began building the Trans-Amazonian Highway from near the country's easternmost point on the Atlantic coast to its western border, where the state of Amazonas meets Peru. The route opened up the heart of the Amazon to logging, ranching and settlement, causing deforestation rates to soar. Extreme spells in the 1990s and early 2000s claimed more than 25,000 square kilometres a year — an area bigger than New Jersey. Since 2005, government measures, including crackdowns on illegal logging, have slowed forest loss. Throughout, roads have provided the means to penetrate the forest and erase large chunks of it. In an unpublished study of the Brazilian Amazon, Christopher Barber, a researcher at South Dakota State University in Brookings, found that 95% of deforestation in the region occurs within 7 kilometres of a road. And that is not the only problem: just as serious as outright deforestation is fragmentation, which happens when loggers, ranchers and farmers move in. In Brazil, up to 38,000 kilometres of new forest edge are created each year3. 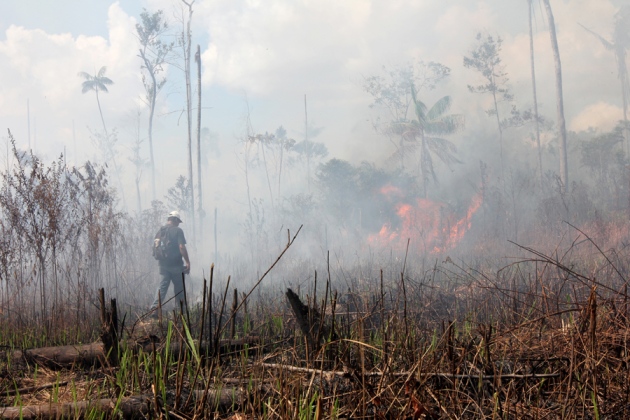 Roads cause drying within the forest, making them more susceptible to burning.

Standing in a field in the western Brazilian state of Mato Grosso, Michael Coe can feel the difference that deforestation makes in the Amazon. An atmospheric scientist who heads the Amazon programme of the Woods Hole Research Center in Falmouth, Massachusetts, Coe is visiting an 80,000-hectare patch of former forest that was originally cleared some years ago to build a cattle ranch, which later morphed into a soya-bean farm. The air is noticeably hotter and drier in the field than in one of the few patches of forest left on the farm.

Coe and his colleagues are here to study how forest degradation and fires alter the flow of water and energy in the Amazon ecosystem. Evapotranspiration from trees provides moisture to the air and feeds much of the precipitation in the Amazon: when the trees disappear, so does a major source of moisture. A study using satellite data and models of atmospheric circulation suggests that air passing over tropical regions rich in vegetation produces at least twice as much rain as air moving over areas with little vegetation4.

Stripping away trees not only eliminates a source of moisture; it also changes the regional air flow. Heat rising from a bare field creates a low-pressure system that pulls in air from the surrounding area, sucking moisture out of the nearby forest, says Coe.

“We're looking at a tidal wave of road expansion happening in the next few decades.”

As the forest dries, it transfers less moisture to the atmosphere, changing rainfall patterns hundreds or thousands of kilometres downwind. That could affect not only forests and agriculture across the basin, but also the amount of water available to power hydroelectric dams. In a simulation using climate, hydrological and land-use models, Coe and his colleagues projected that reductions in rainfall caused by deforestation could drastically cut the power-generating capacity of Amazonian dams5. That would upset the plans of Brazil, Peru and Ecuador, which intend to increase hydropower to meet rapidly growing electricity demands.

The drying effect reaches well past the forest's edge. And the more fragmented the forest, the wider the impact, according to one study that found canopy drying 2.7 kilometres from the edge of a highly fragmented forest6.

The influence of roads in the Amazon could even reach around the world. Recent lines of research suggest that changes in several factors prevent trees in disrupted forests from storing as much carbon as they did in the past, a shift that could accelerate global warming.

Greg Asner, a tropical ecologist at the Carnegie Institution for Science at Stanford University in California, studies the chemistry of the tree canopy in the Amazon using ground plots and airborne spectrometers. He is finding that the forest canopy along the edges of open patches does not seem to hold as much water or pigment, such as chlorophyll, as trees in unbroken parts of the forest. “Not enough chlorophyll and not enough water keep the canopy from soaking up carbon dioxide at the rate that we know it can, compared to the more interior forest,” he says. 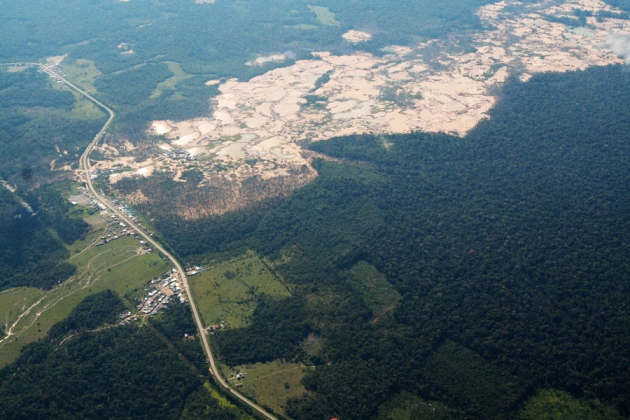 Patches of cleared land border the Interoceanic Highway as it runs through the Amazon.

Changes in the Amazon's fire potential are also impeding the forest's ability to store carbon. Conventional wisdom has long held that the rainforest was too humid to burn. But in 2005, when drought struck the western Amazon, wildfires in the Brazilian state of Acre merged into a line 11 kilometres long, with flames leaping to canopy height, recalls Foster Brown, an environmental geochemist at the Woods Hole Research Center who witnessed the fires.

The flames damaged more than a quarter of a million hectares of forest in that state alone and caused US$100 million in damages. Smoke blanketed Rio Branco, the state capital, and public-health concerns finally led to ordinances to control burning during times of drought.

Scientists considered the 2005 drought to be a once-in-a-century event; some 70 million hectares of forest suffered water stress7, and there was significant drying within the tree canopy. But five years later, a similar dry spell struck, triggering another extreme bout of fires. Because they have not evolved in an environment frequently beset by fires, trees in the Amazon forest are susceptible to heat and damage from flames.

Farther east, in Brazil's Xingu region, researchers saw similar results from experimental fires during a drought in 2007. Tree mortality from heat and fire damage that year was more than four times that of a normal year8, especially along the forest edge, which the researchers burn every three years in a cycle emulating traditional Amazonian agricultural practices, says ecologist Paulo Monteiro Brando of Brazil's Amazon Environmental Research Institute in Brasília. In the Amazon, burning is the cheapest and most effective way for farmers to clear fields and give them a nutrient boost before planting crops, or rid them of ticks that plague livestock.

Understanding the future of the Amazon means learning how to model not just physical and atmospheric processes, but also how humans are changing the land, researchers say.

And as the wider impact of Amazonian roads becomes clearer, planners and conservationists face a dilemma. Although roads threaten the forest's health, they also significantly lower costs for farmers and businesses, and can make a difference between life and death for people in remote areas far from hospitals.

But unrestricted road building could lead to irreparable environmental harm, say researchers. “We're looking at a tidal wave of road expansion happening in the next few decades,” Laurance says. “It's ecological Armageddon, and it's happening again and again.”