Landslides claim an order of magnitude more lives each year than has been previously recognized, a study reports. Yet this annual toll of several thousand deaths worldwide may still underestimate the long-term average.

Although landslides, rockfalls and other 'debris flows' are common, the number of lives lost to them has been poorly quantified. This is mainly because databases tend to classify relevant fatalities as caused by the earthquake or weather event that triggered the landslide, rather than the landslide itself. 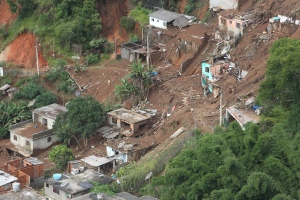 Landslides killed dozens of people in Brazil in January 2011.

But David Petley, a geographer at the International Landslide Centre at Durham University, UK, has compiled his own global database using government statistics, aid-agency reports and research papers. Writing in Geology1, he reports that between 2004 and 2010, 2,620 fatal landslides killed a total of 32,322 people. That figure excludes landslides triggered by earthquakes, and comes in at a little more than half the total number of people killed by floods, which claimed more than 7,600 lives annually between 1990 and 2006. Wildfires, by comparison, slayed 47 people per year, on average, between those dates.

“These results are astounding in terms of the numbers of people dying from landslides,” says Rex Baum, a geologist with the US Geological Survey in Denver, Colorado. “This hasn’t been well documented on a global scale previously.”

Petley reports that landslides tend to occur during the Northern Hemisphere summer and autumn, when monsoons strike eastern and southern Asia and hurricanes and typhoons slam Central America, islands of the Caribbean and land bordering the northwestern Pacific Ocean.

In general, says Petley, fatalities happen where slopes are steep, there is plentiful rainfall for at least part of the year, and populations are dense. Although this combination of factors is unsurprising, it hasn’t previously been shown statistically, says Dalia Kirschbaum, a geoscientist at NASA’s Goddard Space Flight Center in Greenbelt, Maryland.

Despite the large numbers, the results are probably underestimates of long-term averages. Several regions purportedly prone to landslides, such as North Korea and Ethiopia, report few of the events that actually happen. Furthermore, many people who die from landslide-caused injuries long after the event itself are not included in final death tallies. And finally, the interval that Petley studied did not contain an extended El Niño — a climate pattern that usually increases the number of hurricanes striking the Caribbean and Central America, and can therefore dramatically boost occurrences of fatal landslides.

The data set doesn't cover enough years to be useful for making predictions, but it does hint that the frequency of landslides is rising.

“It’s certainly true that there are opportunities for future increases in fatalities,” says Baum. Populations in affected areas are growing and encroaching on deforested land that is prone to landslides. But without long-term data, he notes, it is hard to estimate just how high the death toll could mount.