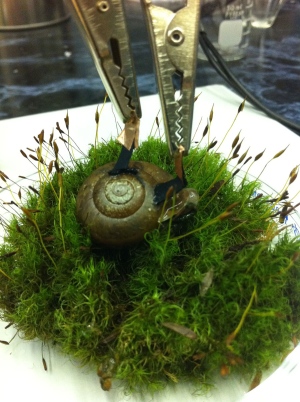 Snails have joined the growing ranks of animals whose own metabolism can be used to generate electricity.

The dozen or so brown garden snails crawling around the plastic, moss-filled terrarium in Evgeny Katz’s laboratory look normal, but they have a hidden superpower: they produce electricity.

Into each mollusc, Katz and his team at Clarkson University in Potsdam, New York, have implanted tiny biofuel cells that extract electrical power from the glucose and oxygen in the snail’s blood. Munching mainly on carrots, the cyborg snails live for around half a year and generate electricity whenever their implanted electrodes are hooked up to an external circuit. “The animals are quite fit — they eat, drink and crawl. We take care to keep them alive and happy,” Katz says.

Snails are just one of several living creatures to have been ‘electrified’ like this. Katz’s research, reported last week in the Journal of the American Chemical Society1, comes hot on the heels of a January paper in the same journal from researchers led by Daniel Scherson at Case Western Reserve University in Cleveland, Ohio, who have implanted biofuel cells into live cockroaches2. And in work yet to be published, Sameer Singhal, who directs a team working on biomedical and energy technology at CFD Research Corporation in Huntsville, Alabama, together with researchers at the University of California, Berkeley, reports implanting biofuel cells into beetles. The insects survived the process and generated power for more than two weeks, the scientists say.

All of these efforts are aimed at helping to create insect (or snail) cyborgs, a concept that has attracted funding from the US Department of Defense. For at least a decade, researchers have been creating battery-powered microcircuits with sensors and radio antennae and implanting them into various bugs and creepy-crawlies so that the creatures could gather information about their surroundings for environmental monitoring or military purposes3.

But batteries might be too bulky and short-lived to power prolonged missions — which is where the idea of tapping into the creatures’ own metabolism comes in. Katz has shown that in snails, biofuel cells could provide a steady dribble of power for months. “The truly impressive portion of [Katz’s] work is that the implantation provides such stable potential for such a long period of time,” says Shelley Minteer, who works on biofuel cells at the University of Utah in Salt Lake City.

Although very large biofuel cells can power mobile phones and other devices, it’s doubtful that the tiny, few-centimetre-sized cells in living creatures could self-power complicated actions — such as, for example, remote-controlled flight — points out Plamen Atanassov, a fuel cell expert who directs the Center for Emerging Energy Technologies at the University of New Mexico in Albuquerque.

In living creatures, the rate at which biofuel cells can extract energy — and, therefore, the amount of power they can provide — is limited by their electrodes’ size, and also by how quickly sugar and oxygen can be taken from the creatures' blood (or in the snails' case, not blood, but a related fluid known as haemolymph).

Katz’s snails, for example, produced up to 7.45 microwatts, but after 45 minutes, that power had decreased by 80%. To draw continuous power, Katz’s team had to ramp down the power they extracted to 0.16 microwatts.

Scherson says that he thinks he will be able to get a few hundred microwatts out of cockroaches (his biofuel cells feed on trehalose, a different sugar from glucose). Singhal reports similar results for beetles. Scherson, who is working with a large company to build microelectronics circuits for his cockroaches, points out that power need not be drawn continuously, but could be stored up in capacitors and released in pulses; he has already been able to produce and detect a radio signal from the cockroaches this way, he says.

Philippe Cinquin at the Joseph Fourier University in Grenoble, France, and his colleagues are taking biofuel cells in a different direction — implanting them into rats. Their work4, published in 2010, marked the first steps towards using biocompatible fuel cells in humans so that our own blood supply could run low-power medical devices such as pacemakers.

In these cases, the fuel cells must come with biocompatible membranes that ensure the implants aren’t rejected by the body, points out Cinquin. His team has already launched a company to develop artificial urinary sphincters, which require 300–500 microwatts of power and so could draw on glucose fuel from the body. Of course, batteries already exist for such applications — but smaller biofuel cells might, in theory, provide a more convenient, long-lasting way of powering such devices.

Adam Heller, a chemical engineer at the University of Texas at Austin, whose 2003 work kick-started much of the enthusiasm by showing how biofuel cells could generate power from a grape5, says that implantable biofuel cells might be useful for low-power, low-energy applications such as stimulating single nerves. But, he cautions, these applications may be a generation away.

Meanwhile, Katz says that he aims to move on to animals larger than snails, as their metabolism will provide more power. Next up for him: cyborg lobsters.