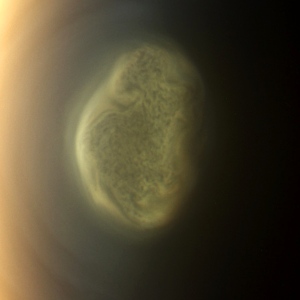 A high-altitude cloud that appeared above Titan two years ago is causing planetary scientists to rethink Saturn’s most intriguing moon. Research now shows that the cloud is made of hydrogen cyanide ice, whose very existence, 300 kilometres above Titan’s surface, suggests that the air above its south pole is a lot colder than anyone had suspected.

“This is telling us that you have to expect the unexpected, even on ‘planets’ that we thought we knew relatively well,” says Remco de Kok, a planetary scientist at Leiden University in the Netherlands, who led the study. The work appears in the 2 October Nature1.

The discovery is upending some ideas about weather patterns on Titan, and may even suggest different ways to think about weather on early Earth, whose atmosphere had more methane and other hydrocarbons than it does today.

When the cloud first appeared above Titan’s south pole in May 2012, researchers were not surprised. After all, Titan’s southern hemisphere has been moving into winter, so that its temperature is dropping and gases are more likely to freeze in the atmosphere. Scientists had seen a similar cloud above Titan’s north pole a decade ago, when the northern hemisphere was experiencing winter.

But after hearing a talk on the southern polar cloud last year, de Kok decided to see whether he could tease out what the cloud was made of. He and his team looked at data gathered by the infrared spectrometer on NASA’s Cassini mission, and spotted several features in the cloud’s infrared spectrum that did not exist in the cloudless parts of Titan’s atmosphere.

From several possible options, the researchers concluded that those features were produced by hydrogen cyanide ice. Hydrogen cyanide is just one of the many kinds of hydrocarbons that circulate between Titan’s atmosphere and its surface, raining out and forming lakes rich in molecules such as methane and ethane.

But de Kok's team also studied the rotating cloud from edge-on, and estimated that it floated about 300 kilometres above the surface, far higher than expected. When the European Space Agency's Huygens probe plummeted through Titan's atmosphere in 2005, it measured hints of hydrogen cyanide ice much lower down, at around 90 kilometres, de Kok says.

If a cyanide cloud really does lurk 300 kilometres above Titan, then the temperature there must be about 100 Celsius colder than predicted. And it must have dropped quickly — three months before de Kok’s team took their data, Cassini measured the cloud’s temperature and found it too warm for hydrogen cyanide to condense.

Titan's south pole seems to be losing heat to space more quickly than it is gaining heat from air masses sinking within its atmosphere, de Kok says. Researchers will probably now have to revise their global-circulation models of Titan’s atmosphere, says Sarah Hörst, a planetary scientist at Johns Hopkins University in Baltimore, Maryland. “We are transitioning to this very exciting time where we are able, for the first time, to think about Titan as a dynamic system,” she says. “This is really cool.”

The southern hemisphere of Titan, like that of Saturn, continues to descend into winter as the bodies make their 29-year journey around the Sun. Researchers are watching how the cyanide cloud reacts as seasons change. Since May 2012 it has shifted as it is pummeled by winds of the southern polar vortex.

Cassini is scheduled to take the temperature above Titan’s south pole again in 2015.