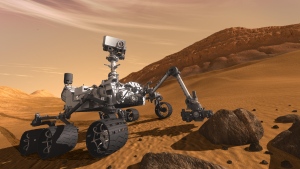 The Curiosity rover has an instrument that could distinguish between biological and non-biological sources of methane on Mars.

Is there methane on Mars? The question has dogged scientists since 1969, when George Pimentel at the University of California, Berkeley, an instrument leader on NASA's Mariner 7 programme, held a press conference to announce that methane had been detected near Mars’ south polar cap. The revelation came less than 48 hours after his team received the data it was based on; he retracted the finding a month later after realizing that the methane signal was actually coming from carbon dioxide ice.

It is easy to understand why scientists are so keen for an answer. Although there are plenty of ways to make trace amounts of methane, levels of more than a few parts per billion would imply the presence of an unexpectedly active source — and raise the possibility that the planet supports methane-producing microbes.

NASA's Curiosity rover is poised to settle the question as early as this week. But the tale of George Pimentel, and a handful of hotly debated methane detections reported over the past decade from orbiting spacecraft and ground-based telescopes, have instilled a sense of caution in the rover science team. “We’re committed to getting this right,” John Grotzinger, the Curiosity project scientist at the California Institute of Technology in Pasadena, told Nature on 17 October, during a meeting of the American Astronomical Society’s Division for Planetary Sciences in Reno, Nevada.

Michael Mumma of NASA's Goddard Space Flight Center in Greenbelt, Maryland, is trying to wait patiently. In 2009, he reported finding seasonal plumes of methane following an analysis of observations made years earlier with telescopes in Hawaii1. In 2003, methane levels in one of the plumes reached 45 parts per billion, but three years later the methane had all but disappeared. Now, Mumma says he has results from 2009–10, gathered using even larger telescopes, that indicate no methane, although the upper limits of his error bars reach 6 parts per billion.

Mumma says the new results don’t worry him, but others suspect that what he saw in 2003 was really a mirage. “He’s not seeing anything now, and that’s a comfort to me,” says Kevin Zahnle of the NASA Ames Research Center in Moffett Field, California, who worked on a critique of recent positive detections2.

Zahnle’s main problem with the observations made by Mumma and others is not the existence of methane, but its extreme variability. Mars has an atmosphere that would quickly mix methane. A disappearing plume implies not only a sudden injection, but also a massive sink. The main method by which methane is destroyed — photochemical dissolution in the atmosphere — yields an average methane lifetime of about 300 years. A disappearing plume would require a lifetime on the order of months. Alternative mechanisms have been proposed to account for this, but they also face problems3. Curiosity is poised to break the stalemate.

The rover’s chief tool for spotting methane is its Tunable Laser Spectrometer (TLS). Several times now, during the Martian night, a valve on the rover has opened and let air into a 20-centimetre-long chamber with a mirror at each end. A mid-infrared laser passes through the gas, and if methane is present it will absorb the laser light at particular frequencies. If the instrument is performing as designed, a single 15-minute test should be sufficient to detect methane levels down to 0.3 parts per billion. By looking at the carbon isotopes that make up the methane, the TLS may also be able to distinguish between biological and non-biological sources.

Even the sceptics say that they would not be surprised if Curiosity sniffed a trace presence of methane, on the order of one to two parts per billion. That’s because there are non-biological ways of maintaining such modest amounts. Comet impacts could leave some methane. Hot water, reacting with olivine-rich rock, creates methane along with the mineral serpentinite. And clathrates, icy lattices that trap gas molecules, could be gradually leaking methane produced in previous geological epochs.

In the first test of the TLS, about three weeks after the rover’s 6 August landing, there was a strong methane signal. But that, it later emerged, was from a separate ‘foreoptics’ cell that the laser shoots through on its way to the mirrored chamber. The cell has not yet lost all of its Earth air, which is comparatively rich in methane. “It was a surprise,” says Grotzinger, who adds that the unexpected result gave the team an additional opportunity to calibrate the instrument.

Since then, the group has been silent on the question of Mars methane. At the Reno meeting, when Mumma stood up to ask Grotzinger about TLS results, the response was blunt. “Stand by.”

Now the wait may finally be over. NASA has announced that Grotzinger’s team will discuss atmospheric measurements at a briefing on 2 November. If the rover has detected methane at sufficiently high concentration, or exhibiting temporal variations of the kind that suggests microbial activity, then it will surely motivate a desire to identify and map the sources. “If it’s there, we really ought to figure it out,” says Philip Christensen, a Mars scientist at Arizona State University in Tempe.

But, when it come to methane on Mars, 'if' has always been the operative word. Just ask George Pimentel.