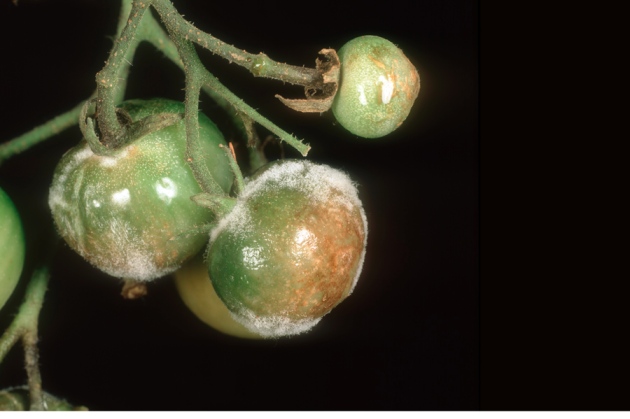 The crop pathogen Phytophthora infestans, which caused the Irish potato famine and is shown here in tomatoes, is still a concern in many countries.

Crop pests and diseases are moving towards the poles at about the same speed as warmer temperatures. The finding suggests that climate change is driving their relocation, and raises major concerns about food security.

Climate change is expected to cause changes in the distributions of species around the world, with an overall shift away from the equator and towards the poles. Ecologists have already documented such a shift in many wild species, including some birds and insects1, 2, 3.

The changing climate is raising major concerns about food security in many countries, and pests may contribute to making matters worse. “Our defences, pesticides and fungicides, are being asked to deal with larger and larger numbers of pests and diseases, each of which can evolve fungicide or pesticide resistance,” says ecologist Dan Bebber of the University of Exeter, UK, who led the new study. Expansion of pest populations into new territories increases the risk that these organisms will escape our control.

Among the biggest threats are fungi and oomycetes, similar but distinct groups of microbes, which cause plant diseases. Several highly virulent strains of fungi have emerged in recent years around the world, and the oomycete Phytophthora infestans remains a persistent problem even 168 years after causing the great Irish potato famine4.

Global movement of crop pests had never been comprehensively analysed. To fill this gap, Bebber and his colleagues made use of historical records held by CABI (formerly known as the Centre for Agricultural Bioscience International), which document crop pests and diseases around the world from 1822 to the present. “No one has looked at any of these datasets. This is the first such analysis,” says co-author Sarah Gurr, a plant pathologist also at Exeter.

Co-author Mark Ramotowski, who did his work as a student at the University of Oxford, UK, narrowed the CABI sample down from over 80,000 records to 26,776, focusing on the period since 1960, when they are ilkely most reliable. For 612 different pest species, the researchers identified the first year in which each was observed in a new country (or region for larger countries) and took that to be the date at which the pest reached that country or region’s average latitude.

The main vulnerability of their study was biases in the data. The group hypothesised that, in the absence of any real trend, pests would appear to be moving towards the equator rather than the poles. This is because wealthier countries have the scientific resources to detect pests earlier than others, and wealthier countries tend to be at higher latitudes. As countries develop and study their pests better, the pests’ range could appear to move into the tropics.

Instead, the team found that, on average, crop pests have been moving towards the poles at 2.7 kilometres per year, which is very close to the rate of climate change5. However, the rate of shift varied significantly for different groups and among individual species. Fungi, beetles, true bugs, mites, butterflies and moths showed clear movements to higher latitudes, whereas viruses and nematode worms shifted to lower latitudes. Other groups showed no detectable change.

“Many studies have shown that climate change is affecting the distribution of wild species populations. This is the first one to show that a similar process is happening in pest species,” says Gurr. She highlights the worrying finding that fungi and oomycetes are moving particularly quickly, at 7 and 6 km per year respectively. Her team's study is published today in Nature Climate Change6.

Chris Thomas, a biologist at the University of York, UK, notes that the overall rate of movement is quite similar to that found in a meta-analysis he led on the movement of wild species1. “My first impression is that it looks like a thorough study.” He notes, as do the authors, that those pest groups seen moving towards the equator — largely nematode worms and viruses are the most poorly understood, and therefore the ones most likely to be discovered later in developing countries.