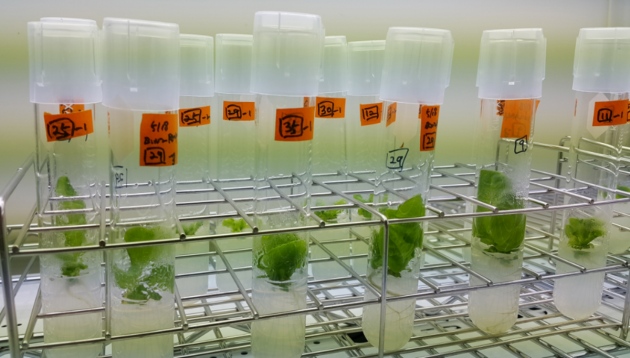 These lettuce-plantlets have had their genomes edited with CRISPR/Cas9, but do not contain foreign DNA.

Plant scientists have been quick to experiment with the popular CRISPR/Cas9 technique, which uses an enzyme called Cas9, guided by two RNA strands, to precisely cut segments of DNA in a genome. By disabling specific genes in wheat and rice, for example, researchers hope to make disease-resistant strains of the crops.

But the process can introduce bits of foreign DNA into plant genomes. And some jurisdictions, such as the European Union, could decide to classify such plants as genetically modified organisms (GMOs)1 — making their acceptance by regulatory bodies contentious, says geneticist Jin-Soo Kim of Seoul National University.

Kim and his team tweaked the technique so that it can delete specific plant genes without introducing foreign DNA, creating plants that he and his colleagues think “might be exempt from current GMO regulations”2.

“In terms of science, our approach is just another improvement in the field of genome editing. However, in terms of regulations and public acceptance, our method could be path-breaking,” says Kim.

Conventionally, researchers get CRISPR/Cas9 working in a plant cell by first shuttling in the gene that codes for the Cas9 enzyme. The gene is introduced on a plasmid — a circular packet of DNA — which is usually carried into a plant by the bacterial pest Agrobacterium tumefaciens. As a result, Agrobacterium DNA can end up in the plant’s genome. Even if the pest is not used, fragments of the Cas9 gene may themselves be incorporated into the plant's genome.

To get around this problem, Kim and his colleagues avoid gene-shuttling altogether. They report a recipe to assemble the Cas9 enzyme together with its guide RNA sequences (which the enzyme requires to find its target) outside the plant, and use solvents to get the resulting protein complex into the plant. The technique works efficiently to knock out selected genes in tobacco plants, rice, lettuce and thale cress, they say, reporting their results in Nature Biotechnology2.

“I think this is a milestone work for plant science,’ says bioethicist Tetsuya Ishii at Hokkaido University in Sapporo, Japan, who has extensively studied the framework of regulation surrounding genetic engineering in plants.

Kim wants to use the technique to edit the banana; the crop's most popular cultivar, the Cavendish variety, is struggling to combat a devastating soil fungus and may go extinct. Gene editing could, for example, be used to knock out the receptor that the fungus uses to invade cells, without any need, in Kim’s view, to classify the resulting banana as a GMO. “We will save the banana so that our children and grandchildren can still enjoy the fruit,” he says.

Other scientists have recently achieved similar results with different genome-editing techniques. Jeffrey Wolt, a specialist in risk analysis of plant biotechnology at Iowa State University in Ames, points out that some researchers have introduced gene-editing protein complexes called TALENs directly into plants, for example3; others have used nanoparticles to usher in different gene-editing proteins4. To his mind, Kim’s paper is just one more tool in plant breeders’ arsenals — although many researchers say that CRISPR is cheaper and easier to use than other tools.

Jens Boch, a plant geneticist at Martin Luther University of Halle-Wittenberg in Germany who helped to develop TALEN, says that he hopes that workarounds that avoid Agrobacterium will not be necessary. When plants reproduce sexually, their genes are remixed, so they produce some offspring that do not have the offending bacterial DNA; breeding these Agrobacterium-free plants should appease regulators, he hopes. Agrobacterium “is just too easy to use, and this is going to be the method of choice”, he says. “I don't believe that plant breeders will use Kim’s method.” (Still, Kim points out that some plants, such as the banana, do not reproduce sexually, so would not lose an Agrobacterium gene if it were lodged in their genome.)

It is unclear what stance regulatory authorities will take on CRISPR-edited plants. The European Commission is currently debating regulations to take into account the latest techniques, and it is conceivable that it will still classify plants as GMOs even if they lack foreign DNA.

In the United States, editing plants with Agrobacterium is currently a trigger for regulation by the Animal and Plant Health Inspection Service, yet plants edited in other ways have bypassed regulations. But rules may change there too: in July, the White House launched a multiyear initiative to review federal regulations on agricultural biotechnology.

If regulations on CRISPR plants do turn out to be severe, Boch says, “the method proposed by Kim is a very good one to circumvent some of the possible criticisms”.