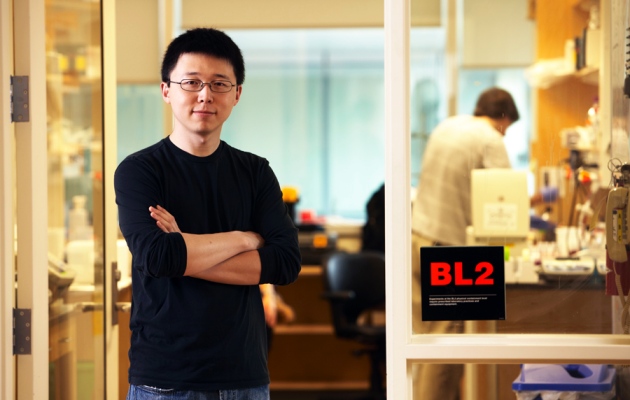 Feng Zhang is one of the founders of Editas Medicine, which aims to use CRISPR gene-editing technology to treat disease.

Instead of taking prescription pills to treat their ailments, patients may one day opt for genetic 'surgery' — using an innovative gene-editing technology to snip out harmful mutations and swap in healthy DNA.

The system, called CRISPR (Clustered Regularly Interspaced Short Palindromic Repeats), has exploded in popularity in the past year, with genetic engineers, neuroscientists and even plant biologists viewing it as a highly efficient and precise research tool. Now, the gene-editing system has spun out a biotechnology company that is attracting attention from investors as well.

Editas Medicine, based in Cambridge, Massachusetts, announced its launch on 25 November with an initial US$43 million venture capital investment. The company, founded by five leading CRISPR researchers, aims to develop therapies that directly modify disease-related genes.

"This is a platform that could have a profound impact on a variety of genetic disorders," says interim president Kevin Bitterman, a venture capitalist at Polaris Partners in Waltham, Massachusetts, which is one of Editas' backers.

CRISPR piggybacks on an immune strategy that bacteria use to detect and chop up foreign DNA. The DNA-cutting enzyme Cas9 finds its target with the help of an RNA guide sequence that researchers can now engineer to home in on potentially any gene of interest.

Editas is not disclosing its intended targets, but the technology might be tried first on diseases caused by a single faulty gene copy, says Feng Zhang, a neuroscientist at the Massachusetts Institute of Technology’s McGovern Institute for Brain Research in Cambridge, Massachusetts, and one of Editas’ founders. Simply disabling the disease-causing copy could clear the way for the good copy to take over. Treating conditions involving two dysfunctional gene copies will require correcting the gene by splicing in healthy DNA — a feat that Zhang says will require more work and engineering.

Conventional gene-therapy approaches have used viruses to deliver DNA — a comparatively imprecise method that can introduce beneficial genes, but not change faulty sequences.

Targeted gene editing, of the kind Editas is attempting, has so far been dominated by one company: Sangamo BioSciences of Richmond, California. Sangamo uses a different system, based on zinc-finger nucleases, to snip and disable genes of interest. Many researchers say that CRISPR is easier to use and customize compared to zinc-finger nucleases, but Sangamo has a healthy head start over Editas. The company's clinical trials are showing encouraging results for using zinc-finger nucleases to disrupt the gene encoding a cell-surface protein that HIV uses to enter immune cells.

"CRISPR has taken the academic world by storm, and it's a very exciting new technology," says Philip Gregory, chief scientific officer of Sangamo. But, he says, there are still several kinks to be resolved, including studies that suggest that Cas9 can make cuts at off-target sites in the genome. Zhang says that his group and others are working on increasing the enzyme's specificity, and have already made some gains.

Eventually, both companies hope to secure the approval the US Food and Drug Administration (FDA). "The FDA has never approved a gene therapy product," says Nicholas Bishop, a biotechnology analyst at Cowen and Company in New York. The field has been slow to recover from a few high-profile, deadly failures of early virus-based gene therapy trials. But these days, says Bishop, "the regulatory climate is thawing considerably."