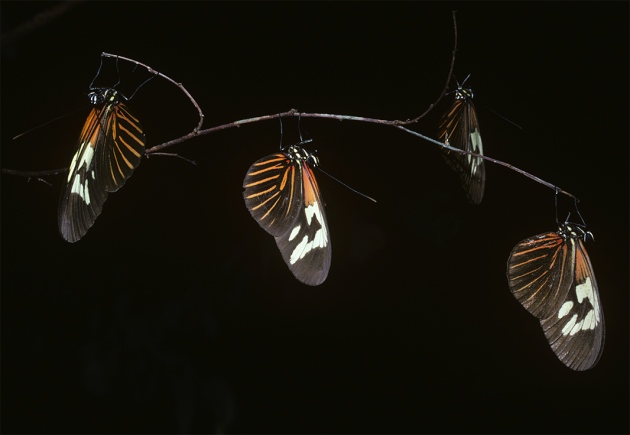 Two genes appear to control the patterns and colours of butterfly wings, including those of the red postman (Heliconius erato).

The brilliant, intricate patterns on butterfly wings — from haunting eye spots to iridescent splashes of blue — look as if they were painted on by teams of artists. Researchers thought that a complex collection of genes might be responsible, interacting to build up the final pattern. But two studies now suggest that two genes play an outsize role in determining the wing’s lines and colours. Turning off these 'master' genes disrupts the canvas, dulling the colours or turning the insects monochromatic.

The studies published this week in Proceedings of the National Academy of Sciences1, 2, challenge the old paradigm of wing-pattern development, says Bob Reed, an evolutionary developmental biologist at Cornell University in Ithaca, New York, and lead author of one of the papers2 and a co-author on the other1. Understanding how wing patterns are controlled gives scientists greater insight into the evolution of traits that help the insects to avoid predation and attract mates.

“The two different genes are complementary. They are painting genes specialized, in a way, for making patterns,” says Arnaud Martin, a developmental biologist at George Washington University in Washington DC, and lead author of one of the studies1.

“This is a visually compelling illustration of the power of genetic studies,” says Rodolphe Barrangou, a microbiologist at North Carolina State University in Raleigh. “Everyone can relate to butterflies, and this literally illustrates how altering genomes with CRISPR can provide insights into biology.”

Previous studies that used conventional genetic mapping and knock-out genes showed that WntA and optix are involved in wing-pattern development. The work showed that the two genes are ‘adaptive hotspots’, because they are linked to physical changes in the organism that appear to be adaptations to their environment.

The researchers used the CRISPR–Cas9 technique to tinker with WntA and optix in several butterfly species. Scientists switched each of the genes on and off to demonstrate how much influence they had over what appeared on the butterflies’ wings.

The new WntA study1 involved seven species of butterfly, including the charismatic monarch butterfly (Danaus plexippus). In most species, when WntA was switched off, colours bled, patterns faded or markings disappeared. In the monarchs, for example, deep-black contouring at the wings’ edges lightened to grey. WntA sets borders and boundaries, says Martin. “It’s laying the background to be filled in later. Like colour by numbers or paint by numbers. It’s making the outlines.”

The optix study2 showed that this 'paintbrush gene’, as Reed calls it, has a large role in pigmentation. Previous work had suggested that it was involved in red and orange colour patterns, but it took CRISPR to finally confirm that, says Reed. 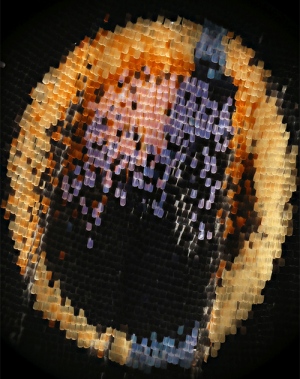 He and his colleagues knocked out optix in four butterfly species. Parts of the wings — as well as other areas of the butterflies’ bodies — turned black or grey. “One went entirely jet black,” says Reed, citing an example of an individual gulf fritillary (Agraulis vanillae). Most surprising, Reed says, in the common buckeye (Junonia coenia), its wings also developed spots of bright, iridescent blue, an indication of structural change beyond pigmentation.

The results indicate that optix affects colouring in a way that goes beyond simple pigmentation. Iridescence is created by certain microscopic structural features of the wing scales, so optix seems to be influencing both the pigment and the architecture of butterfly wings. The work provides “emerging evidence to show that this gene has probably played a huge role in wing evolution”, Reed says.

The more researchers are able to learn about WntA and optix, the more insight they will gain into butterfly evolution. These genes probably provide the framework for major adaptations, including mimicry — in which organisms copy the attributions of others in order to deceive predators as a defence mechanism, says Reed. The monarch and viceroy butterflies (Limenitis archippus) are textbook examples of mimicry3.

“It’s a beautiful advance and it shows you the strength of the CRISPR approach that seems to apply to any species,” says developmental neurobiologist Claude Desplan of New York University.

“For us who are studying butterflies, which are non-traditional organisms for a laboratory, CRISPR is opening a treasure chest of opportunities we haven’t had before,” says Martin.