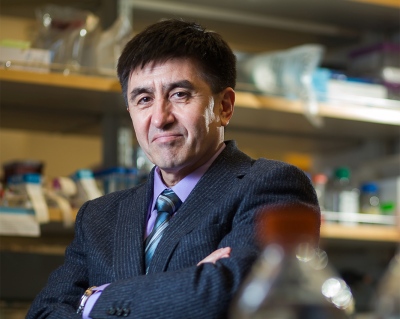 Reproductive biologist Shoukhrat Mitalipov and his team used genome editing to correct a gene that causes a potentially fatal heart condition in humans.

An international team of researchers has used CRISPR–Cas9 gene editing — a technique that allows scientists to make precise changes to genomes with relative ease — to correct a disease-causing mutation in dozens of viable human embryos. The study represents a significant improvement in efficiency and accuracy over previous efforts.

The researchers targeted a mutation in a gene called MYBPC3. Such mutations cause the heart muscle to thicken — a condition known as hypertrophic cardiomyopathy that is the leading cause of sudden death in young athletes. The mutation is dominant, meaning that a child need inherit only one copy of the mutated gene to experience its effects.

In the gene-editing experiment, published online today in Nature1, the embryos were not destined for implantation.

The team also tackled two safety hurdles that had clouded discussions about applying CRISPR–Cas9 to gene therapy in humans: the risk of making additional, unwanted genetic changes (called off-target mutations) and the risk of generating mosaics — in which different cells in the embryo contain different genetic sequences. The researchers say that they have found no evidence of off-target genetic changes, and generated only a single mosaic in an experiment involving 58 embryos.

Several teams in China have already reported using CRISPR–Cas9 to alter disease-related genes in human embryos. Work is also under way in Sweden and the United Kingdom to use the technique to study the early stages of human embryo development. That research is aimed at understanding basic reproductive and developmental biology, as well as unpicking some of the causes of early miscarriages.

For the latest Nature paper, embryo experiments were conducted in the United States and led by Shoukhrat Mitalipov, a reproductive-biology specialist at the Oregon Health and Science University in Portland. The United States does not allow federal money to be used for research involving human embryos, but the work is not illegal if it is funded by private donors.

In February, an influential report by the US National Academics of Science, Engineering, and Medicine concluded that scientists should be allowed to use gene editing in human embryos for research. The report also said that, ultimately, it may be acceptable to use the technique to alter embryos destined for implantation, if the goal was to treat a devastating disease and if there were no other reasonable alternatives.

Mitalipov’s team took several steps to improve the safety of the technique. The CRISPR system requires an enzyme called Cas9, which cuts the genome at a site targeted by an RNA guide molecule. Typically, researchers wishing to edit a genome will insert DNA encoding CRISPR components into cells, and then rely on the cells' machinery to generate the necessary proteins and RNA. But Mitalipov’s team instead injected the Cas9 protein itself, bound to its guide RNA, directly into the cells.

Because the Cas9 protein degrades faster than the DNA that encodes it, the enzyme is left with less time to cut DNA, says genome engineer Jin-Soo Kim of the Institute for Basic Science in Daejeon, South Korea, and a co-author on the study. “Cas9 is rapidly degraded,” he says. “There is little time for off-target mutations to accumulate.”

Even so, Kim notes that the CRISPR–Cas9 error rate can vary depending on which DNA sequence is being targeted. The MYBPC3 mutation, in particular, was predicted to produce relatively few opportunities for off-target cutting.

Just because the team did not find off-target changes does not mean that the changes aren't there, cautions Keith Joung, who studies gene editing at the Massachusetts General Hospital in Boston. "Although this is likely the widest examination of off-target effects in genome-edited human embryos performed to date," he says, "these investigators would need to do much more work if they wanted to define with certainty whether off-target effects do or do not occur in this context."

The researchers also attempted to reduce the risk of mosaics by injecting the CRISPR–Cas9 components into the egg at the same time as they injected the sperm to fertilize it. This is earlier in development than previous human embryo editing experiments had tried2, and studies in mouse embryos have shown that the technique can eliminate mosaics when the father’s genome is targeted3.

In an experiment Mitalipov's group performed in 58 human embryos fertilized with sperm carrying the MYBPC3 mutation, 42 contained two normal copies of the MYBPC3 gene. Because the sperm donor contained one normal copy and one mutated copy of MYBPC3, some of those embryos would have simply inherited the normal copy. The others were successfully edited to generate a normal gene. Only one was a mosaic. By comparison, the team found that 13 of 54 treated embryos were mosaics when the CRISPR–Cas9 machinery was injected 18 hours after fertilization.

The low rate of mosaics and the unusually high efficiency of gene editing make the study stand out, says stem-cell biologist Fredrik Lanner of the Karolinska Institute in Stockholm, who co-authored a commentary accompanying the article. Additional testing is needed to show that the low rate of mosaics holds true for other gene-editing targets, but for now, he says, "it's a huge step in that direction".

Lanner is also editing genes in human embryos, as a way of learning more about developmental biology. But he notes that in Sweden, it would be illegal for him to create embryos solely for the sake of research. Instead, he must use surplus embryos from fertility clinics (created using eggs that have already been fertilized), putting the kind of study that Mitalipov's team did — in which CRISPR–Cas9 machinery is introduced at the same time as sperm — out of reach.

The efficiency of gene editing in the Nature paper is exciting, says stem-cell biologist George Daley of Boston Children’s Hospital in Massachusetts. “It puts a stake in the ground that this technology is likely to be operative,” he says. “But it’s still very premature.”

Daley worries that the success reported in the paper could motivate a clinician to try the technique before it has been fully tested. He points to an experimental technique called mitochondrial replacement therapy, which aims to treat embryos for a disorder that disables energy-generating cell structures called mitochondria. Last September, news broke that a doctor had performed the technique in a fertility clinic in Mexico, even though many experts believed it was not yet ready for clinical practice. Since then, reports have rolled in of other clinicians performing the technique.

Developmental biologist Robin Lovell-Badge of the Francis Crick Institute in London shares those concerns. But he notes that worries about “designer babies” — children who have been genetically enhanced, rather than merely correcting disease-causing mutations — may be eased somewhat by the new paper. In their experiments, Mitalipov’s team provided a strand of DNA to serve as a template for rewriting the disease-causing mutation. But, surprisingly, the embryos did not use the template the researchers provided. Instead, the embryos used the mother’s DNA as a guide to repair the MYBPC3 mutation carried by the father’s sperm.

“This isn’t a clear step towards a designer baby,” says Lovell-Badge. “This suggests that you couldn’t add anything that wasn’t already there.”

An earlier version of this story incorrectly stated that all 42 embryos with normal copies of MYBPC3 were successfully edited.